While we're staying here at one place for a while, I thought I'd introduce you to some of the neighbors! We met Greg and Marilyn at our WiFi seminar and that same night they invited us over for 'pot-stickers' (they were really yummy). Here they are trying to enjoy 'camping' even tho it's *cold* outside. 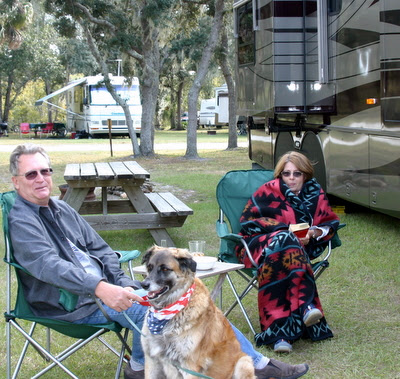 Greg and Marilyn are brand new 'full-timers'. I asked if they'd ever RV'd before and they said, "no". The first night they ever spent in an RV was in their own, brand-new, 43 ft, 4 slide Dutch Star motorhome. Wow! That's a major leap-of-faith I said. Their response? "Yeah, well, we like adventure." That's for sure. They had a successful business in Maine for many years when they were in their 40s. Each year they'd vacation in the winter by going scuba diving in Central America - Honduras and Roatan to be exact. After their last vacation, back in Maine, they found themselves dreaming about Honduras so much that they pulled up stakes and moved there. They sold their business and home in Maine, built a new home in Honduras and semi-retired. After 5 years and a couple devastating hurricanes they decided it was time to head back stateside. Where did they settle? Cape Coral Florida. In an attempt to recreate their jungle habitat from Honduras, they learned a lot about landscaping and developed a whole new career. Then they managed their property and several others thru 5 more hurricanes! No wonder they're ready for another adventure! Greg really wanted a Catamaran, but Marilyn convinced him to stay on dry land. They're still waiting for their house to sell, but all systems are go for traveling the country for at least a couple years, hopefully including Alaska. I hope to get them set up with a blog in the next few days, so you can follow their travels too. Later ... Ok, you can follow Greg and Marilyn at www.gundyville.blogspot.com
Posted by Chris Guld at 11/22/2006

Guys, this may be your best blog post ever. Sure wish I could get that pot sticker recipe. Love that SW style Florida snuggle blankie!!!

How can I miss with such excellent subject material?! :-)

I've seen people go out and purhcase a pop-up or travel trailer that have never been camping, but spending their first night ever doing anything like this in their own, brand-new, 43 ft, 4 slide Dutch Star motorhome as a full timer is incredible.
Congratulations and God bless you.

I've seen people that have never been camping buy a pop-up or travel trailer, but spending their first night full timing in their own, brand-new, 43 ft, 4 slide Dutch Star motorhome in incredible. Congratulations, and God bless you.