Probably the best part about the SEA rally, was having a booth where people could come by and chat.  I loved chatting with Gayle who learned how to blog from us, several years ago, and wanted to brush up on her skills so she would be sure to keep up her blog during two big trips she has planned for later this year.
And Penny who told us that it was our tutorial videos that made it possible for her to go RVing on her own.
She had never driven outside of her home area and had no confidence that she could navigate her way to Branson which was her first destination.  She took our seminar and bought our videos about MS Streets and Trips then went out and bought the program.  She opened the program in one window and our Show-Me Videos in another - she went back and forth between the videos and the program until she had planned her trip.  Then she used the GPS navigation features as she drove.  She's now confident that she can get anywhere.  Several people also came by with their computers for Jim to look at some problem.  Some of them he fixed, others I heard him say, 'Yeah - you got a problem!'  No charge! 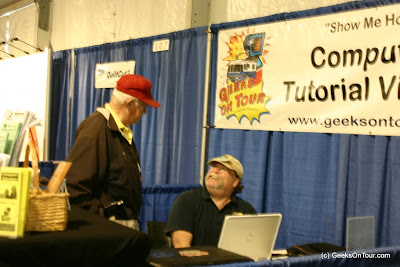 We presented 4 seminars; Blogger, Picasa, GPS and Streets and Trips, and Internet on the Road.  A lot of the audience already knew us, but I think we made a few new friends.  We were pretty excited to be able to pass out free trial disks of Streets and Trips 2011.  Other than the folks at Microsoft, I think we're the only ones to get our hands on these disks!  And now, everyone who came to our seminar also has one.