Let me begin at the end ... we are #SafeAndSound in Summerdale, Alabama at the Escapees RV park called Rainbow Plantation. We got here about 5pm on Sunday, 9/10/17 after a 400 mile drive from Gainesville.
But, it wasn't always clear what to do. As we sat, comfortably, in Gainesville, the eye of the hurricane was still between Cuba and Key West, heading west. The hurricane trackers showed that it was going to come north - but it kept heading west. We knew that other RV friends Chris and Charles Yust, as well as Chris Dunphy and Cherie Ve Ard (Technomadia) had escaped Florida and settled at the Alabama Escapees park. Chris Yust even called us on Saturday, essentially to say - "Get your butt over here NOW"

Looking at the image above, it seems clear that we should follow our friend's advice and head west, right? But it wasn't that clear on Saturday. We needed to leave, but it wasn't clear which direction to go. We actually said good-bye to our wonderful hosts, Alex and Jim, pulled the electric plug and put the key in the ignition. 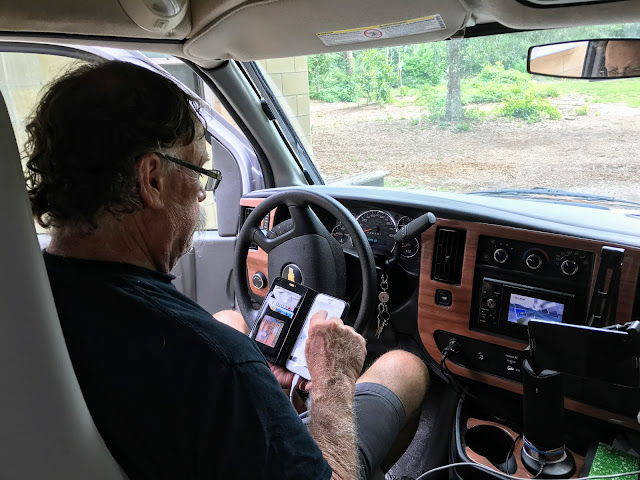 Then we started studying this image: 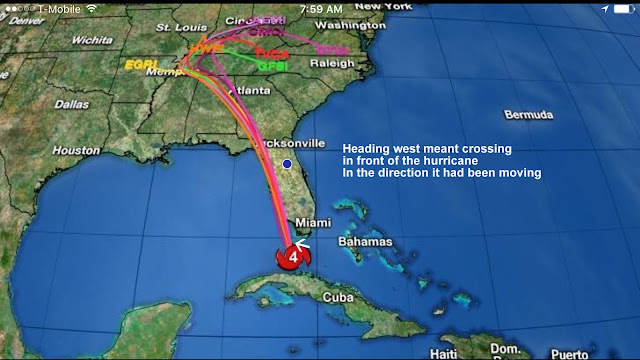 It just didn't seem right to get on the western side of this thing when it could still be headed that way. If you've ever watched the movie Ghostbusters, you know:

So we sat there and looked at more maps and more options. It appeared that our home in Fort Lauderdale was going to be spared. Could we just go back now? If it did continue west, then heading east - and up into Georgia would be good. But, if it did go straight up, Georgia would be on the more dangerous side of the storm. We had a full tank of gas, but we didn't want to squander any of it because most gas stations were empty.
So we sat there.
and we sat there.
and we stayed there.

We told Alex to make the dinner reservations for 10 instead of 8 and we enjoyed another evening of the "Irma Palooza" party.

Sunday morning was rainy and a little windy. It didn't have anything to do with Irma - but it gave us a bit of a kick-in-the-pants anyway. Not to mention the squealing alarms coming from our phones since the night before: 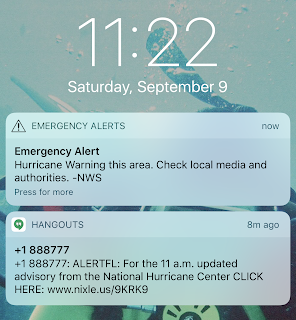 The storm had taken its predicted turn to the north, so we said our goodbyes - again - and hit the road. There was no traffic at all, and we found a Flying J gas station near Tallahassee where we topped of the gas tank. We were heartened to see all the electrical bucket trucks and other emergency vehicles in caravans heading to south Florida.

Email ThisBlogThis!Share to TwitterShare to FacebookShare to Pinterest
Labels: hurricane

I still think you guys made a wise choice to head north and west to get away from the storm. Hopefully, Irma will have lost a lot of steam by the time it gets up to your latest destination.

Glad to hear you are Okay.

Glad to hear you are both ok. Hope the house made it through the storm.

Whew!! Will look forward to good news about your house.