The Decade of The Geeks

I've gone down the rabbit hole of looking at our memories for the last 10 years and I'm realizing what a significant decade it was ...

Although the iPhone came out in 2007, it required an AT&T contract and we were dedicated to Verizon, so we had to wait for the first smartphone on Verizon. That happened to be the Android-based phone by Motorola, called "Droid." It came out at the end of 2009 and we both got one.
Here's what we said in our 2010 year-end Newsletter: 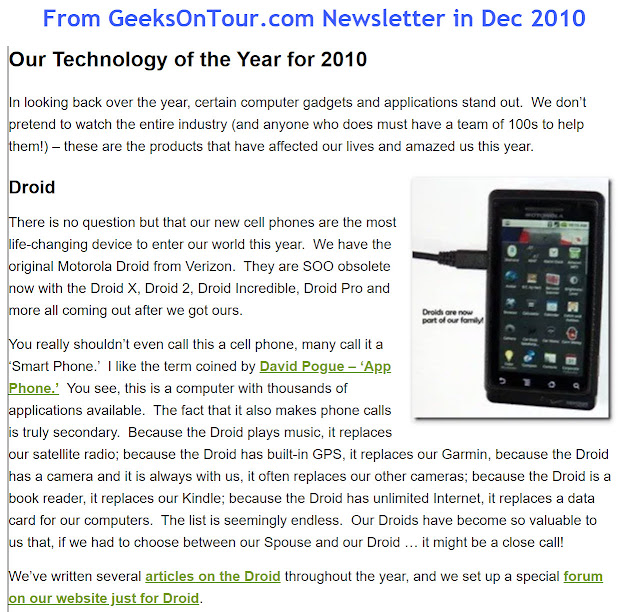 Jim just got a new phone for 2020 - The Google Pixel 4XL, not realizing it was exactly 10 years ago that he got his first phone. We dug it out of the drawer so we could take a photo.

As people who are passionate about learning new things, we're sure in the right field with teaching technology! There's something new to learn and teach every day with these.

Picasa, the computer photo management software from Google was the most popular thing we ever taught. Here is our record-breaking live audience for an Introduction to Picasa seminar in August of 2010.

I wrote a book on Picasa, and everywhere we went, we were known for teaching Picasa. In 2009 Google invited us to present a joint webinar on Picasa. It's still available on YouTube.
That all came to an end when Google discontinued the Picasa software in 2016. By then, we had created over 100 tutorial videos on Picasa, a couple hundred articles, and had presented dozens, maybe hundreds of seminars.
Time to move on to Google Photos - Google's Cloud-based photo management system. But, somehow, I don't think it will ever be quite the same as our Picasa teaching days.

In 2010 we started doing little video segments called "Gabbing with the Geeks", the predecessor to our current live YouTube show "What Does This Button Do?"
Here are our first 3 episodes - they're just a few minutes each:


It's a good think Jim lost weight eh? Any pictures of him from 2014 on look MUCH better!

2010 was when we first unveiled our website based on the WordPress platform. Before that (2007-10) our membership system was based on code I wrote using Coldfusion (yikes) and a straight HTML website built with Dreamweaver. Don't get me wrong, I'm very proud of myself for having built that, but, a coder I am NOT. To see what our website looked like back then, here's a link to the Wayback Machine and a page from GeeksOnTour.com in 2008.

In 2010 we were still living full time in our first ever motorhome, a 30 foot, no slides, class C.

What does this Button Do?

As we slow down a bit with our RV travels, that means we are going to fewer RV rallies. But, we get to do our teaching now thru our Live Streaming YouTube show - What Does This Button Do? Our very first episode was in June of 2014.
We are now on episode 183! You can see them all at GeeksOnTour.com/weeklyshow

I can't wait to see what the next decade brings!

Watch any episode of our Online Show on Learning Smartphones and Tablets!
What Does This Button Do?
Posted by Chris Guld at 12/29/2019 No comments: