Having Facebook friends who travel is great for getting ideas. Sometime last year I noticed a post from friends about Faywood Hot Springs in New Mexico and they liked it. We love hot springs and I knew that Faywood would be somewhere near our route headed from the west coast back to Florida so I put it on our list.
We made it!
They had a full service RV park right there at the hot springs. All we had to do was wrap a towel around us and walk past a couple of sites to these pools. You could also call them the Goldilocks tubs: the one on the left is too HOT, the one in the middle is too cold, and the last one is just right! Actually we spent most of our time in the HOT one!

We figured on one night here because Sunday was the next day and we needed to be in a good Internet area to do our webcast show. Lo and behold, there was a Verizon tower within line of sight of the hot springs! We stayed 3 nights!  Here's the show we did that week - it was an especially good one I think! We demonstrated Google Now.


Then, since we had time to spare, we visited a local winery and a State Park called City of Rocks.

There is an RV park here also, but it's too far from the Verizon tower. If we had decided to stay here, we would have had to move on.

Fantastic day! It was a snapshot of what this lifestyle is all about. Work all morning, present our webinar on smartphones and tablets, then soak in hot spring pool in campground where we're staying. Icing on the cake, take a drive to attraction City of Rocks, then a nearby winery (Esperanzas) then dinner at a wonderful cafe Diane's in a historic town (Silver City, NM), back home, one more soak before bed.

Watch our Weekly Online Show on Learning Smartphones and Tablets!
What Does This Button Do?
Posted by Chris Guld at 4/14/2015 No comments:

After leaving Malibu, we retraced our steps back - something I hate to do! We stayed at Thousand Trails in Palm Springs, then Leaf Verde in Buckeye. Then, we were hoping to take a different route east from Phoenix since we've traveled I-10 between Phoenix and Tucson so many times this season!

But ... as it turns out, we just hired a company to help us renovate our website and the consultant assigned to us lives in Tucson! I love that so much can get done with a team online, but I'll never pass up an opportunity to meet face to face. So, we traveled I-10 to Tucson ... again ... and had a nice meeting with Leigh while staying at Catalina State park. 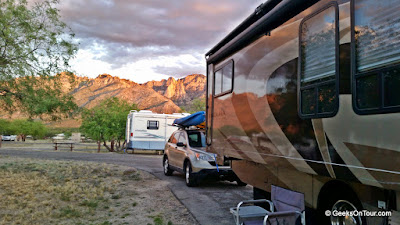 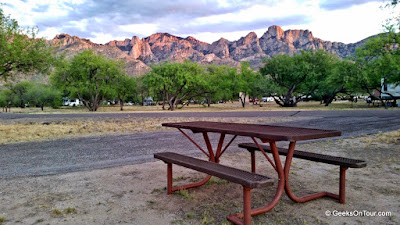 Our destination was Faywood Hot Springs in New Mexico (because we saw it on a friend's Facebook posts!) so, after leaving Tucson we stayed on I-10 east. When Jim saw a sign saying "Tombstone Next Exit" he said, I want to go there. I said, "OK." That's all there was to it!

I checked my Allstays Camp and RV app on my phone to see what campgrounds were available and found one right in the middle of historic Tombstone called Wells Fargo. Cool. We checked in about 2pm, figured we could do a little sightseeing, have dinner, and leave in the morning. But Jim had to call Dr. Jay first. Dr. Jay is someone Jim met at the FMCA rally in Redmond, Oregon last summer. He held on to Dr. Jay's card with a note that said, if you're ever in Tombstone, look him up and take a tour. Jim called and got such a warm welcome from Dr. Jay that we just had to stay another day in order to take his tour in the morning. I sooo love having the flexibility to do this kind of thing. 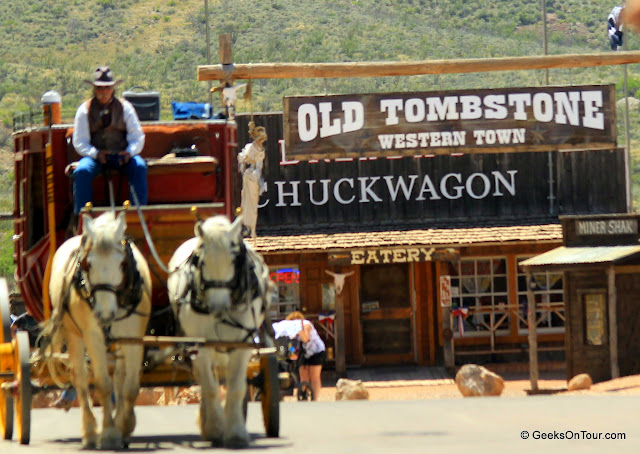 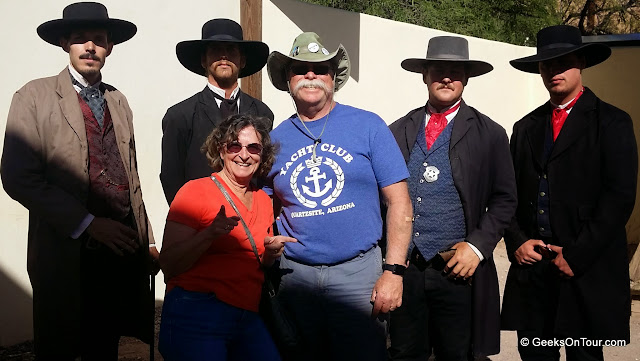 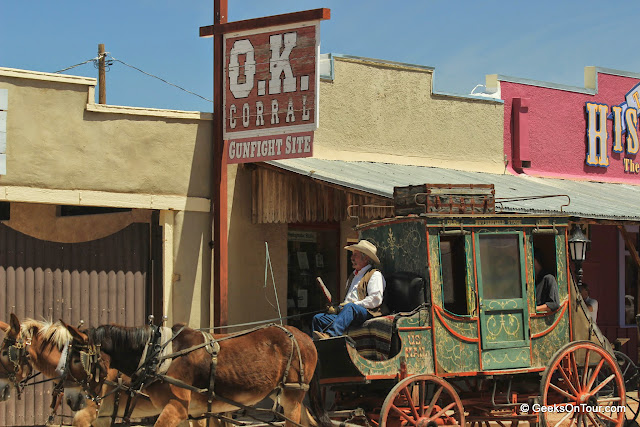 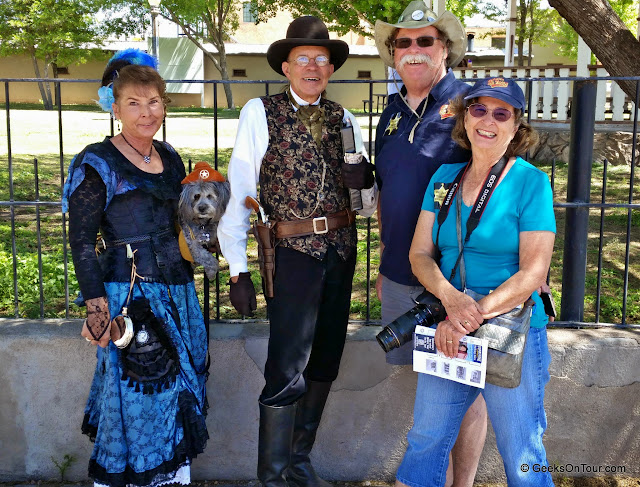 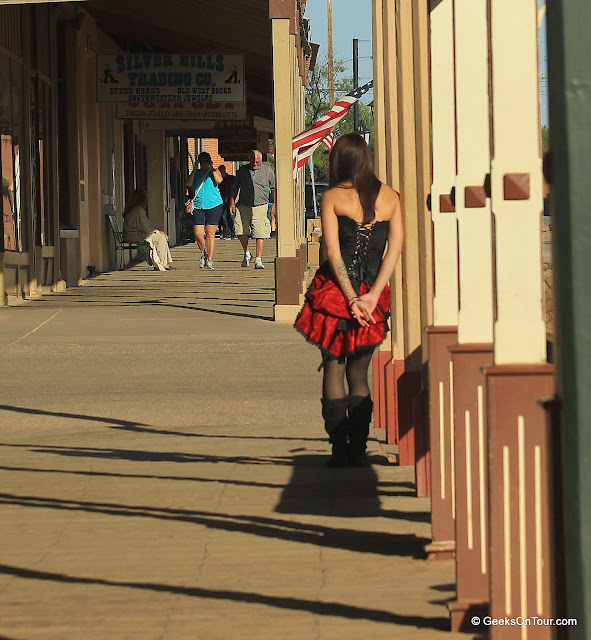 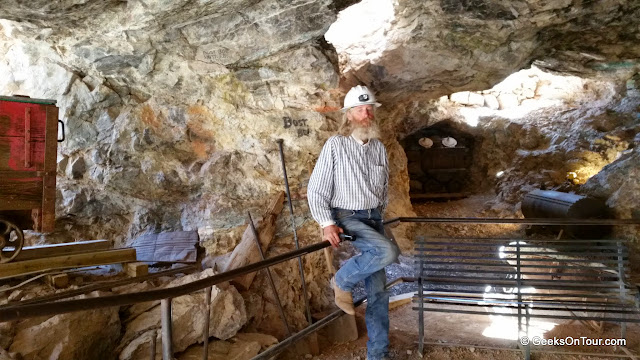 Although Tombstone is known as the place where Wyatt Earp had the shootout at the OK Corral, that was just a tiny blip in it's history as a mining town. So, we took the mine tour as well as the re-enactment of the shootout. And, at home during the evening, we rented the movie Tombstone with Kurt Russell. GREAT movie, and what a treat to get the live tour of the place the next day! We love watching movies filmed in the places we're visiting.

Watch our Weekly Online Show on Learning Smartphones and Tablets!
What Does This Button Do?
Posted by Chris Guld at 4/11/2015 2 comments:

From Sea to Shining Sea

We started our trek east on April 2. Since we started from Malibu beach, overlooking the Pacific ocean, and we'll be ending when we reach Fort Lauderdale, Florida, I can't resist calling it "From Sea to Shining Sea!" 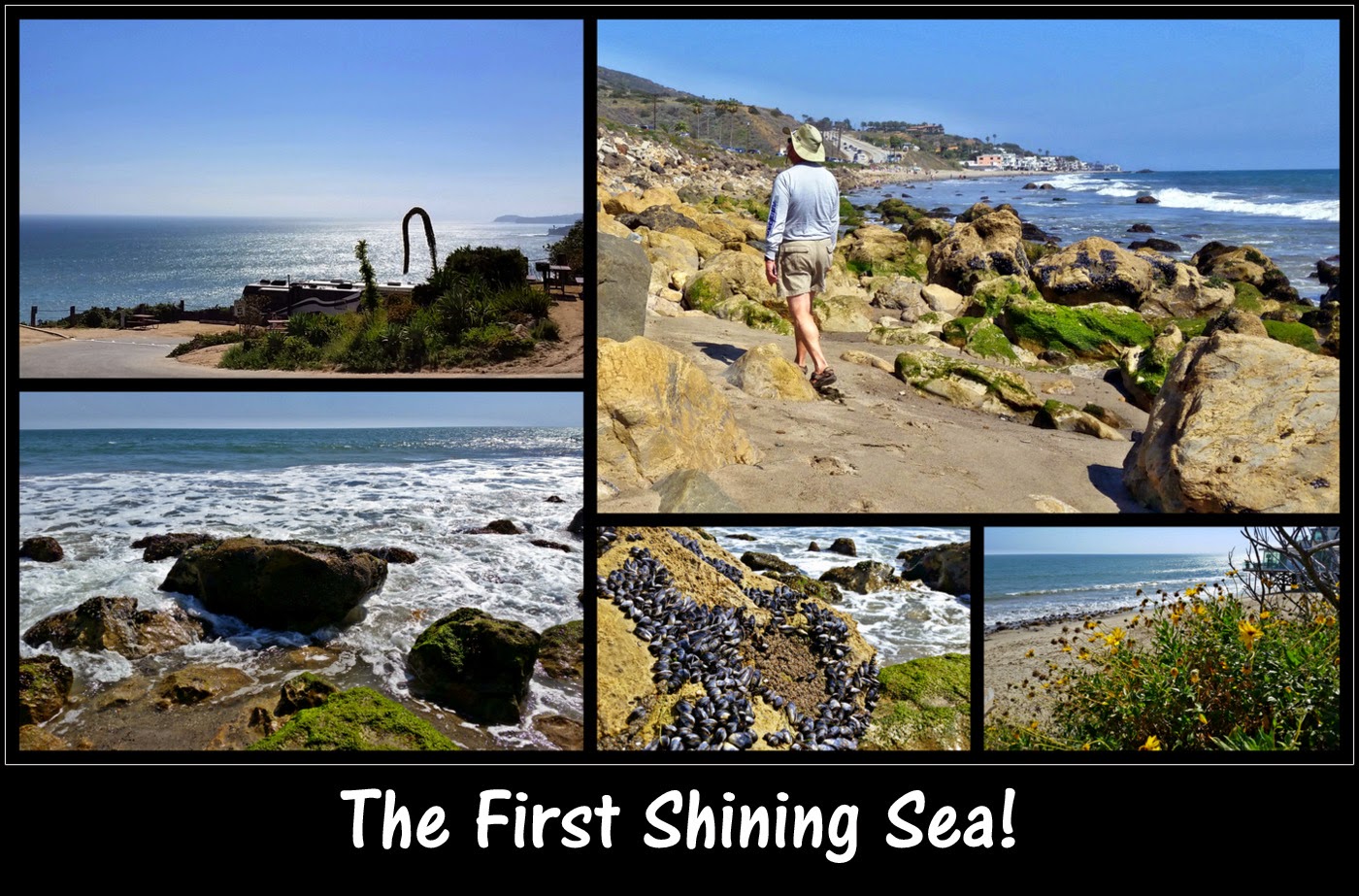 And, I recorded the GPS turning directions for posterity!

If I remember, I'll come back to this post and complete it when we've reached the other ocean!

OK ... here's a video made after we got to Florida:
Further your computer education**Subscribe to the Free Geeks on Tour Newsletters**

Watch our Weekly Online Show on Learning Smartphones and Tablets!
What Does This Button Do?
Posted by Chris Guld at 4/02/2015 No comments: