Travel to the Next Rally

First, I just have to show you a little bit of video to get the rhythm of the road, and the beauty of the midwest.


When we're in serious driving mode like this, one of our favorite things to do is read a book. I read out loud while Jim drives. I know, we could get audio books, then I wouldn't have to work so hard! But, I kinda like it. Right now, we're reading the book Abundance, and it's making us feel SO good!

There really are possible solutions for all the seemingly insoluble problems of the world and technology plays a huge part. I said "possible" ... "probable" is another story, but it makes us feel good anyway.

We stayed overnight in Cincinatti at the small campground provided by the FMCA for members. We had to stay put till Sunday afternoon so we could do our Sunday show "What Does This Button Do?" We put episode #46 'in the can.' Here it is:


When we left Cincinatti, we made it to Normal, Illinois and stayed overnight at a Cracker Barrel. These are great places for overnight RV parking - you don't have to cook dinner, OR breakfast! 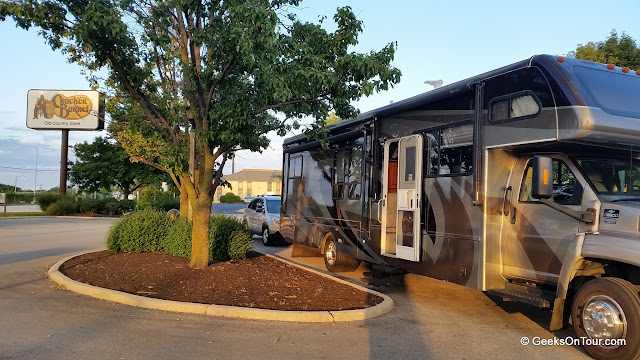 Watch our Weekly Online Show on Learning Smartphones and Tablets!
What Does This Button Do?
Posted by Chris Guld at 7/28/2015 3 comments:

As we drive around here and visit the local restaurants we keep saying we've got to come back here when we have more time. 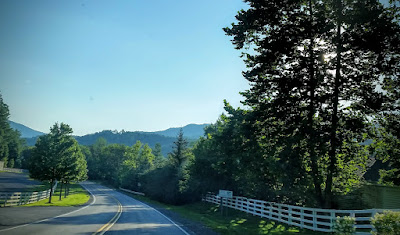 This area of West Virginia is gorgeous and there are bike trails and lakes to kayak in.

But we're here working this time. Our seminars are going great and we're doing one on one help desk sessions for smartphone users. 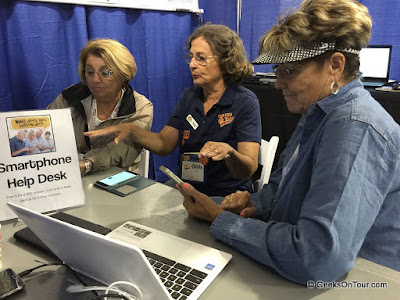 We're also having great fun with the new Google photos here's a little movie that it put together.


And, here's the video from Jim and his quadcopter. It shows the rally grounds from an aerial point of view, as well as the Fireworks show on the last night.

Let me tell you about the RV lifestyle and friends

Except for a weekend trip with the grandkids, our Motorhome has been parked since late May. It's now mid July and we're back on the road. Leaving Fort Lauderdale, Florida, our destination is Lewisburg, West Virginia for an RV Rally where we'll be doing our technology seminars.
Florida is a very long state, and you don't get all the way thru it in one day. We usually like to get north of Orlando on our first day of travel and we have a couple of standard spots where we've been before.

While checking into RVillage (a social network for RVers) we saw a notice from Curtis - a friend and the founder of RVillage - that he was having some work done on his RV and he was in Sanford, FL. Hey! That's just north of Orlando. I wonder if he's up for a visit? We exchanged a couple of messages on RVillage and planned to stay in the area for one night.

We hadn't been to Sanford before, so we consulted Allstays Camp and RV app on our phones and found a County park with a couple miles of where Curtis was getting his RV serviced. Perfect! We got in about 3:30 - just in time to settle in and go see Curtis in time for happy hour and dinner at some place in town. 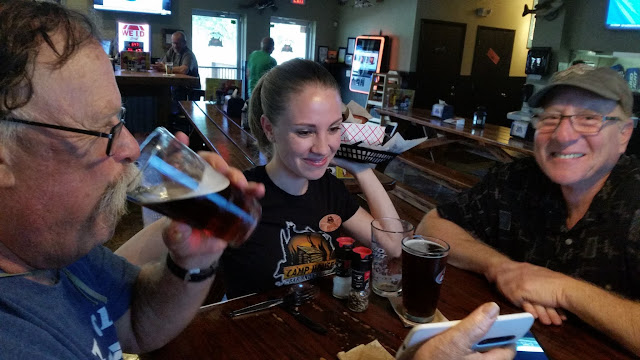 We met Curtis last summer in Indiana, spent some time at Christmas with him in Arizona City, then again in Quartzsite, AZ. Partied with him at a rally in Pomona, CA in March and now here in Florida. That's how friendships amongst RVers go. You're as likely to see each other 3,000 miles away as around the corner.

As it turned out, the County Park we chose had a very nice trail the passed right by our campsite. It was in our Traillink App by the Rails to Trails conservancy - so we had to give it a try before we left the next day. Beautiful! 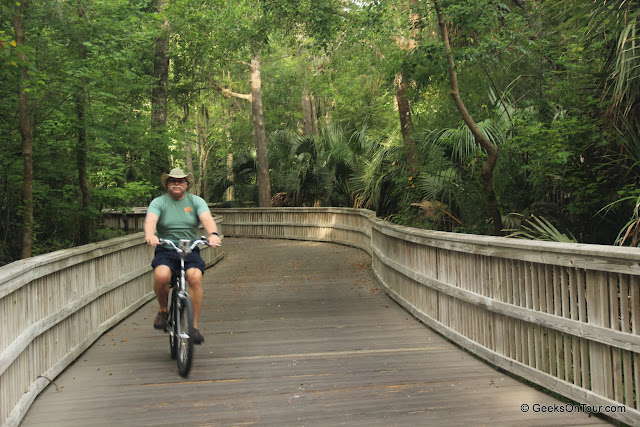 After the bike ride, we hit the road at our normal noonish timeframe and just drove for as long as was comfortable, then we checked our Passport America app for a 1/2 price park ahead. We found one in St. George, S.C. - pulled off the road, made some dinner and went to sleep.


Getting an earlier start the next day, we looked at the Passport America map and saw that there were pretty slim pickin's in the 2-300 mile range in the direction we were going, but the one in the right place was Mayberry RV park in Mt. Airy N.C. - that's where the Andy Griffith show was done. We'd stayed here before and knew it to be a very nice park. AND, my long-time friend Emily lives in the area. I wonder if she's home? I sent her a facebook message, and followed up with a phone call when we got parked. It went something like this, "Can we get together tonight?" Luckily we could! 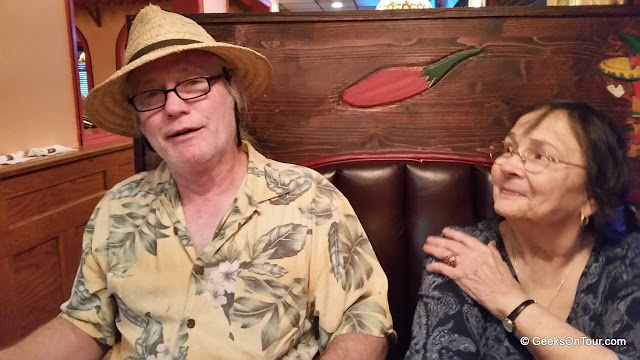 We had a great dinner out and had the opportunity to catch up with a dear friend.

Such variety this RV lifestyle allows ... meeting up in new places with new friends, and catching up with old friends because you're in their neighborhood. And, quiet alone time in between.

Watch our Weekly Online Show on Learning Smartphones and Tablets!
What Does This Button Do?
Posted by Chris Guld at 7/15/2015 1 comment:

July 4 is a special day. A national holidy, Jim's and my anniversary, and just a great day to go diving in South Florida! So we did. 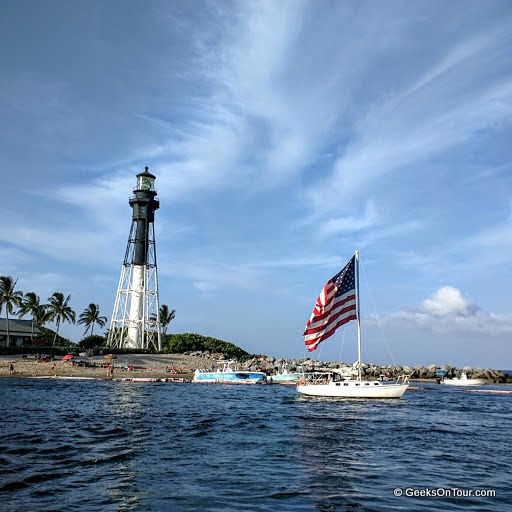 Watch our Weekly Online Show on Learning Smartphones and Tablets!
What Does This Button Do?
Posted by Chris Guld at 7/06/2015 No comments:

It's 4am and I am wide awake! That's what happens when you've been in England for the last 2 weeks and now we're back in Florida! It's 5 hours later in England ... that's 9am. Do I force myself to go back to sleep? Or take advantage of the awake, quiet time?
One of the things waiting for us in the mail when we got back home was the book made by Blog2Print of our 2007 year. I've been making books of this blog for every year, just in case something should ever happen to this web version AND because I love thumbing thru these beautiful coffee table books. Blog2Print also give me the ability to show a flip-book on a website. Not sure how that looks so let's try it ... be patient, this will take a while to load I'm sure.


I so enjoy thumbing thru the books of past years of this blog. I notice that my writing wasn't always in full episodes of our travels, sometimes I just posted one paragraph about something silly. I am re-committing to writing in here again, I will go back and write posts for what I've missed.  If anyone tries to follow us by reading this blog, they think we're still in New Mexico. The last entry is from April in Faywood Hot Springs, New Mexico. It is now July and we've completed the cross country drive back to our home in Fort Lauderdale with one rally and several enjoyable stops along the way, gone scuba diving, taken the grandkids to Orlando, and had an action-packed two week trip to England and Belgium. I really must write about it! I will want to print the book for 2015 someday and I don't want there to be a big blank spot!
We've been busy. So busy I just haven't been capable of doing everything AND writing about it, so I just do it! That is the important part after all. And Facebook makes it so easy to post pictures and short stories that I don't feel the urgency to write in the blog. Jim suggests I use my Facebook posts to fill in the blanks in the blog ... good idea!
But, now that I'm awake at 4am, I have time to do that :-)
Together, Jim and I took over 2,000 pictures while in England and Belgium. Going thru all of them and picking the ones I want to share is another overwhelming task! Luckily the new Google Photos was released just before we left for our trip and it does all the heavy lifting for me. Without my lifting a finger, Google delivered this "Story" that puts together 315 pictures, video clips, and maps into a total coverage of the trip.  I still need to go thru everything myself, but this is pretty cool. Just click on it to open, then keep clicking the right arrow at the right edge to flip thru the pages. When you see a video you can play it, then click the Back arrow - not the browser's back arrow, the back arrow on the top left of the story itself - to return to the story.

Watch our Weekly Online Show on Learning Smartphones and Tablets!
What Does This Button Do?
Posted by Chris Guld at 7/03/2015 3 comments: