Escapees (SKP) is the name of a club of people who have 'escaped' the conventional lifestyle in favor of adventure by RV. Many people in this club are full-time RVers. We've known it was a group we should belong to, but we didn't get around to joining until just a few months ago. So, when we got notice that there was a Florida chapter meeting for a rally right here by Fort Lauderdale, we wanted to go. It just didn't work out for us to participate in the rally. The rally started on Monday and goes thru Friday, and Jim has office hours Wed-Thu-Fri, so we just went to happy hour on Monday. As it turned out, it was kind of an old home week! Cliff and Marie were the first people we saw ... and they've been parked right across the street from us at Paradise Island all winter. Then there was the hostess .. Sue Spahn. We looked at each other and went thru a kind of 20 questions until we figured out that we knew each other from involvement in computer education here in Fort Lauderdale back in the 80s!

It was a fun evening. Escapees are well-known for their happy hour get togethers! We are also planning on going to their national rally - the Escapades - in June (oops, make that May) in Missouri. We should be presenting a few of our seminars there.
Further your computer education **Subscribe to the Free Geeks on Tour Newsletter**
Posted by Chris Guld at 1/27/2009 4 comments:

Since we came back from Peace River, I just haven't had much to talk about. We're working on getting a couple seminars scheduled at Thousand Trails, Orlando - so we'll roll the wheels again soon. And, there's an Escapees rally here locally next week - we won't take the RV, but we're going to go check out happy hour! But, mostly we're just like normal landlubbers - working and visiting with family and friends. And, of course, watching the inauguration yesterday ... I never thought I'd see the day. I'm not talking about a day when a black man became president of the United States. I'm talking about the day that millions of Americans were motivated to get out and cheer for something good. I just didn't think we were a people who did that. It warmed my heart and brought tears to my eyes. I came of age in the 60-70s. We gathered occasionally, but only to protest the bad, not to cheer the good. The only 'cool' way to be was cynical and negative - or just not care at all. I thought that was characteristic of being American. I thought that was the intelligent way to be. I think I like this new us. We can get more done when we're moving in the same direction instead of fighting each other. Or maybe I'm just feeling what it's like being on the 'IN' side instead of the 'OUT.' ? To see what the day was like actually being there, check out Elliott Masie's blog. I wrote about Elliott in the past blog post. (I do love blogs!) And, talk about a historic day and a great blog. Go take a look at George's blog for yesterday ... he went flying in an Ultralight over the Mexican beach where he is living in his RV. He shares it with us thru a video. What fun. You GO George!
Further your computer education **Subscribe to the Free Geeks on Tour Newsletter**
Posted by Chris Guld at 1/21/2009 1 comment:

Email ThisBlogThis!Share to TwitterShare to FacebookShare to Pinterest
Labels: musings

Just last week, we made the conversion from analog to digital for watching TV in our motorhome. We are blown away by the difference in quality of the picture. And, we get another channel now too ... ION tv. This is not necessarily a good thing. ION has 3 hours of Boston Legal on Tuesday and Wednesday nights. I got absolutely nothing done last night, just watched TV. For the complete story of our analog to digital conversion, see my weekly article for RV.net: Digital TV for the RV.
Further your computer education **Subscribe to the Free Geeks on Tour Newsletter**
Posted by Chris Guld at 1/15/2009 No comments:

We woke up to a foggy morning. It brought back more memories. We stayed here the whole winter season in 2006-07 and saw many foggy mornings. 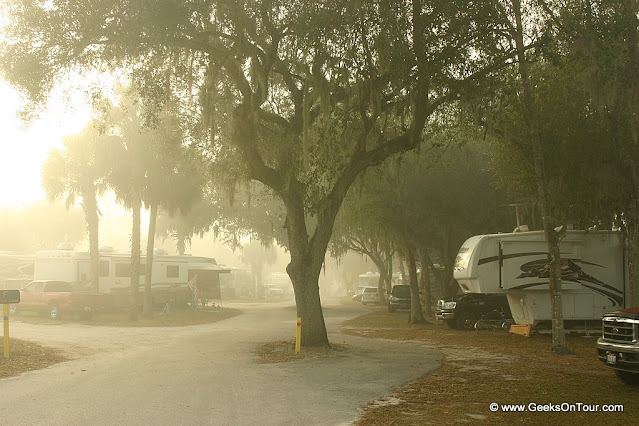 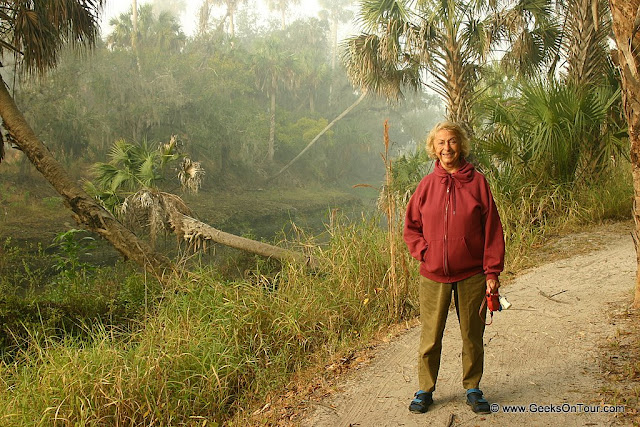 We brought Mom along, and she enjoyed her cozy spot in our cab-over bunk. (to learn how I made the dreamy, soft focus effect, see our weekly Picasa tip) 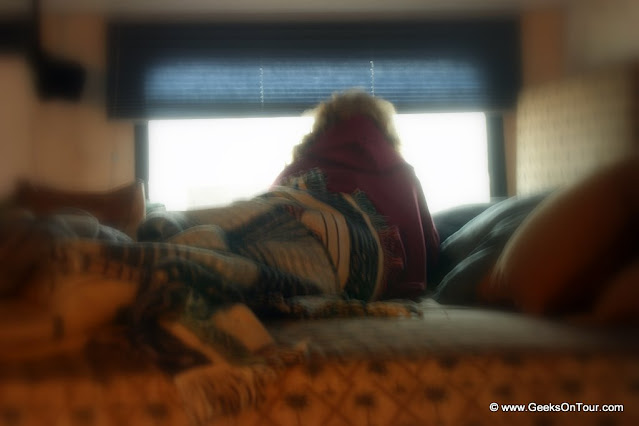 As long as we planned to come over here for a few days, we figured we might as well put on a couple seminars. We announced it in our newsletter that went out about a week ago, and we heard back from a few folks that were staying here at Thousand Trails, saying they were looking forward to attending. 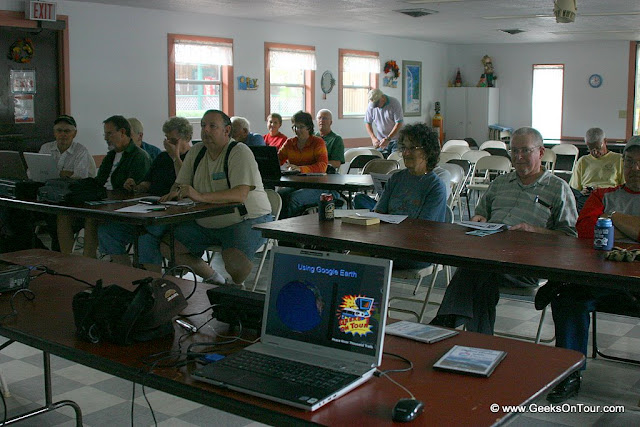 We also heard back from a reader who is staying at a park just up the road ... Torrey Oaks ... and he suggested we present a seminar there too! So we did. Everything went great. We taught our Picasa seminar at Peace River and at Torrey Oaks, then we taught Google Earth the next day at Peace River. And, after the Google Earth class we met a woman in the audience who said she was actually staying at the Escapees park right around the corner, and she said we should give our seminars there too! hmmm ... with 3 parks to work, I might be able to talk myself into another whole season here?!?  Our students are just the *best* people - don't you agree?! :-) 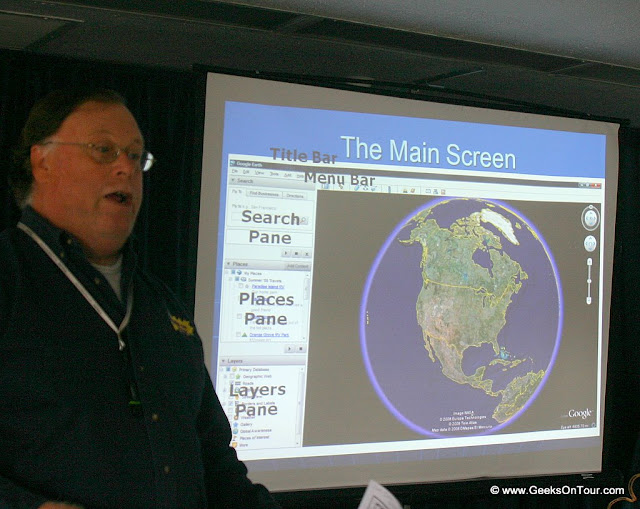 Further your computer education **Subscribe to the Free Geeks on Tour Newsletter**
Posted by Chris Guld at 1/13/2009 No comments:

A Weekend at Peace River

These tires gotta roll! So, we scheduled a weekend at Peace River Thousand Trails. We also scheduled a couple of seminars while we're here. It's just as gorgeous as ever:

Further your computer education **Subscribe to the Free Geeks on Tour Newsletter**
Posted by Chris Guld at 1/11/2009 1 comment:

We so enjoy our Toastmasters club! Jim gave a 5 minute speech yesterday and he told the story about how his parents met. It was so sweet and he presented it so well. I wish I had taken the video camera and not just the still. His Mom passed in 2006 - I know that Jim, and his Dad, think about her all the time. She would have liked this speech.

Meanwhile, you can see his Dad's version of the story on his Navy Log Memories page. (this links seems to only work with Internet Explorer - *not* with Firefox) You can also view his Dad's navy profile, and his Mom's navy profile. Isn't the web wonderful! Jim went on to tell of how his Navy family lived in Key West and Jacksonville, FL during the years of Castro's takeover of Cuba. Then on to San Diego - traveling across the country in a travel trailer. He even spent some time in Iceland, during grade school. He wants to go back and visit Iceland again someday! And, here he is receiving the Best Speaker trophy!

Further your computer education **Subscribe to the Free Geeks on Tour Newsletter**
Posted by Chris Guld at 1/09/2009 5 comments:

Email ThisBlogThis!Share to TwitterShare to FacebookShare to Pinterest
Labels: daily

This is something I really want to do (travel in our RV throughout Mexico). My very first RV trip, in 1962 -when I was 10 years old, was when my parents packed up a truck camper and traveled from Alaska (where we lived), all the way thru Mexico and into Guatemala. I'm sure that trip has a lot to do with my wanderlust today.

So far in Jim's and my RV travels, we've spent winter months in Florida, Arizona, Texas and a little in California - the only thing left is Mexico! I'm prompted to write about this because Nick Russell, in his blog today, writes his opinion that travel in Mexico is not for him. He cites tales of violence and travel alerts. I read Nick's blog religiously - his writing is wonderful and he's always talking about the RV lifestyle. I just want him to be wrong on this one!

Another RVing friend of ours, George, has spent several of the last winters in Mexico. I love following his blog, and the pictures of his campsites are mouthwatering!

In this post, George speaks of how he loves his RV lifestyle and being in Mexico.

Further your computer education **Subscribe to the Free Geeks on Tour Newsletter**
Posted by Chris Guld at 1/05/2009 9 comments:

I always long for adventure and travel. I just can't imagine a better lifestyle that living in an RV, traveling the highways of this huge country, and never knowing what tomorrow may bring. As we have been settled in one spot for a few months, I start to feel that life is bland. I tell Jim that we're boring, it's been so long since we've traveled.
Then I look at the Blog. Thank heaven for the blog and our pictures to remind me of our wonderful life! I mean, how many people do you know that have been in more than 20 states this year? And, not by plane and hotel. We *lived* in 20+ different states.

I find myself lamenting that we aren't doing the kind of sales of our Tutorial Videos that I think we should, then I realize that we only first developed our Tutorial Video DVDs in January of this year. It was at the Pomona FMCA rally that we confirmed that people liked our tutorials enough to pay for them! That seems like so long ago - but it was just in late February of this year. Then, this summer we had a real 'Tour' of several RV Rallies where we did our seminars and sold our tutorials. We finally visited New England - something that was on our list since our first year on the road. We saw Niagara Falls - a place I had never been. We filled in our map of visited states - all except North Dakota! Gotta leave something left to do! Then, we've finished the year by being here in South Florida - without a doubt the best weather in the country - and surrounded by so many family and wonderful old friends. We have really had it *all* this year. Life just doesn't get much better. This will be hard year to beat! But, we're going to try in 2009! Here's our 2008 in pictures - unfortunately, the quality suffers in the upload and formatting process. It was just a few clicks to create this slideshow movie using Picasa 3. It automatically makes the pictures play in the exact length of time it takes for the music to play. I just could not cut down the pictures to less than 156! So, it has to flip them pretty fast to fit the 2.5 minute song. I chose the 'I'm into something good.' song from Herman's Hermits after seeing them live in concert at the Pomona FMCA convention. We kind of adopted this as our theme song :-)

For our members who want to learn how to do movies like this with Picasa - there is a tutorial video on the Picasa page. It's called "Make a Movie from Photos."

Further your computer education **Subscribe to the Free Geeks on Tour Newsletter**
Posted by Chris Guld at 1/01/2009 3 comments: