No posts for June?!

In looking back thru the blog, I noticed that there was not one post for June or July in 2022. That's no good! I use this blog as my personal journal. Years from now what will I think when I have no record for these months.

One thing I have been absolutely consistent with for the last 15 or so years is a monthly newsletter for our Geeks on Tour business. I start out with a little recap of our lives and work for the past month. Rather than come up with something now to fill in for June, I'm going to copy the beginning of that newsletter. The whole newsletter can be found here. And, the archives of all the newsletters can be found at https://geeksontour.com/recent-newsletters/

From our Geeks on Tour monthly newsletter for July 2022. It always starts out with a recap of the month before.

Google maps is trying to kill us!

We depend on google maps to get where we want to go, whether that means In Florida or Florence, Miami or Maldives. Usually that means driving directions, but here in Italy we've used walking directions a lot. They work great, especially with the live view that can see exactly where you are. 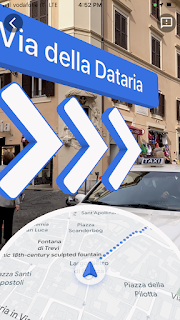 When you use any tool as often as we use google maps directions, you're bound to discover some warts and we found them yesterday. We wanted to go to a restaurant that was just Mile or so away, walking shouldn't be a problem right? Well apparently there'll  just aren't many sidewalks in this part of Catania in Sicily. If google maps finds no reasonable walking route, what is it supposed to do? It should probably inform you "There is no reasonable walking route to your destination." But that's not what it did. It went ahead and directed us to walk on what should be a driving route only. 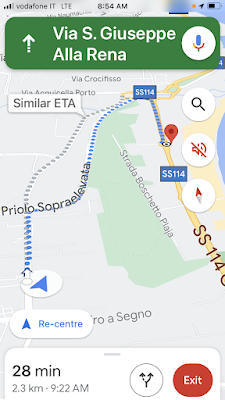 Check this out - we were literally taking our lives in our hands walking on a very narrow shoulder with sharp-thorns on the bushes to our left and cars, trucks, and busses whizzing by on our right. In driving around Sicily we've often noticed cars ignoring lanes and riding partly on the shoulder. Yikes!
We made it in one piece. We're alive. And we had a wonderful dinner at La Barraca. 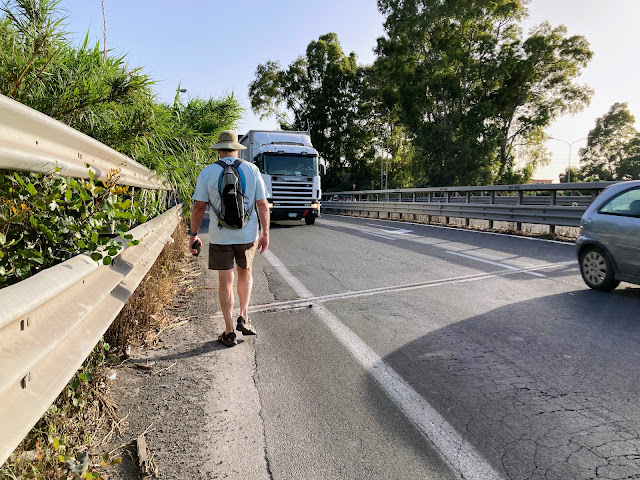 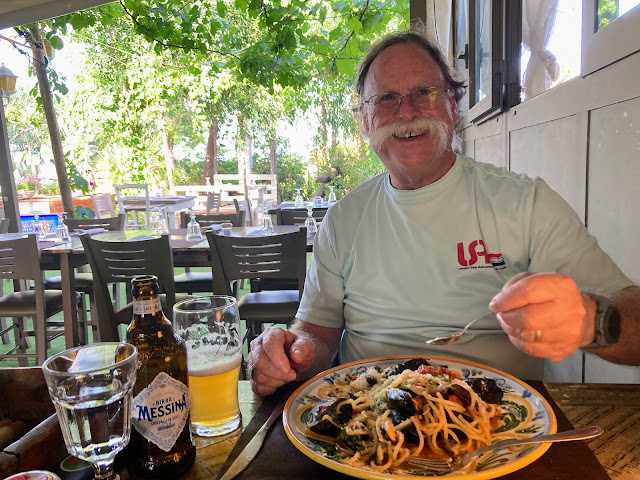 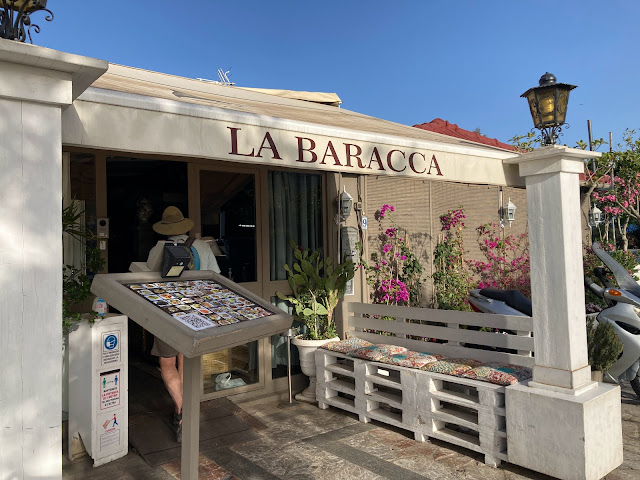 The best laid plans fail, then get better.  We get to our Hotel Villa Michelangelo early in the afternoon. Plenty of time to get settled in then consult with Google on a nearby winery to get a tasting of these Mt Etna wines we heard so much about.
Wow! The reviews of Biondi winery out of this world. Google maps says it's a 15 minute drive and the winery is open from 4-6. It's 3 o'clock now, so that's perfect.  We enjoy the view from our balcony for a bit, then get ready to go. Thankfully the route is all on country roads rather than taking us thru the town's narrow streets with cars parked along the side. In this places, when you see a car coming in the other direction, one of you needs to find a place to pull over while the other passes.  You have the parked cars in one side, a rock wall on the other, and sharp curves so you can't always see if there are cars coming.  It's nerve wracking, and I wasn't even driving!
Any way, the country roads are nicer. In some places they were even as wide as in the US. There were very few cars in the road and Google maps was doing a good job at navigating. We could enjoy the scenery.
We made the last turn down a much narrower road and found the driveway to the Biondi winery.  It had a gate closed across the driveway and a padlock in the gate.
OK, on to plan B. The Nicosia winery was just a little further according to Google maps so let's go there. Woh, talk about a narrow road! We made it and see a big sign on the buildings rock wall for Nicosia winery but no one is home.  I'm afraid the driveway doesn't have enough room to even turn around, but Jim says he can do it. 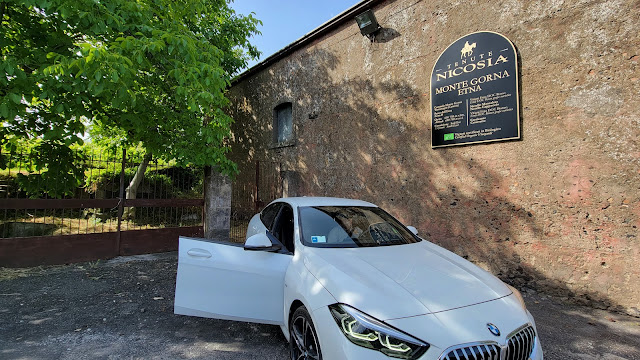 I get out of the car to watch and guide him (and take pictures!) He executed a perfect 3 point (or maybe 5) turn and we're on our way back, there is no plan C. We tried. We saw some of the Etna vineyards, we can get wine back at the hotel. OK Google take us back to the hotel.
Wait - what was that?
I saw a rock wall marking the entrance to something inviting and I think the sign said Nicosia. Isn't that the name of the winery where we just turned around? Jim says yeah, and I think I remember that as the name of the winery I saw when I first researched for the hotel.  We happened to be in the widest part of the road that we had seen all day and there was a gas station on the left so Jim made the split second decision to turn around and go back to that driveway. Sure enough, it said cantine Nicosia. Not sure what cantine means but it sounds like something good.
Oh yeah😀 🍷
Serendipity is the best. 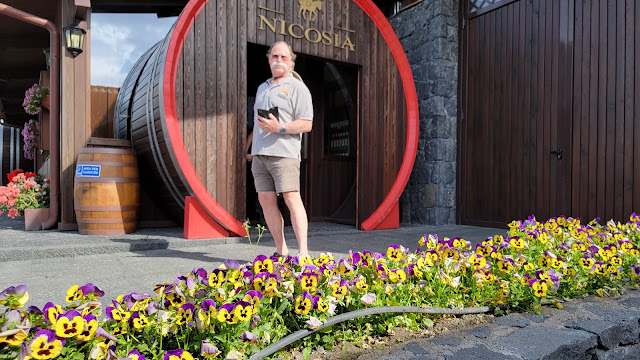 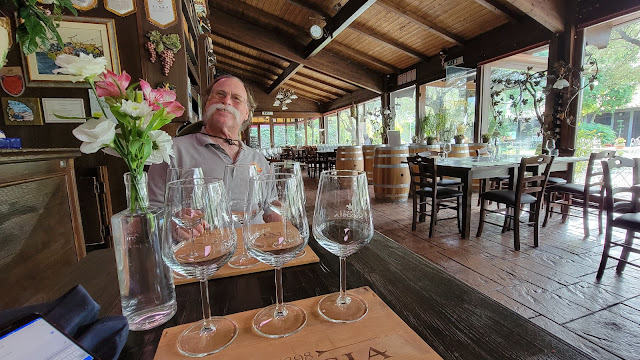 The language barrier - or not, conversations with Gregorio

Do you know what you call someone who only speaks one language?

We are SOO lucky that English is as universal as it is. We like to travel. We like to travel all over - not just in the United States or other English-speaking countries. We like to travel to Italy! They don't speak English there, but most anywhere in areas accommodating tourists, you will be able to get by. Add a little Google translate to the mix and you're good to go. But, that's not enough for real conversation.

In Northwest Sicily, by a town called Castellammare del Golfo, we found a B&B called Casale Ginisara. It was perfect. Just 5-10 minutes one way to the Hot Springs, and 5-10 minutes another way to the waterfront restaurants in Castellammare del Golfo. But the best part was the hotel manager, Gregorio. We had a lengthy conversation when we first arrived about visiting the hot springs. You see, there is a natural hot springs as well as a big pool and resort that uses the hot water. He thought we would enjoy the natural springs more, and told us all about it. We ended up taking the easy way and going to the resort. But, the point was that we could have real, complete conversations with Gregorio because he spoke such good English. He was born and bred Sicilian, but he worked in hotels for quite a while in London. His English was excellent and we took advantage. At breakfast the next morning, we talked about life in Italy compared to life in the US, politics, education, medical care, nothing was off limits. It made me realize how much the language barrier does affect us. I know that many of the people we've encountered in Italy were equally as friendly as Gregorio, but since we only speak English, it limited our conversations.

Conversations with Gregorio were such a treat! He also used an Android phone and was interested and receptive about information we had to share! We weren't just old American tourists, and he wasn't just the hotel manager, we were all interesting people with lots of knowledge and opinions to share. It was so fun! 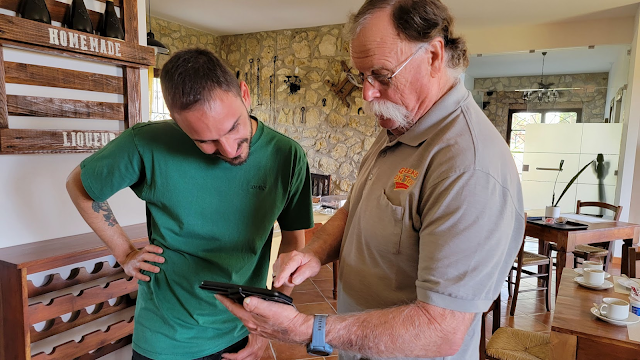 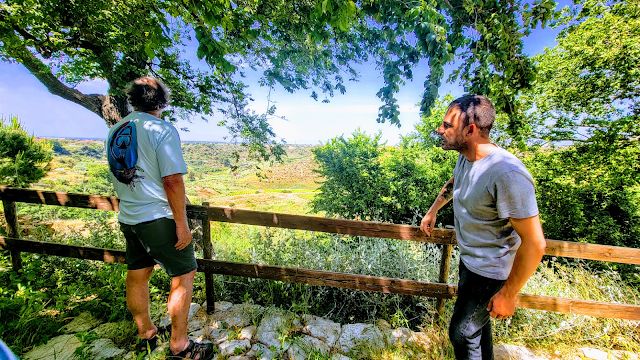 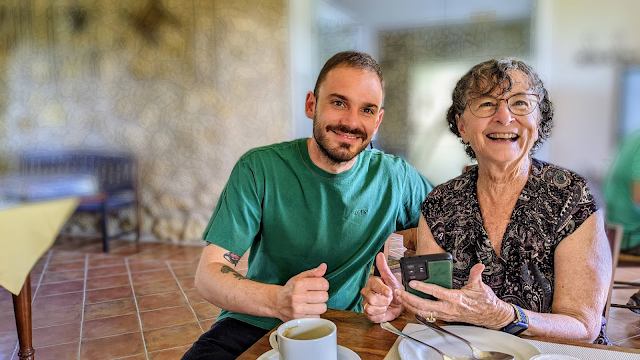 Location, comfort, conversation ... Casale Ginisara checked all the boxes. I would love to go back and spend more time.
Posted by Chris Guld at 6/01/2022 No comments: