We learned of Heath and Alyssa years ago from our friends Chris and Cherie. We followed their website and were particularly interested in their New Zealand travels. We followed their lead and rented an RV for our New Zealand adventure. We continued to follow Heath and Alyssa's blog as their life changed. They had a baby and started to look to settle down. Ever the entrepreneur, they decided to buy property for an RV park. They settled on a home and property in Montrose Colorado.
But we're not talking just any RV Park. Heath and Alyssa are RV Entrepreneurs, and they have built a community of like-minded RVers. They produce an annual RV Entrepreneur Summit where experienced folks talk and wannabes listen. They wanted an RV park where their community would be happy to stay and work. An RV park, a community, a co-working space. A new place for a new kind of entrepreneur.
We were intrigued.
We made arrangements to stay a couple of nights at their "Schoolhouse with a view" They made it clear that it really was not an RV Park yet. No hookups, no roads. But they did have boondocking parking areas and they did have the schoolhouse, a communal area with showers, kitchen, a gathering area for all the guests, and high speed Internet - fiber optic 300 mbps.
We have a strong feeling that anything Heath and Alyssa set their minds to will be a success, and we wanted to see it.
We made our reservations using a booking system called hipcamp.com.
We were coming in from the north after visiting the Colorado National Monument, so we stopped in town for a late lunch/early dinner. We found Horsefly Brewing Co. in Montrose that was quite accomodating. Beer and fish tacos - yum
Their campground is right on the main road (550) south of town, there is no sign so we had to pay close attention to the Google Map directions to the lat/lon position. Once we turned in we were in a large gravel parking lot with a line of trees at the back. That was the designated parking.

I hope we get to come back in a couple of years and see how it turned out!
Posted by Chris Guld at 7/29/2021 No comments:

When the Escapade was over we found ourselves in a situation we haven't seen since our very first year of living in the road. There is nothing on our calendar until October in Florida. We could go in any direction our hearts desired, and take as long as we want.
After meeting up with Kim and Don, we were in Utah and just too close not to visit our friends in Park City.

After we left Tom and Margo's we had some research to do. Were we going to go south? Monument valley is still on our list. Or do we go straight east and go across rocky mountain national park? Or can we go a little bit south and visit the brand new RV Park owned by Heath and Alyssa, then turn northeast? Once we're headed east, are we going to go all the way to the jersey shore before heading south, or turn at Missouri or Kentucky? We wanted to visit a friend in Minnesota, but that's awfully far north. We came up, roughly with 3 different routes to get from Utah to Fort Lauderdale, FL.
The first decision point was in a little town called Duchesne, Utah (the blue star above). Going straight thru on highway 40 would lead to Rocky Mountain National park. Taking a right on highway 191 would take us to Heath and Alyssa. I decided to stop for the night in Duchesne!
Yes, I was driving myself crazy, but I was also having fun. I love using Roadtrippers.com to play with different routes and see what's out there. It makes it oh so easy to "play what if." What if we go to monument valley, then east to Florida? What's the difference in miles if we go to rocky mountain national park, then east to new Jersey, then south to Florida?
Roadtrippers allowed me to plot each possibility, then turn them off or on to answer my what if questions. It makes it so easy. And it shows me cool things along reach route that I wouldn't know about otherwise. Like a hot springs on the west side of rocky mountain national park. We love hot springs!
Armed with all the answers to the multitude of what if questions, Jim and I poured ourselves a glass of wine (or 2) and talked it over.
I said, it appears to boil down to seeing people, or seeing places. Jim said, unless there are other factors involved, I choose people! Ha! Decision made, we turned south-east at Duchesne in order to stay at Heath and Alyssa's property.

Along the way was a national park that Don and Kim highly recommended we visit: Colorado National Monument. Wow. 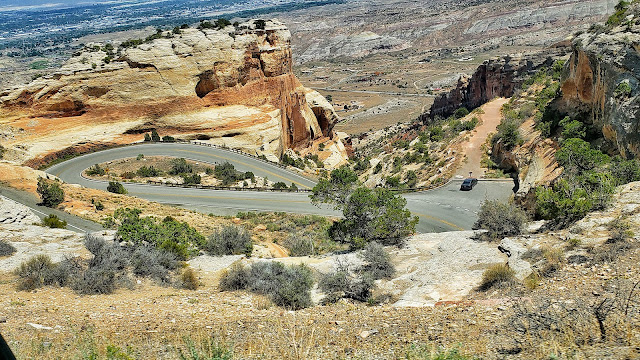 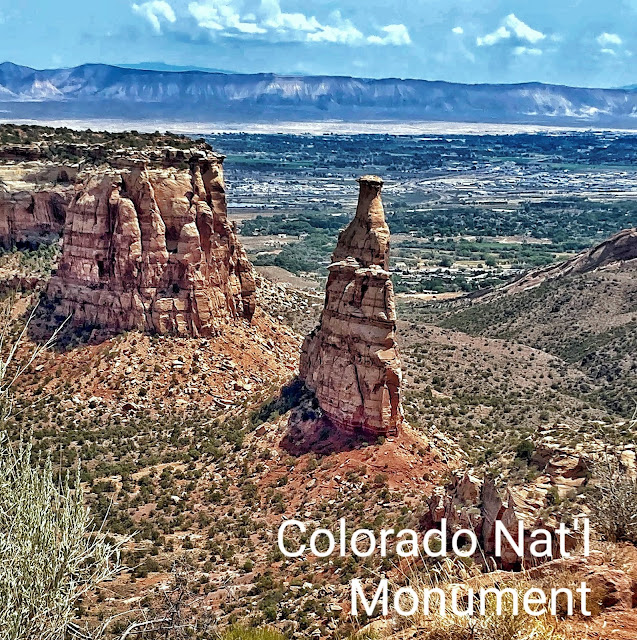 And, we found a crazy place to stay the night - a Harvest Host location called Buzzard's Belly. It's located in an old ghost town called Cisco. One of Cisco's claims to fame is that the movie "Thelma and Louise" filmed some scenes there. So, we found Thelma and Louise on Amazon Prime Video and watched it. Yep, we recognized a few shots. This is one of our favorite things to do as we travel - watch movies filmed in the location. 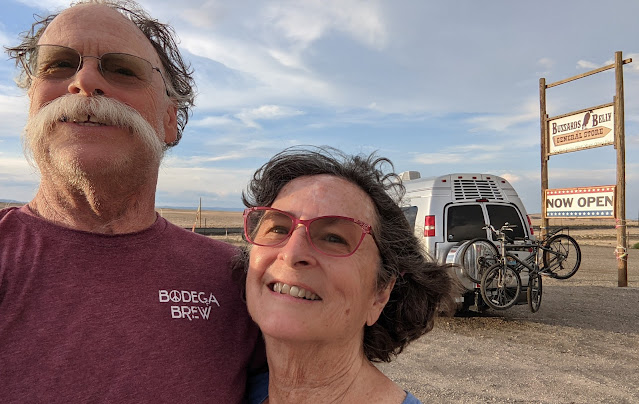 Wild camping with Don and Kim

We first met Don and Kim at an FMCA rally in Gillette, Wyoming in 2013. We were there doing our Geeks on Tour seminars and they were there promoting their company, Harvest Hosts. (they have since sold Harvest Hosts and are now retired.) We hit it off right away and were fascinated to hear their stories of RVing in Europe, Africa, South America, Australia and more. I don't think we've ever met anyone as well traveled as they are. Don would tell how he would just use Google Earth and look at the satellite views of the local landscape when they were RVing in Turkey. When he saw a likely place to park, that's where they would go. What amazing experiences they've had. When they heard we were going to Croatia in 2017, they said we had to visit Plitvice - we did, and how right they were! Whenever possible, we'll follow their advice.

Don even wrote a book: Americas Overland. The term "overland" is used to indicate driving adventures off the beaten path. They are way more adventurous than us! We've visited them at their home in Arizona and they've visited us in Florida, but we've always wanted to see them in their 'natural habitat' of boondocking somewhere. Our opportunity finally came this summer after the Escapade in Rock Springs, WY. Don and Kim planned a few weeks in their RV heading north from Arizona, and the goal was to meet up with us somewhere south of Rock Springs. That spot turned out to be in the Flaming Gorge area. They sent us the coordinates on Google Maps and we followed the directions from our Google Maps. True to form, they were not parked in any campground, just on a dead-end forest road with a gorgeous view. It was thrilling to follow the directions and find their truck camper RV parked at the end of the road. 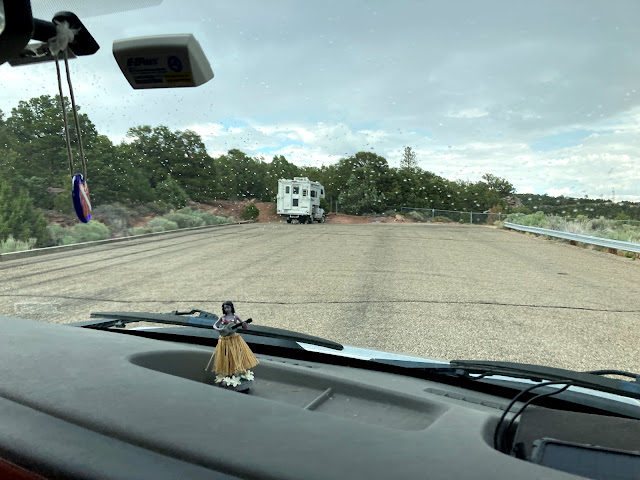 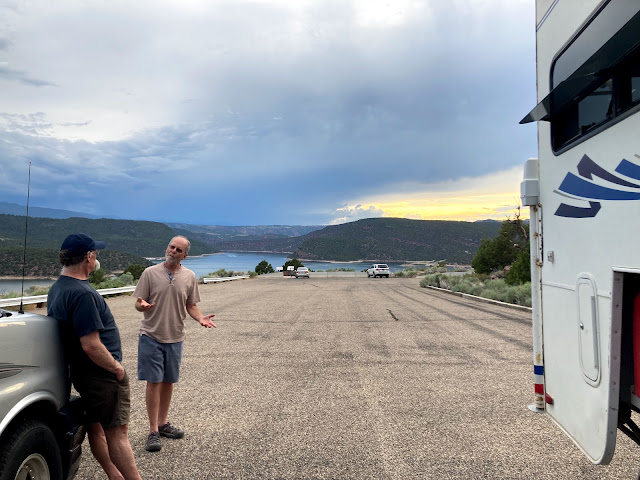 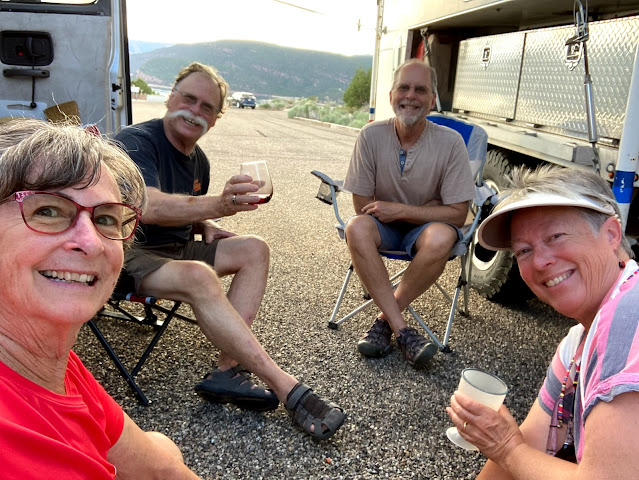 After a delightful happy hour, dinner, and generally catching up, we determined that they would lead and we would follow the next few days! Oh boy!

We made one standard stop at the visitor's center, then they took of on a side road - a loop - through the 'geologic area.' 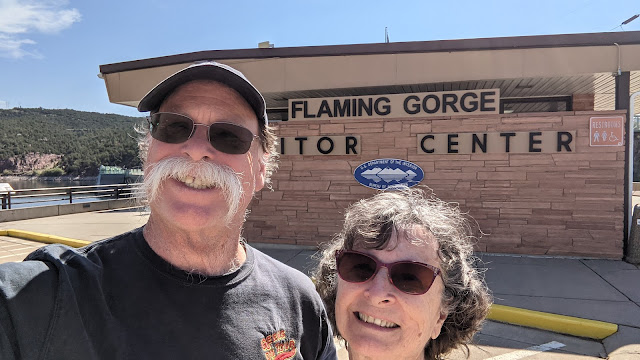 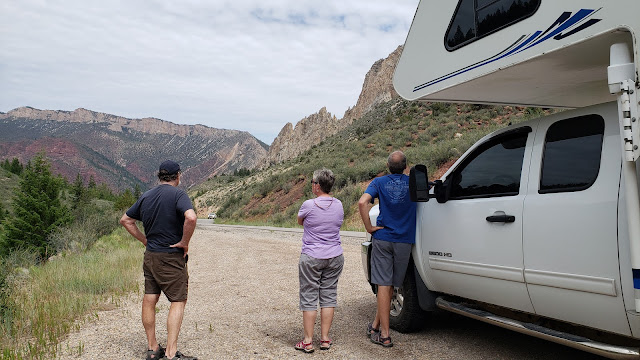 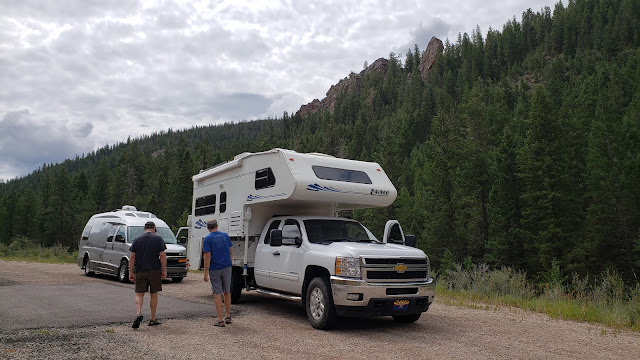 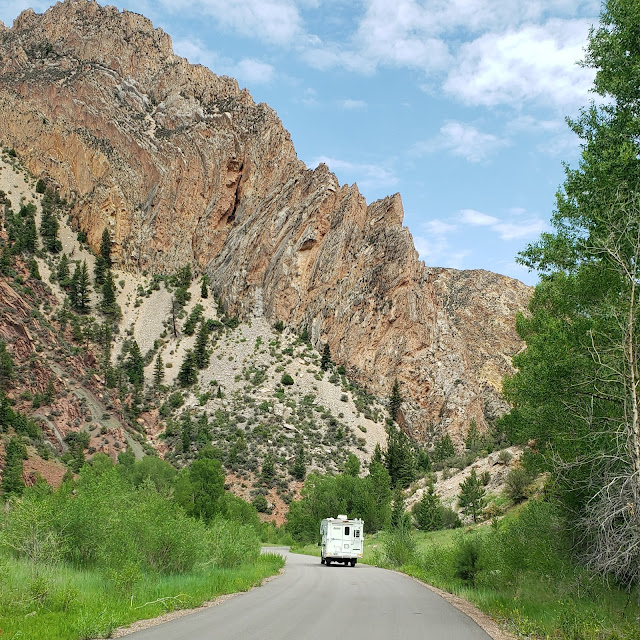 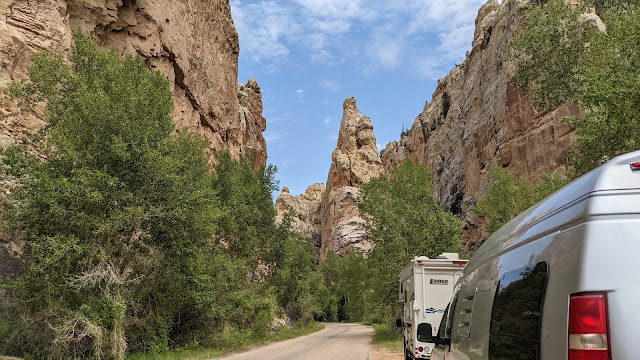 After that beautiful side trip, we went back up to highway 80 and west to Evanston where we took a smaller road headed south thru the Uintah-Wasatch Forest and some pretty high mountains.

There, Don had researched on Google Earth, and iOverlander and maps.me I believe, to find a "dispersed camping" parking spot just off the road. When we first pulled in there were already a few campers already there, but after a while the one by the river left - giving us one of the best campspots ever!

Here is an aerial photo that Don took with his drone. I love how this perspective gives you the true picture of where we are! And, his drone is just so tiny. Jim's is large enough that he doesn't even bother to bring it with us. I told him that he needed to buy one of these little guys (DJI mini2) so we can take photos like this! 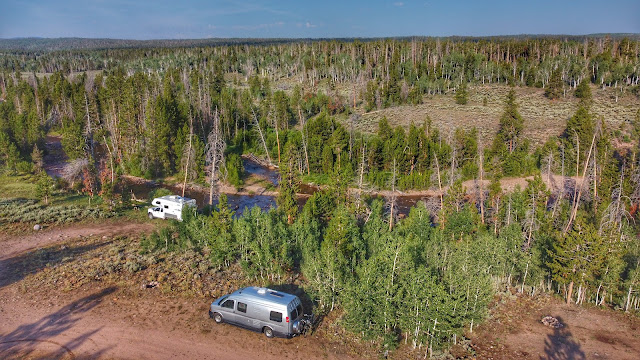 Don and Kim even got us on a hike! We used to hike a lot, but it's been years. 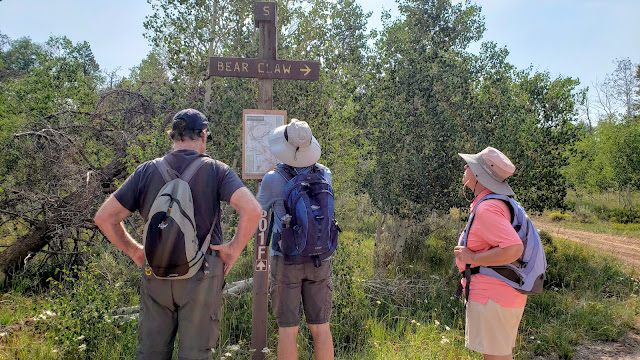 Loved it! Thanks Don and Kim. Can't wait to do it again.

We're here at another Escapade.

Glad to be here!

In between the FMCA and the Escapade, we had a few nights to play. We found a Harvest Host location that was unique. It wasn't just a parking place outside a business - it was a parking place along the old Oregon trail AND a covered wagon ride down to the river where a steak dinner was cooked in Dutch Ovens. This was a highlight of our time in Wyoming. 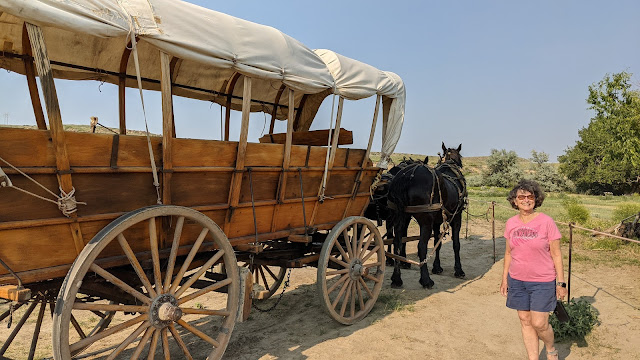 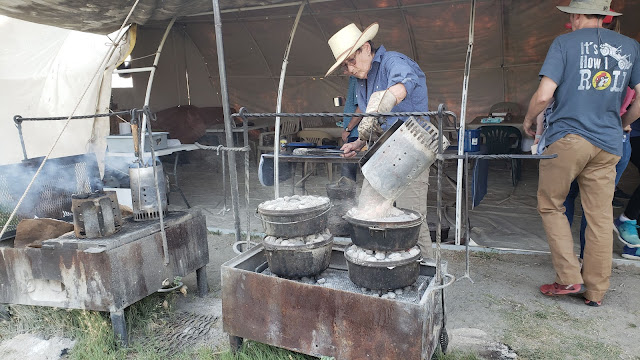 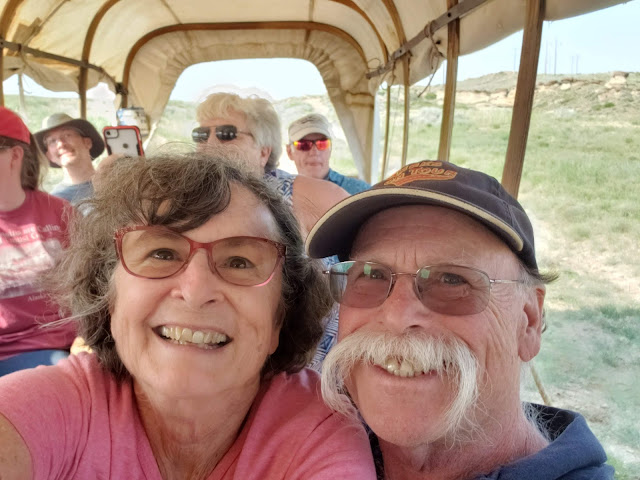 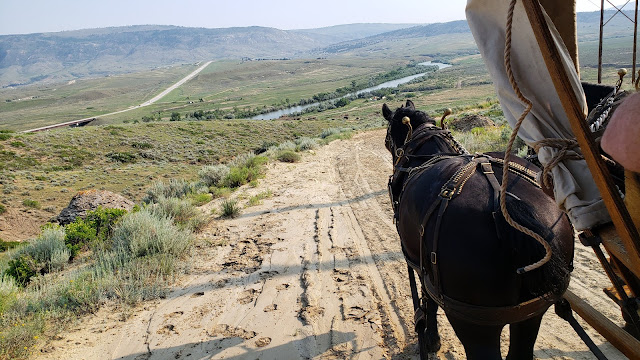 Another night we decided it was worth going just a bit out of our way to go to a hot springs we have visited before and stay at the RV park where we also stayed before. Saratoga Hot Springs and Deer Valley RV Park. 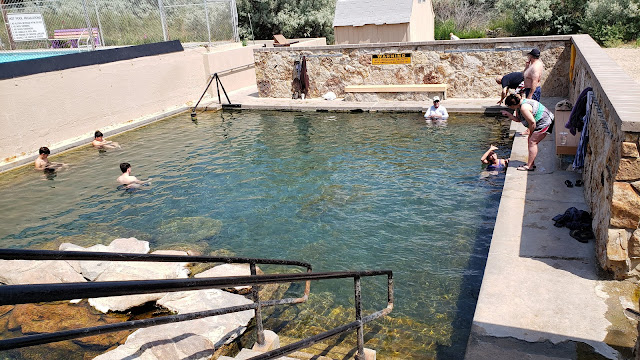 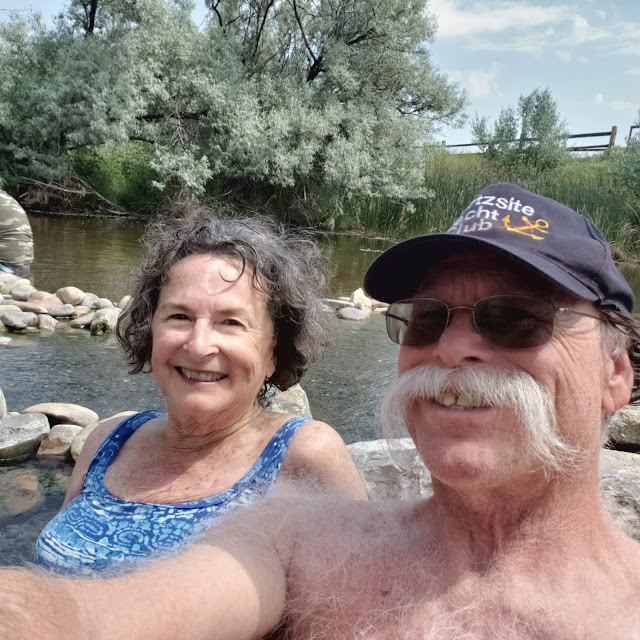 Hot Springs conversations - we met some nice young men who were hiking the CDT - Continental Divide Trail. We learned that they have a podcast - it's fun to listen: Camp Walk-Along podcast.
Posted by Chris Guld at 7/15/2021 No comments:

Patting ourselves on the back

We were finished with the FMCA rally in Gillette on Saturday, then we did Episode 216 "What Does This Button Do?" show on Sunday. Our topic was a recap of the rally, we gave just a little taste of each of the 4 seminars we presented:

I wish I could bottle the feeling that we get at these rallies! The closest I can come is this video of the applause at the end of a seminar.

In between seminars, people would visit us at our table. Many had questions about their smartphones. Between Jim and me, I think we had a 100% success rate with solving their issue or answering their question. Things like,
It is SO much easier to answer people's questions when you're standing side by side and you can actually work with their phone. Usually, we're answering questions on our user Q&A forum where we have to depend on their written question and our written response.
I also really enjoy the IRL (in real life) interaction because I get to learn things. For example, we teach how to use the iPhone's camera with the Portrait setting. I have been distressed by the fact that, with my iPhone SE, Portrait is only available for faces. I like to use it for flowers and other close up photos. By working with people with other phones, I learned that the limitation is only on the SE. Good to know!
Lots of people come by just to say "Thank You", and "your seminars are great!" I wish we could have recorded some of these, but we just couldn't do it. 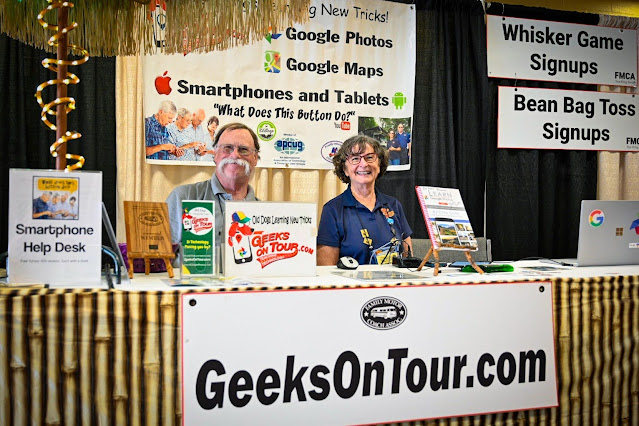 Our second FMCA rally this year. 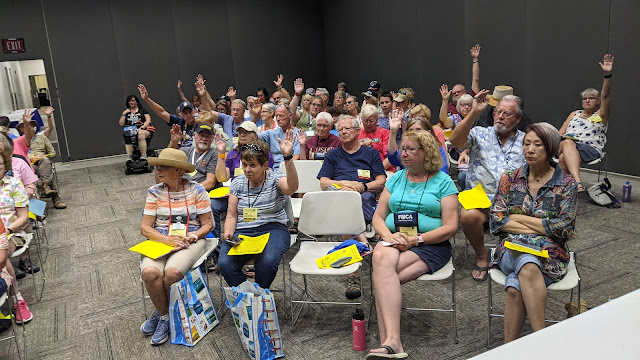 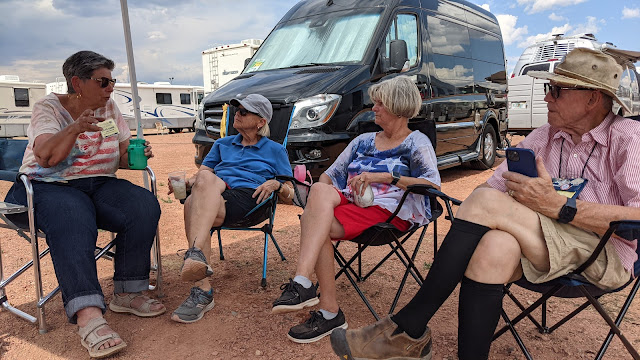 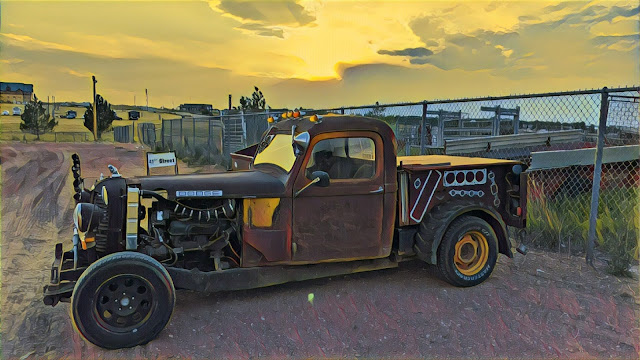 Here is a link to the shared photo album.