Ahhhhhhh .... after a very busy week, we are relaxing on a quiet, drizzly Saturday. So nice to have the luxury to just stay at home and read email ... browse the Internet, visit other people's blogs, read RV newsletters. How can any family survive with only one computer?!?!

Email ThisBlogThis!Share to TwitterShare to FacebookShare to Pinterest
Last week we spent a few days at another local campground - Markham Park. We want to get some experience with a variety of parks in the area - but it's hard to get reservations anywhere this time of year. Markham Park said they could get us in for 3 days in the middle of a week if we did not need sewer hookups, so we took it. It's a great place - real woodsy - but the trees prevented our Satellite Dish from connecting to the Satellite, so we were out of communication for a few days. I tried to think of it as a little break from email and web work, but, I couldn't enjoy it. It was too frustrating to get calls from clients and not be able to log on and help them. I'm glad to be back at 'Donna's Backyard RV Park' and be connected to the Internet again. And, she's happy to be sharing our high-speed connection! Here is a photo of our site at Markham Park.

We bought a new car! Well, a new car for us anyway. Actually, it's 4 years old - a Honda CRV 4 wheel drive. We got it from CarMax and traded in my Ford Taurus. We can't tow either the Taurus or Jim's van behind the RV. It takes a special transmission to allow the wheels to be moving without the engine running. We kept referring to the 'Dinghy Towing Guide' to see which vehicles are capable of being towed. A car that is towed behind a motorhome is called a 'Dinghy'. Even though some cars are on the list as being 'towable' with all 4 wheels down - they still had some restrictions. Like, don't tow it over 55 miles/hr. While we certainly don't plan to race our RV, we do usually drive it about 60mph, so we didn't like that limitation. The best option seemed to be the Honda CRV - no limitations, not too heavy, not too big, yet big enough to put a rack on top and carry 2 kayaks. So, we found one, and bought it! Here it is - isn't it cute?!: 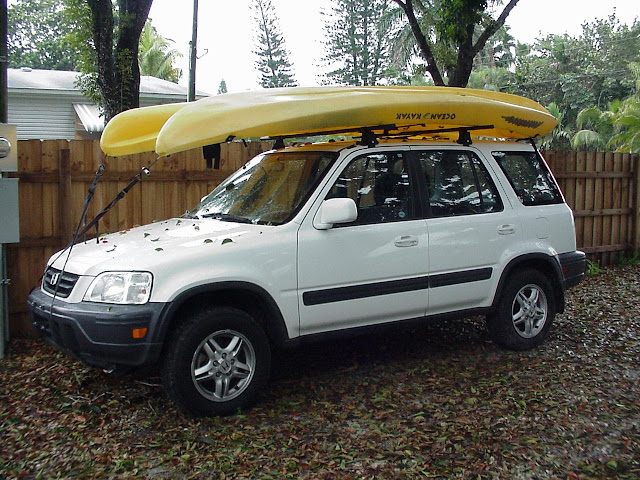 If we put a blue stripe down the sides - it will be a 'mini-me' of the motorhome! This morning, Jim cooked our breakfast outside. We ran out of propane in the motorhome's propane tank, so our stove doesn't work at the moment! Before packing up to go out to breakfast, Jim suggested we use our portable butane burner. You see, back in 1999, when we thought the world was going to end when the clock ticked past midnight on December 31st, we stocked up on a few emergency supplies! This little burner was a find of my Mom's and it's one of the best purchases we made. Of course, we didn't need it for the end of the world, but it has come in VERY handy in our new world! Jim likes cooking outside ... he says it's a 'guy thing.' . 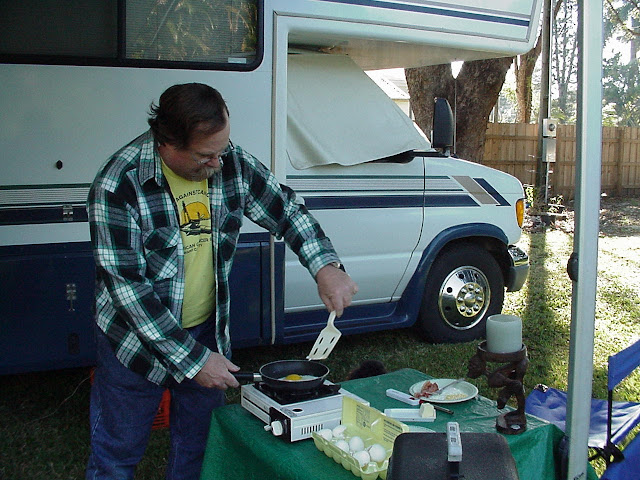 We are nicely settled in Donna's backyard now and it is a stunningly beautiful day! We're leaving the door open and Odie can come and go as he pleases. Here are a couple photos:

Odie visited the groomer the other day and got the shortest cut yet. Take a look, I'm not at all sure it's the same dog! We're probably giving him a complex laughing at his skinny legs.

Email ThisBlogThis!Share to TwitterShare to FacebookShare to Pinterest
We are in a new place for a few days. Donna has a huge tree over her driveway. I had to back nearly to her back fence to give the dish a shot at the satellite. After we finally locked on to the satellite, I couldn't get the Wireless in the router to work. Turns out, the unit went bad. I replaced it with another router and reconfigured. Somewhere in all this, the dish software wanted to recalibrate the dish. Now, all is well. When Donna gets home, I'll set her up with a wireless adapter. I learn more about this stuff all the time.
Posted by Jim Guld, Mr. Geek at 1/23/2004 No comments:

The adventure continues! We left Paradise Island today and will be spending the next few nights in the driveway of our friend, Donna. Click on the link below to watch a short video. Leaving Paradise.MPG
Posted by Chris Guld at 1/22/2004 No comments:

Leaving an RV park where you've been for a few months is kinda like leaving your job or neighborhood where you've been living/working for years. People want to say goodbye and hold a party! Cliff and Marie have happy hour outside their motorhome most every evening, but made a special point to have one for me and Jim before we left. I didn't take any pictures but you can see all sorts of photos of Cliff and Marie by taking a look at their website. We learn so much from talking to others who have been full-time RVing so much longer than us. I look forward to being the old-timer and giving other people advice! We just came back from Stan and Lauralee's. They invited us to their 5th wheel for a 'nightcap'. It's amazing what they put into these RVs! I've never seen one like theirs. They have 3 slideouts - one for the bedroom and one on either side of the main living area. Because the main living area is so big, it had an 'island' in the middle. So, lots of counter top! And overhead cupboards too. Here's a photo of Stan and Lauralee in their RV:

And look at the pantry they have!

We signed their 'guest book' while we were there. What a great idea! A way to keep track of all the great people you meet along the way.
Posted by Chris Guld at 1/21/2004 No comments:

We're getting ready to leave Paradise Island RV Park now. We've been here since July 2003. It's been a great experience to see what it's like to be settled in at a park, but it's time to get moving! This park is completely full now. The snowbirds come down from Canada every year. There are people here who know each other from many seasons of returning to this park. There is actually a 'No Vacancy' sign at the entrance! And, there are 232 sites here. Here's a photo taken from the roof of the office building:

Here is our site at Paradise Island:

Our foray into Wireless Internet for RV Parks was serendipitous here. It's the first RV park we approached with the question, "Are you interested in Wireless Internet?" They immediately said, Yes! Can you do it now? We moved in last July and Jim set up their office network and put a Wireless Access Point on their DSL connection. Everything worked great. All computers in the office now had Internet access, and 4 workstations were set up in the 'Guest Services' where people could plug in to ethernet, or they could sit anywhere in the room and use wireless. The wireless signal extended to the sites all around the office. We were in one of those sites, and it worked great for us. Jim's plan was to use inexpensive 'powerline' technology to extend the signal to other areas of the park. But, it didn't work :-( Powerline means using the electrical lines as your network cable. Jim could get it to work down one row of RVs north and south, but he couldn't find any electrical circuits that went east/west. Meanwhile, the managers of the park were at an RV show and met the folks from Coach Connect who said they had experience getting the signal to all corners of a park their size and they'd put it all in for free! Well, how can you beat that? So, we got to learn from Coach Connect. They installed mega antennas, 2 of them. Here's a photo of one:

And, it works great! It really does reach 90% of all the sites in the park, even tho there are lots of trees. We were very impressed. Jim got to know the folks at Coach Connect and started handling some of their more difficult tech support calls. Then they asked us to visit another park in Florida that uses their services and help them out. Now, we're ready to go on the road and visit lots of RV parks. And, I expect, our primary focus will be selling Coach Connect. Just shows what can happen when you go with the flow! Since we will be leaving here soon, we wanted to impart as much knowledge as possible so they can keep their connections working. We put together a little seminar called Troubleshooting Wi-Fi. Jim presented it last night to an appreciative group of about 15 folks. Here's a photo:

On New Year's Day, we were parked at Easterlin County Park . I've been going to Easterlin Park since 1968. I was in high school then and we lived just a few blocks away on 38th street. 25 years later, after living in Canada, Berkely and several places in between, I ended up living on 33d street - just a little further away from Easterlin Park! It was my favorite place to take Odie for a walk - a beautiful park with a wild nature path. I always wanted to camp there, but never did. SO - in order to have an 'open-house' party on New Years, we parked the RV there for a couple nights.

We wanted to show off 'Oh-Boy' in the best light, so we spent the afternoon cleaning and polishing. At midnight on New Year's eve, we climbed up on the roof - admired our blue-light satellite dish and contemplated our exciting life ahead. On New Years Day, several friends came to visit and we had a wonderful day!

Happy New Year! In our coach in Easterlin Park. It has been an exciting year. But nothing like the year to come.
Posted by Jim Guld, Mr. Geek at 1/01/2004 No comments: