Getting our covid vaccines

We're in line at the parking lot of the Hard Rock stadium. I figure that someone from Disney world must have helped design this operation. One giant, empty parking lot is used. They set up big drive-thru tents where the shots are administered. Then lines of cars snake around the parking lot until they reach a tent. It's like the tent is a ride at Disney. The lanes to drive are designated by hundreds of orange traffic cones. It takes several hours to snake from the parking lot entrance to a tent. 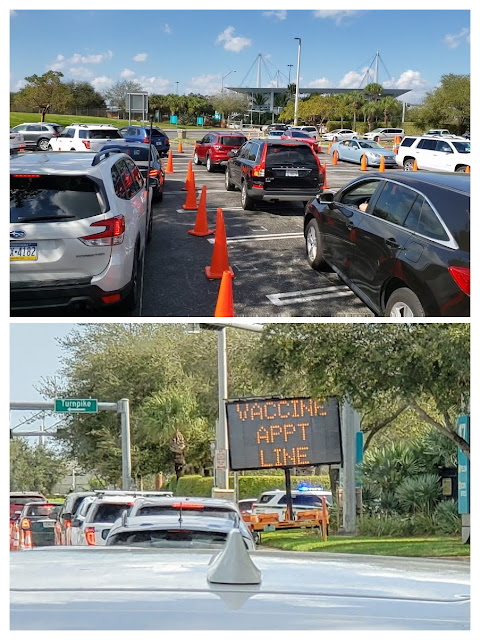 We came here for our first shot 3 weeks ago. For several weeks before that we had been checking the website and calling every number we heard about in an attempt to snag an appointment. What finally did the trick was a viewer of our YouTube show. During the show we always spend a couple minutes saying what we are up to and we mentioned our failed attempts to get an appointment. A woman who was watching sent us an email with a new phone number that had worked for her. I immediately dialed the number, a person answered and gave us an appointment in 4 days time! We were thrilled and so thankful for the kindness of strangers.
We were in line about 3.5 hours on that first visit, but we drove the van so we had our own bathroom as well as some snacks. We got our shots and felt downright giddy we were so happy to believe there was a light at the end of the tunnel of this pandemic. 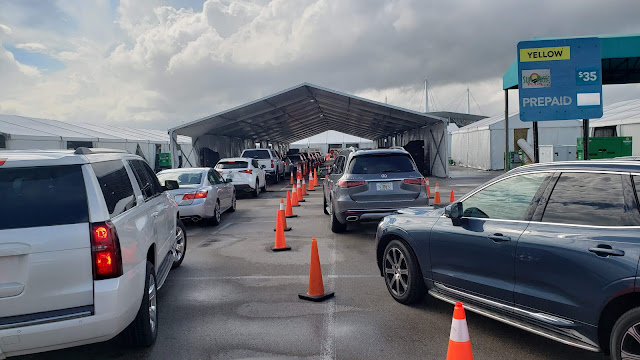