Travel Thru Ohio and Pennsylvania

After our Geek Week in the Quad Cities the next thing on our agenda was to get to the Jersey Shore to visit friends, but we didn't need to be there for a couple weeks. When we have no specific place to be, we look for Thousand Trails parks anywhere near our route. Since we pay for a yearly membership, it means that our stay is 'free.' And we love the woodsy locations. 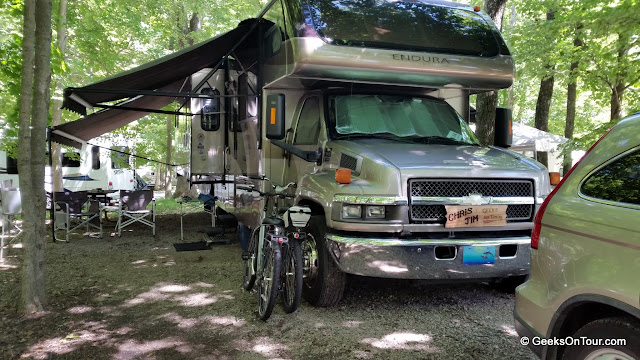 Oh ... and the hot tubs! Most Thousand Trails parks have hot tubs and we love hot tubs!! 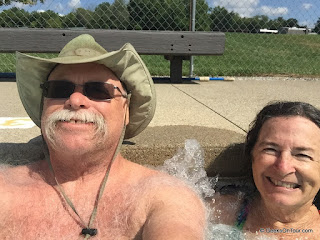 So we looked at the Thousand Trails map and decided to go to the Wilmington, OH park for a few days, then the Hershey, Pennsylvania park for a few days. And, I'm so glad we did! In addition to a soak every night at Wilmington, we met some new friends! Another blogger - J.D. Roth and his significant other Kim. 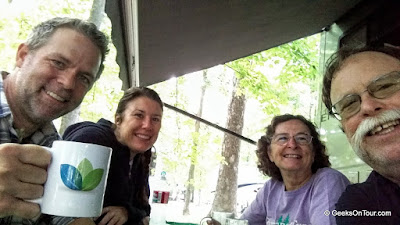 We look forward to meeting up with them again somewhere because we had LOTS to talk about, and only breakfast to do it. We also went to a place we'd heard about ... Jungle Jim's ... just outside of Cincinatti. WoW. Think of Trader Joe's and World Market together, then multiply times 10. It was fun.  And, Jim even found a Tobasco sauce belt-holster like Phil had - he had to get it!

Next stop Hershey Thousand Trails. TT are known for being in places with poor cell service and Internet connections. We were planning to be there on Sunday, so needed good Internet to do our "What Does This Button Do?" show. We drove around, checking the Verizon speed on our phones at ever empty site and were getting pretty discouraged ... speeds of 2Gb/s are minimum for us and we were getting less than 1. Then we drove by site F-5 and, lo and behold, we showed speeds of 4-5!! Whew! I really didn't want to go somewhere else. Here's the show we did there: Episode 48: Cleaning up your Contacts 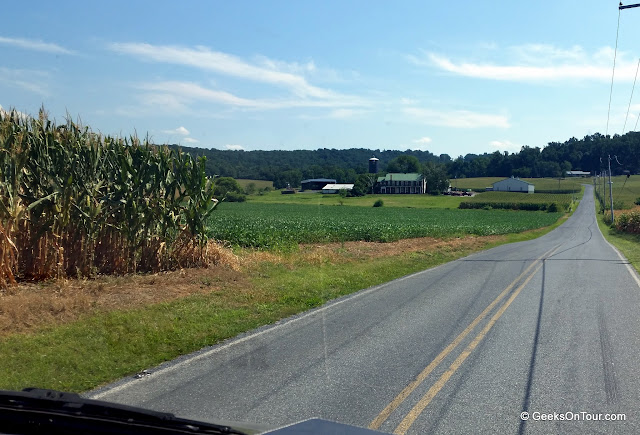 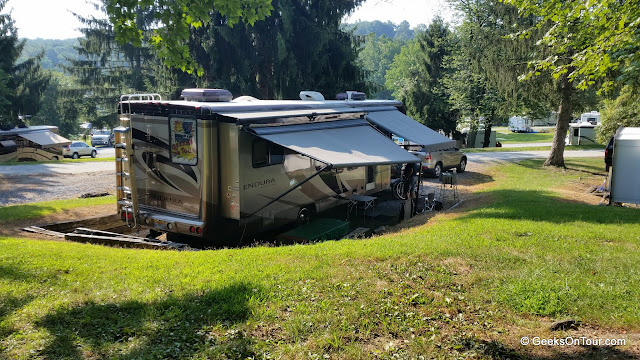 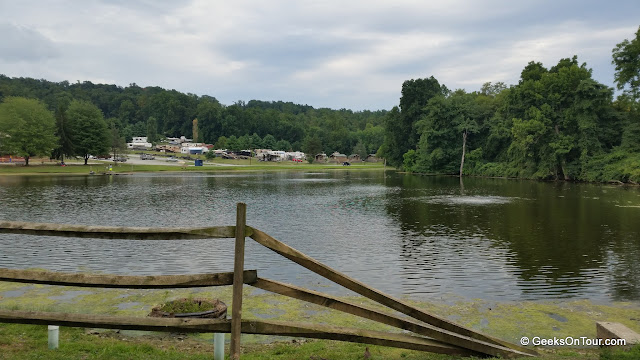 When we left there, it was an easy drive to LBI at the Jersey Shore, where we plan to stay a few weeks!  Here's a little 1 minute video of traveling from Illinois to New Jersey.

Watch our Weekly Online Show on Learning Smartphones and Tablets!
What Does This Button Do?
Posted by Chris Guld at 8/17/2015 2 comments:

Next stop was a planned "Geek Week" for the Quad Cities Computer Society in Moline, Illinois. This is our 4th time presenting for this group. Good Stuff. We usually stay at a Corps of Engineers park called Fisherman's Corner, right on the Mississippi River. We actually used it as an example in our Google Maps class in Madison. Someone came up to us after the class and said, "I know that park, we've stayed there before. But, last time we stayed just a little downstream at a County Park called Illiniwek, and it was even better.

So, guess where we stayed? Illiniwek! It has even more river frontage than Fisherman's Corner. Here's a 1.5 minute video including some aerial video by Jim. https://youtu.be/oTy3EPaNLo0
The sunsets were spectacular watching from across the river. 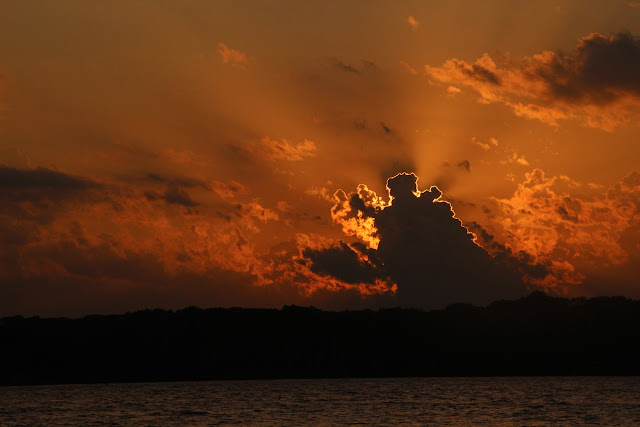 Then we went to work! First, we were the speakers for the general meeting of the club. We showed them all about Google Photos.  Next up - we presented the same seminar for a different group. We traveled across the River to Betendorf, Iowa and the Center for Active Seniors. We've also been here 2-3 times before. What a great place it is. 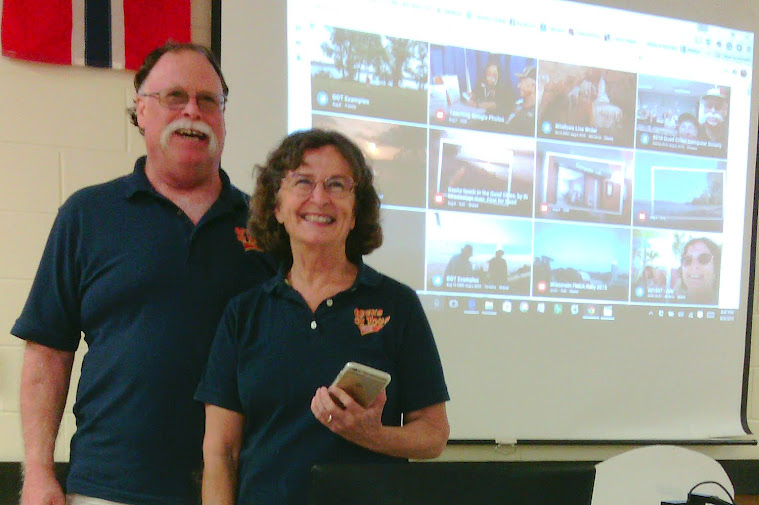 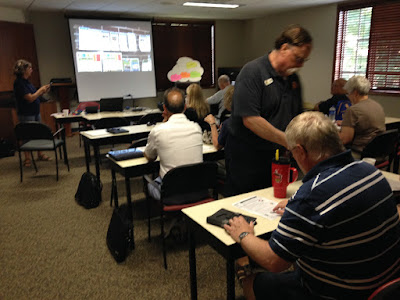 Here's our hands-on class, teaching them how to use the cameras in their smartphones and tablets. This picture was demonstrating the panorama feature. Look closely ... see anything unusual about this picture?

The last night was especially fun. They asked us to attend their special interest group on smartphones and tablets and just be available for open Q&A. We fielded questions from "How do you remember your passwords?" to "What is the device that is projecting your smartphone screen thru the projector?" to "How do I find out what version of Android is on my phone?"

Watch our Weekly Online Show on Learning Smartphones and Tablets!
What Does This Button Do?
Posted by Chris Guld at 8/10/2015 1 comment:

Little movie about the rally, made by Google Photos. (https://youtu.be/3PC-uLRSYt8)


This was a great rally for Geeks on Tour. Packed seminar rooms and a steady flow of people by our table, most of them signing up to become new members, or paying their membership renewal! Don't ask me anything about the rally in general, because we didn't see any of it!

FMCA always treats us very good. We've been presenting technology seminars for them since 2005! They gave us a parking spot at a nearby campground with hookups, so we were far from the madding crowd. We actually prefer to be close to the action, but I gotta admit, this spot was very pleasant. 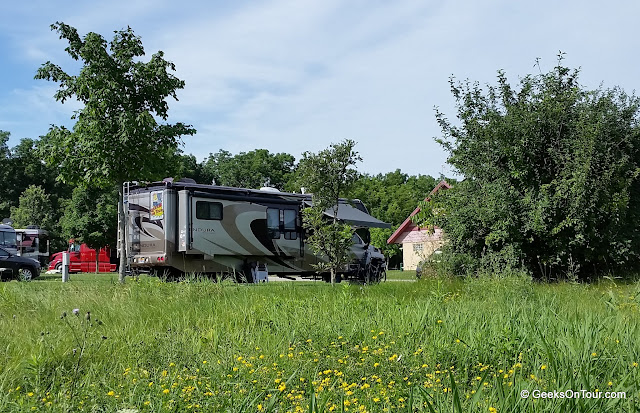 We started with an overview "Technology for Travelers" seminar. I think our biggest crowd was for Google Maps.

And, the smartphone class is probably the most fun these days. We try to remember to take a selfie in that one. 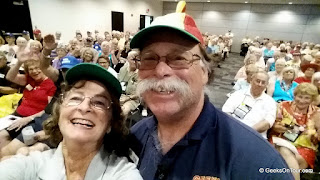 This is a picture of our table, along with the "Geeky Tiki." 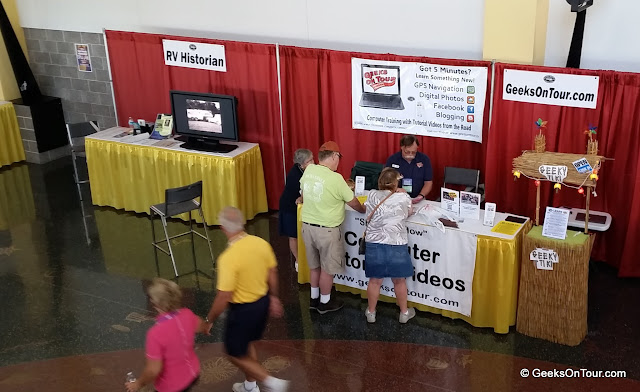 Surprisingly, the Google Photos class did not have a very big audience. About 100 I figured. But it was being Live-Streamed over the web and we were told much later that the viewing audience was 830! Wow!

I think the class I was most pleased with was the hands-on Smartphone Photography. 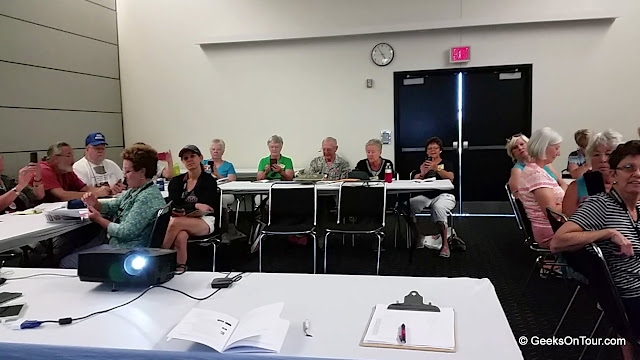 We offered this class twice in FMCA Pomona because I believed we needed to cap it at a maximum of 20 people. So we offered 2 to give enough opportunity for people to come. It's a 3 hour class and we're helping people one-on-one while trying to keep the class on track. It's hard work and we decided we would not do two sessions this time - so we increased the maximum to 30 people. I was nervous. But it worked out fine. We make people buddy-up. Each person gets a workbook, and we explain that the class is kinda like learning to swim by being thrown into the deep end. We have exercises for them to do and they learn by doing. I kept cracking the whip and moving things along, so we got thru (most) all of the material even with 30 people! And lots of people came up to us afterward saying that was one of the best classes they'd ever taken! They learned SO much that they didn't know they could do with their phones. AND they had fun.
For Geeks Who Teach, it just doesn't get any better than that!

All in all, the rally went so well that I find myself wondering, "Where do we go from here?" Can we just keep doing this same stuff for a while? Or have we run our course?  ???

Watch our Weekly Online Show on Learning Smartphones and Tablets!
What Does This Button Do?
Posted by Chris Guld at 8/03/2015 No comments: