Mom and I went to Morikami gardens – a park in Delray Beach, Florida.  It is just the best place to go to find some peace amidst beauty.  Mom introduced me to this place many years ago, and we have been there several times since.  This time she said, “Have I been here before?”
She loved it.  So did I.  I made a little video with all the pictures I took:

‘Thanksgiving at Mom’s’ sounds pretty normal doesn’t it?  But not for me.
Mom has never cooked Thanksgiving dinner.  When she was married, my Dad was quite the cook, and we had many a turkey stuffed with chestnut dressing, but they split up in 1988.  She has lived alone ever since and heating something up in the microwave was the extent of her ‘cooking.’
Lately I’ve noticed that she doesn’t seem to know how to operate the microwave.  That’s what Alzheimer’s does to you.
My job this month was to get her moved into Willow Wood.  This was planned last year … discussed even the year before … but it’s not something she wanted to do.  I’ve always been a very good daughter, doing whatever she told me to do.  The hardest thing I’ve ever had to do is to tell her what to do!  I’ve been a bit of an emotional basket case lately … you may have noticed my lack of posts.
She is living in her new apartment now.  And, thanks to Jim and Jo Ellen, her furniture is there (moved while I took Mom to the Keys) and decorations look marvelous!  Really, it is a beautiful, comfortable, apartment.  And, she gets 3 meals/day in the dining room.  So, Jim, Jim’s Dad, and I went to Mom’s place for a delicious Thanksgiving Dinner.
Will wonders never cease!  Thanksgiving at Mom’s.  And nobody had to clean up!
Posted by Chris Guld at 11/26/2010 4 comments:

When Jim and I stayed at Thousand Trails Peace River for the 2006-7 season, we became friends with the manager there – Debbie.  She later moved to the Florida Keys and is living on her boat – Betelgeuse.  We’ve been meaning to visit her ever since, and I finally did!  Jim had work to do, but Mom and I had a great visit.
Debbie works at the Marathon Marina and there’s a restaurant on the property – here’s a picture of Debbie, Mom and me at the Lazy Days. 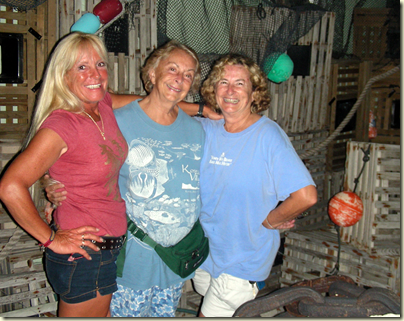 We stayed on her boat 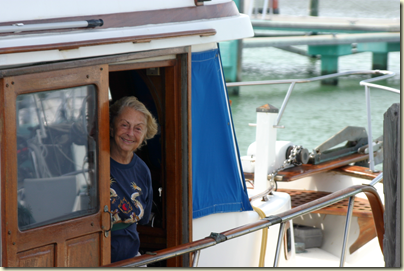 The sunsets were a sight to behold 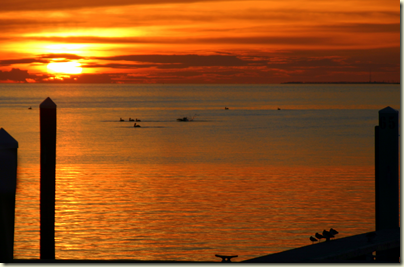 Debbie even took us out snorkeling at Sombrero light.  I was a bit apprehensive – they told us the water was COLD, and Mom hadn’t been snorkeling since she hung up her scuba gear 3 years ago.  But … the sun came out and it was beautiful. 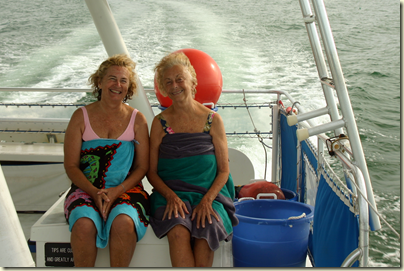 Mom looked as natural as a fish underwater! 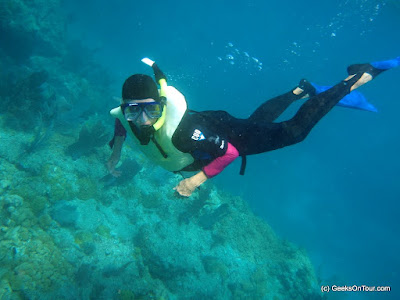 For dinner we had Stone Crab claws harvested by Debbie and Todd that same day! 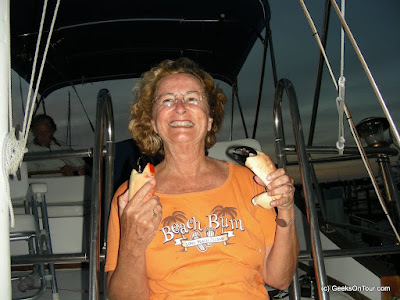 The next day we did a little sightseeing around Marathon.  They have a nice little beach. 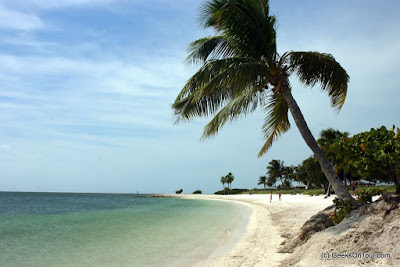 Then we went to Key West and took the Conch Train around to see the sights. 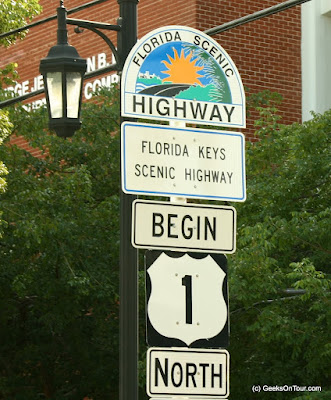 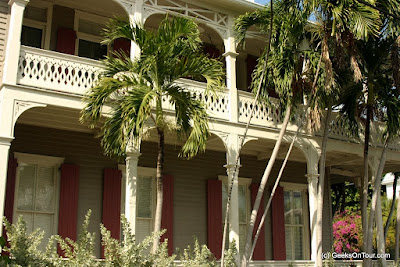 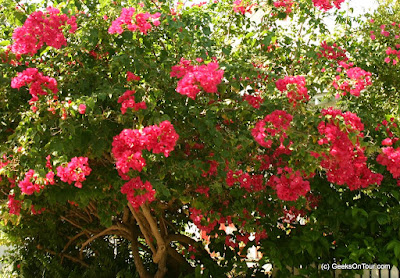 Thanks Debbie for a wonderful time! You’re the best! 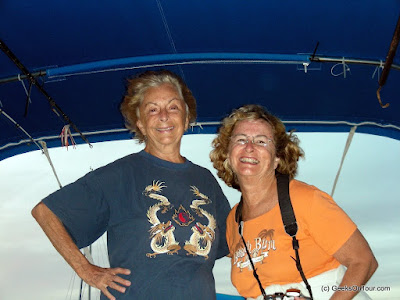 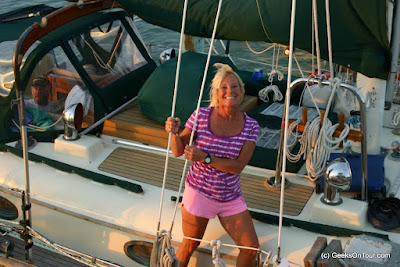 Build your own Computer -by Jim

When I first met Chris, I worked for a company that built and sold PC clones to small businesses.  We would buy the cases and motherboards and memory and drives and fabricate a custom computer for the needs of our clients.

Back then, a finished computer cost a lot of money.

It has been quite a while since I built my last computer, opting instead for preconfigured laptops.

My son, Devon wanted a computer for his birthday.  We could have scrounged a workable system from old parts and such, but decided to build new from a kit instead.  A good opportunity for father/son bonding. 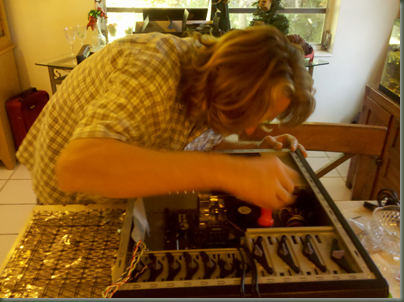 The kit was purchased at CompUSA/Tiger Direct.  They have a retail store here in Fort Lauderdale.

I got a bit of an attitude from the sales kid at the store.  He suggested that they could put it together better.  “You want it to work, don’t you?”

We had to install everything into the case. Power supply, motherboard, memory, display adapter, hard drive, DVD drive and connect all the wires and cables.

It was very rewarding when we got it all together and it worked!  No sizzle or smoke when we plugged it in and turned it on.  It came right up to the message “Operating System not Installed.”

These kits don’t normally include the Operating System.  We installed Windows 7 Home Premium 64 bit.  Then we installed the drivers for the components.  I like a desktop for home.  It still has plenty of room for expansion.

It kind of reminded me of having to build my first car way back when.  Well, I didn’t really build the whole thing.  I just had to replace the engine and electrical system on the ‘62 Triumph Spitfire.  Luckily, my dad had a Texaco service station with all the tools needed.

Did we save money by doing it this way?  Some, maybe.  I believe Devon has more pride in the accomplishment than if it was just something he received.

I just love taking pictures here at Thousand Trails, Peace River.  If you follow the link to the park’s website, you’ll be able to watch a video that Jim made back in 2007 when we stayed here for a whole winter season.  It was one of our very first Photo Story videos – I still like it.
Today is my birthday and I just can’t imagine anywhere I’d rather be. 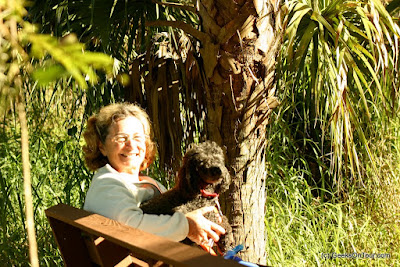 Here's our site, by the pickleball courts, and the hot tub! 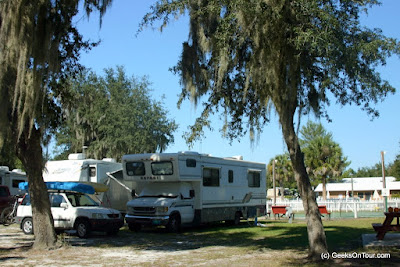 And, here's my favorite part ... the nature trail by the river. 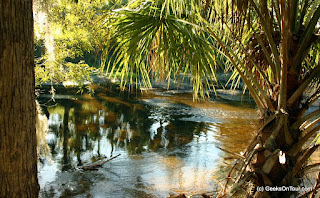 I made Odie pose by the 'Gnome King Tree' 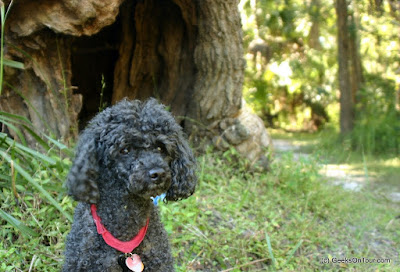 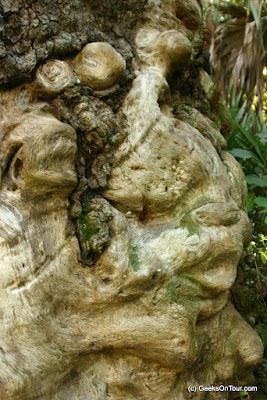 And here's Mom posing in her favorite tree: 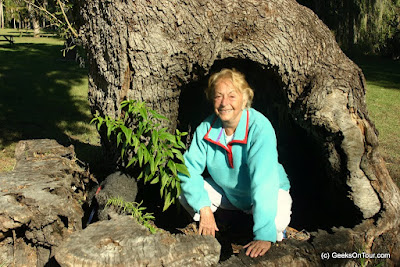 And, of course paddling the river.  Yesterday was a beautiful day and we took advantage. 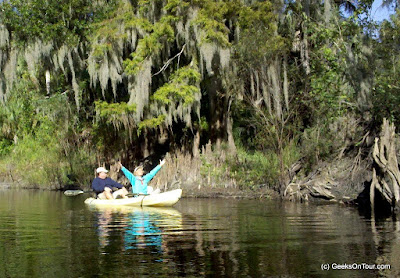 Here's a little video to give you a better idea:

Lazydays is one of the largest RV dealers in the country – I believe THE largest – and they have a great RV park attached.  It’s called Rally park.  Our very first rally we ever attended was here … in October of 2003 – the Datastorm rally.  And, we’ve been to a few others since.  We’re excited to be here to do our seminars as part of a Lazydays Friends and Family rally.  It’s a very nice park. 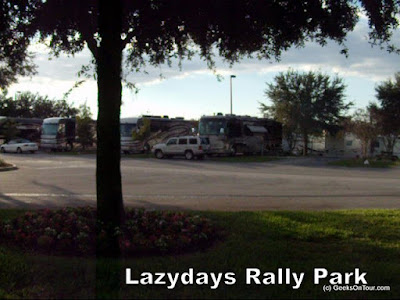 We taught our Google Earth seminar yesterday, and Picasa today.  We had a nice crowd. 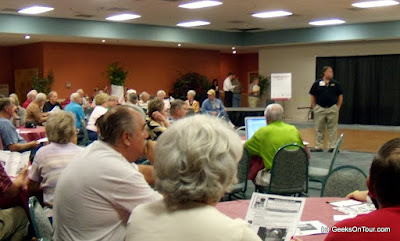 Here’s Raquel – our contact at Lazydays for this rally: 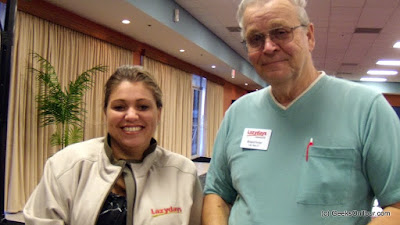 Lazydays also has a page on Facebook, and they posted a video that includes us.  Check it out: Video of Lazydays Friends and Family rally.

A stay at Orlando Thousand Trails

We always try to stop here on our way coming and going – we feel at home. 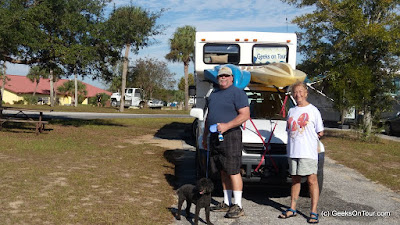 Even though we were only there one day, two nights – we took advantage of the amenities.  Jim and I even played a game of Pickleball!  Oohh I wish we had a Pickleball court everywhere we went.  It’s so much fun – and good exercise.  If you don’t know Pickleball, see this past post with a video.  We also soaked in the hot tub … aaaahhhhh

And, of course took walks down to the lake. 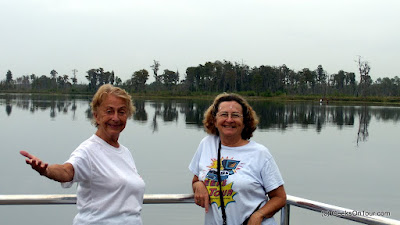 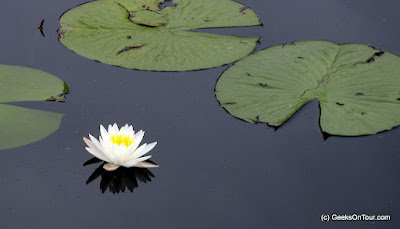 Now it’s on to Tampa … Seffner actually, for the Friends and Family rally at Lazy Days.

I finally got around to editing the video we shot up in Goshen, Indiana of our friends Phil and Tracey May from TechnoRV.  I had a real problem getting any of my video editing software to work with the files taken by our Kodak Zi8 video camera.  I don't know why ... I've done it before.  It seems as if the latest upgrade to Windows Live MovieMaker removed the ability to work with the .mov files that the Kodak camera takes.

I had to use the Kodak software to convert the files to .mp4 first - then I used Camtasia to do the editing.  What a chore!  The results are below - I hope you like meeting Phil and Tracey, we sure did.  This video is part of our series we call 'Gabbing with the Geeks.'  You can see all 9 'Gabbing' videos on our GeeksOnTour.TV website.
\Further your computer education**Subscribe to the Free Geeks on Tour Newsletter**
Posted by Chris Guld at 11/01/2010 No comments: