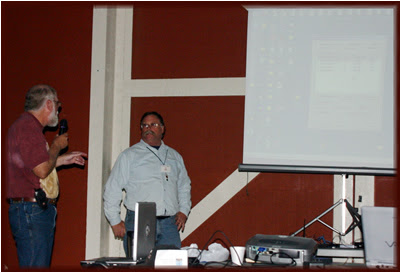 One of the topics of discussion was what channel should you be on. Here at the rally there are 50 RVs, all with their own Internet connection thru the Datastorms. Most of those RVs have more than one computer inside - so they use wireless networking to enable both computers to use the Internet. Jim pulled up his "View Available Wireless Networks" screen and counted 32! And, his netstumbler software reported that most of them were on channel 11 or 6. Here's just one screeful:

So, what does that mean? Is it important? Maybe yes, and maybe no. Think of radio stations. If you're trying to listen to a radio station on frequency 91.3 and you're driving down the road, it's going to get weaker and weaker. If another radio station that's closer and stronger is at 91.1 it may start interfering with yours. A closer station at 91.3 will definitely take over. Distance, strength, and frequency all combine to produce your listening experience. You will never have two radio stations, close together, broadcasting on the same frequency because the FCC doesn't allow it. Before the radio station can open their doors, they must apply for a license and the FCC tells them what frequency they can use. The FCC has specified that WiFi can use the *unlicensed* frequency of 2.4GHz which includes channels 1 thru 11. These channels overlap. Only 1, 6 and 11 are far enough apart to be distinct from each other. Add to the radio station analogy the fact that WiFi is *2-way* transmissions and you see lots of possibility for interference. Don told the audience that whenever he pulls into an RV park that has their own WiFi, he asks at the office "What channel are you using?" So, he can put his WiFi network on a different channel. (they usually don't know) He said that he has never experienced another network interfering with his, but he wants to be a 'good neighbor' and try not to interfere with theirs. His network is pretty powerful (surprise, surprise) and might easily overwhelm a neighbor's attempt to connect to the park's WiFi. So, how do you change your channel? It depends on your equipment, of course, but every wireless network is served by a Wireless Access Point (sometimes it's part of your router) and every Wireless Access Point has a configuration utility with an option for selecting the channel. Usually the utility is reached by typing the IP address of your router/Access Point. So, for our settings, I go to a browser window and type in 192.168.0.99, fill in the username and password and I get the following screen. You can see the option for the channel.

I have my own personal wi-fi network. We have 8 computers in our house, so thought wireless would be the way to go. I didn't encrypt it for awhile, and found out that my old fart next door neighbor was jacking my signal. When I confronted him, he said it's no big deal. After I encrypted it, he actually had the gall to come over and give him access to my network. I asked him how long he had been jacking my signal, and he said for a year. I told him that if he gave me $500, I would forget the previous year and allow him access to my network for $500 a year. He got pissed off and told me what to do.

It was a real pleasure meeting you at the Rally. I appreciate your tweaking my Wi-Fi while I was there; and, it's still working great.

Looking forward to seeing you again.

Actually, if your neighbor was using your wireless system for that long of a period, it is illegal. Depending on the state, it is categorized as 502.(1C) in the state of California Penal Code. Basically, it is unauthorized access with intent on a computer system.

If your neighbor gets real nasty about it, you could always shove that in his face....... That should shut him up for awhile.

Hey, Jeff, methinks if you're not going to encrypt it, it's fair game. Emotionally, if not legally. Good thing you finally smartened up.