What you would see if you were here

note: this started out as one of the writing assignments in the workshop.

Is that a volcano in the distance? I don’t think there are volcanos around here, but it is a decidedly pointed peak and there is a fluffy white cloud above it that looks like a puff of smoke. I can see the peak clearly from my vantage spot on the terrace of the residence Le Santucce in the peaceful, medieval town of Castiglion Fiorentino. 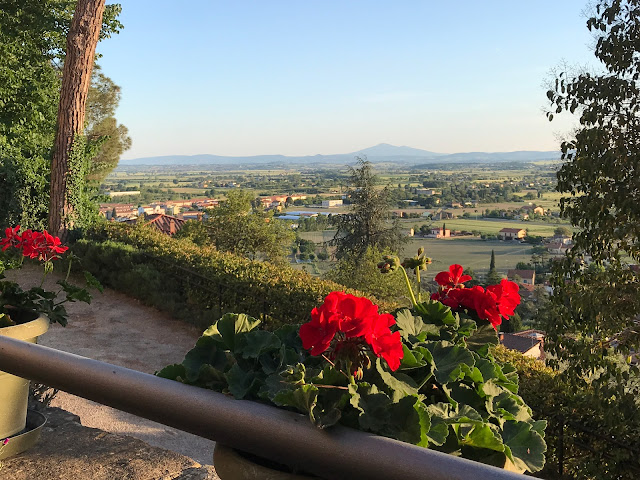 The cat lives here. I’ve always had a soft spot for calico cats. The mottled orange, black, and white colors are a work of art.  I try not to get too close because I tend to be allergic to cats, but I can’t resist a short scratch behind the ear as he jumps up to sit beside me on the cushioned love seat. I envy this cat with such a home. Looking toward the “volcano”  a lush, green valley stretches out. I wonder how much of this land is farmland. I do’t see any obvious signs, no rows of cornfields like in the American midwest. No furrowed fields lettuce, or tomato plants like in California. But the land definitely appears well-tended. Maybe it’s just too far away to see the rows.

A small plane flies overhead. I wonder if the pilot is out for a joy ride, just appreciating the beauty of the land? Or, is he or she on a mission? Places to go people to see? If I saw a small plane flying over fields in the states, it wouldn’t be long before it would be spreading pesticides. I like to imagine that there are no pesticides used here, that would mar my image of the pristine landscape before me.

A bell rings behind me. That is the bell in the tower of the castle. The castle is built behind not one, but two walls.  Thick, stone walls that must have taken decades to build. The walls circle a hill and the castle is on top of the hill. I wich I could see it from the air. If Jim could fly his drone here, I expect it would be an amazing sight. There goes the bell again. I understand that each town has a bell with a unique ring. You know you’re home when you hear your familiar ring. Did the people who lived here 1,000 years ago hear that same ring? As an American, it’s hard to fathom being in a place that has been continuously inhabited for 1,000 years - perhaps 2,000. I Google’d Etruscan time period because I heard that this place dates back to the Etruscans. Unbelievably, I see 768 BC - 264BC. That is well over 2,000 years. 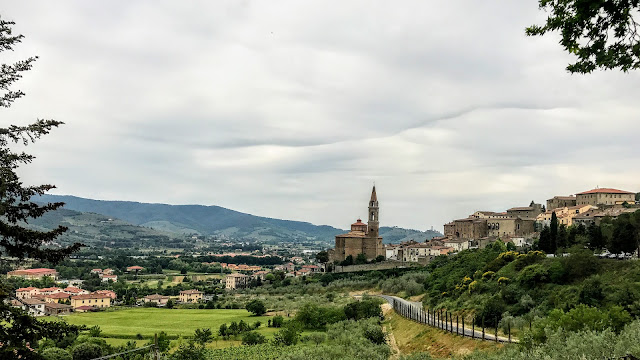 The town lies within the walls up and down the hillside. Narrow streets wind their way around with the stone buildings forming solid walls on either side. Walking along the street of this town is like being in a canyon. There are a few side canyons, even smaller pathways leading up or down from the main street. An occasional door and window indicate a home or a shop. I’m so curious as to what lies behind those doors. I feel like I’m on a movie set. The movie that comes to mind is Chocolat, set in a medieval French town and starring Johnny Depp and Juliette Binoche. 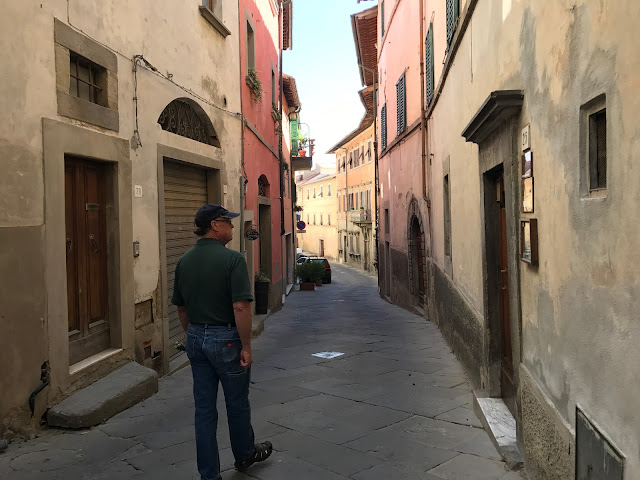 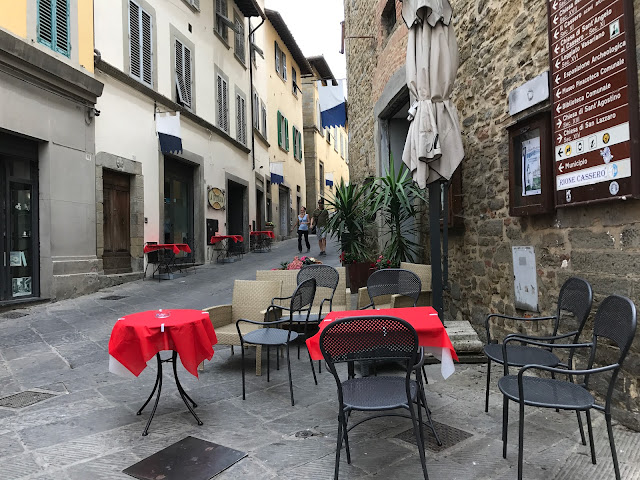 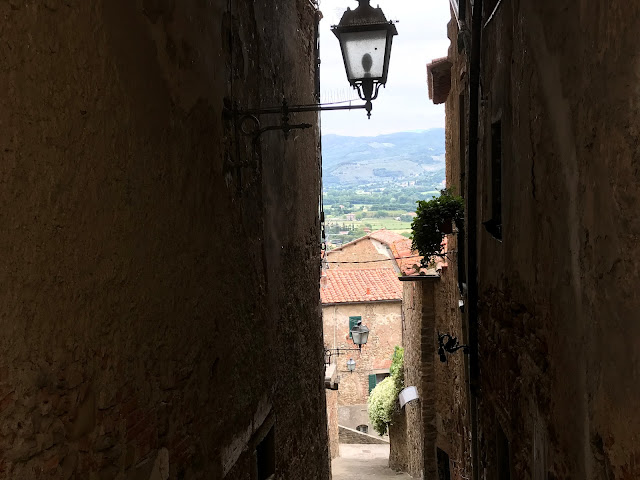 The Residence Le Santucce is partway up the hill and there is a road leading up to the outside entrance. This is the side where I sit and where the view is. But the “front” door is the one that opens to the narrow street thru town. We’re told that this home was little more than rubble after World War II, and the current owners did all the work to restore it. And, what a beautiful job they’ve done! I look at the rock wall in front of me and wonder how long it took just to build this 12 foot long piece. It’s real rocks, not something you buy in a kit at Home Depot! There are small rocks and larger rocks, rocks place vertically and some more horizontal. There is some kind of grout in between to hold them together, but still the rocks are placed a bit like a puzzle. It had to take days, months, years, to put it all together. I imagine that building structures like this is a lifetime pursuit, not a job that must be completed by a certain time. I’m reminded of a book I read called Pillars of the Earth, about the construction of churches throughout medieval Europe. Not only was this a lifetime pursuit, but multiple generations of lifetime pursuits! I wonder what it’s like to have such a different concept of time. No deadlines. No clocks. Lifetimes. 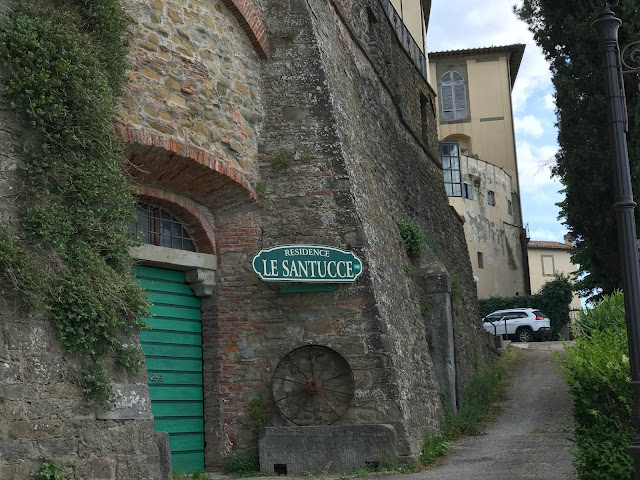 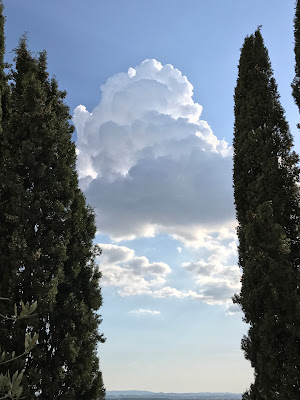 Speaking of pillars, right in front of me are trees that are at least 5 stories tall, and very thin, like sentinels. I believe they are called Cypress, but that confuses me because I am accustomed to a different kind of cypress - the kind that grow in a swamp in Florida and they have “knees.” These are very different Cypress indeed. They are icons of the Italian countryside.

I’m in Italy!
Further your computer education**Subscribe to the Free Geeks on Tour Newsletters**

Watch our Weekly Online Show on Learning Smartphones and Tablets!
What Does This Button Do?
Posted by Chris Guld at 5/24/2017

I'm so happy for you two doing this awesome trip. Kathy and I lived in Naples for three years while I was stationed there with the Navy. We toured extensively, but mostly the coastal towns and cities.