Life, Google photos, and weeks 14-15 of the pandemic

the RV lifestyle gives you a lot of practice with "Letting Go." It may sound a little painful ... lots of goodbyes.

... but as my favorite philosopher says, "By letting go it all gets done. The world is won by those who let it go." Now it's Google that is teaching me about letting go! I had to let go of Picasa to fully embrace Google Photos. I had to let go of Google Plus to move on. Now I'm having to let go of the Google Photos logo and the menus that I've been teaching since it's release in 2015. I knew this change was coming. Actually, I've been anxiously awaiting it. The last printing of my book was mid 2018. I started working on a new edition in the second half of 2019 with hopes of getting it out by the end of the year. Then I attended the product expert conference and learned about the major changes planned for 2020. Not wanting my book to be obsolete immediately after printing, I waited, and waited, and waited. Finally, June 25 the redesign was released.
So, what do I think of it? It's not my job to have an opinion, it's my job to explain. I do have an opinion, but it doesn't matter. The quicker I can let go, the quicker I can adapt. I covered it all in episode 194 of our YouTube show.
Still Staying Home
Our July 4 anniversary was celebrated by staying home. Some things are opening up, but new cases are climbing. We're fine at home, so that's where we're staying. Jim did go on a shore dive with Devon yesterday.  A friend of Devon's who is a brand new diver was the motiviation. They couldn't go kayak diving because we only have 2 kayaks. They has a perfect day - all went well. They reported seeing 4 sharks, and a large tarpon. 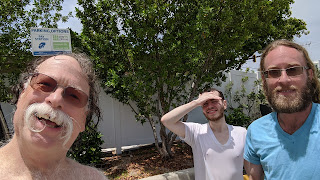 I guess I need to read your book. I still like Picasa and the organization better than Google. I don't know the difference between Google plus and photos. I hate having to use a new system every time Google decides to reinvent its system. So right now my photos are an organizational mess and I don't feel like messing with them. There's no hope for me. Haha