When you live in a house on wheels, it is good to roll occasionally.  More on that later.
Our generator stopped starting sometime late in our summer tour.  It had been working fine.  I knew that generators like to be used, so we exercised it regularly.  One day, it just wouldn't stay running.  I discussed the problem with fellow RVers and we all agreed it sounded like a fuel problem.  There are lights on the generator that indicate source of the problem, once decoded.  The lights said it was an electrical issue.  Who you gonna believe?  Knowledgeable RVers, or a stupid blinking light?
We were on our way to the FMCA rally in Madison.  One of the great things about rallies is the opportunity to get service from the many vendors.  Onan/Cummins was there with technicians and parts and everything.  We were so busy presenting seminars, we did 11 different ones, I was too late to get any work done.  So I got some literature and we went on to the Escapade in Wyoming with the intention to have the generator looked at during that part of the trip.
Procrastination is one of my better traits, when I finally get around to procrastinating.
Well, I finally had an RV mechanic look at the generator.  He recommended I take it to Don Hillman for service, as he was reluctant to do the work himself.  He also said to be prepared to spend big bucks.
I made an appointment for service.
The day for service came and we went through the list of things to do to roll the house, which has been sitting too long in one place and had lots of things in comfortable places.  Comfortable places for things are often not good places for things when rolling down the road.
The rig wouldn't start.
I called Don Hillman and said I might be late for my service appointment.
I had apparently left something plugged in which drained the starting batteries.  The emergency battery connect to the coach battery did not help.  These big Diesels need a lot of amps to start.  I called Good Sam Emergency Service.  They sent a truck with enough juice to get me going. 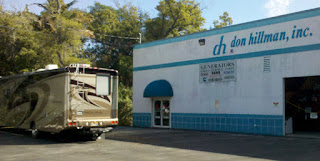 I arrived at Hillman's only a half hour late.  The tech they scheduled for me had been reassigned, but they got another tech right on it.  Great.  He spent some time figuring out what the problem wasn't, then determined the solution.  Brushes.  A small module in an inconvenient location needed replacement.  Less than an hour later, we had our generator fixed!

Lessons learned:
Don't leave things plugged in to drain the battery.
Start your rig regularly when sitting for a while.
Have a good list for stow and go.  Another list for sitting still.
Plastic bottles break less often than glass bottles.
Contents in overhead compartments shift.  I knew that!
Pay for good Emergency Road Service.  I knew that, too.

Be safe out there!

Merry Christmas and all the rest.

Further your computer education**Subscribe to the Free Geeks on Tour Newsletter**
Posted by Jim Guld, Mr. Geek at 12/14/2011

Glad to hear you finally got rolling. Was it big bucks or not?