It only took us 25 tries, but we produced a show we’re proud of this Sunday. We’ve been slogging thru the unknown jungle of Google+ Hangouts On Air to accomplish this. 25 times, we’ve set up computers, tablets, cameras, and microphones. We’ve used the Google+ tools to broadcast LIVE over the Internet to anyone who wants to watch. Like a moth to the flame, we are drawn to this technology. I love the opportunity to teach, and Jim loves making the technology work. We’re a really good team for this.

Several factors combined to make a good show yesterday. We’ve used the same configuration of equipment for several shows now, so we’re getting comfortable. We had a topic I really like (photos) and, most important, we had a great Internet connection. Bandwidth is KING. We could deliver the most excellent show, but if we have poor Internet, it looks like crap.

We wear our propeller beanies just to remind us not to take ourselves too seriously! Go ahead and click the picture below or go to our Youtube channel Youtube.com/2geeksontour and watch What Does This Button Do? Episode 25: Photo Organization. It’s 45 minutes total and we cover a tip on spare batteries for smartphones and tablets. We cover how pictures are organized automatically on iPads as well as Android devices, and we cover Google Translate as our App of the week. We also had several people watching live, and they asked some good questions. 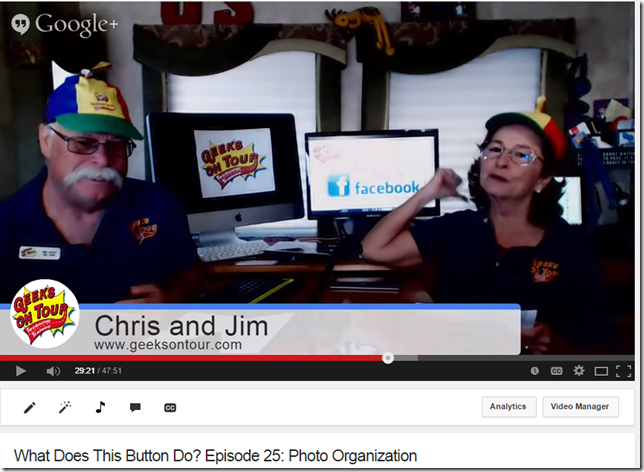 We’ve tried several different ‘layouts.’ Sometimes Jim is at his desk and I’m at mine, other times we’ve sat together side-by-side. We seem to like sitting together but across a table from each other. That has been our configuration for the last several weeks. We’ve also ‘downsized’ with the equipment. One camera that shows both of us, and one computer set to screenshare that is attached to a document camera for showing the phones and tablets. Jim uses his computer to run the show and he can switch the view just by tapping the screen on the camera view or the screenshow view.

And, we do all this from our motorhome dining table! 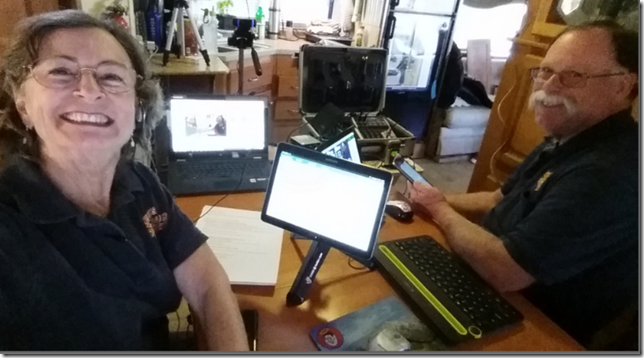 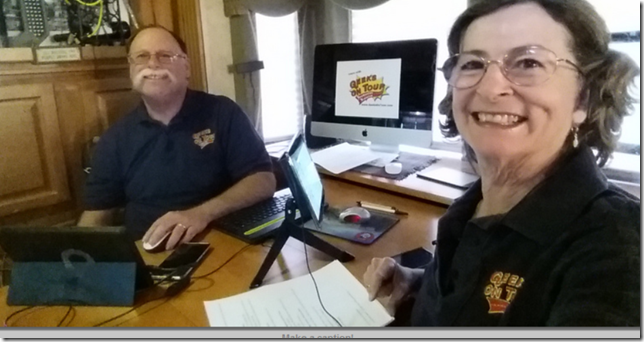 The most problematic area has been sound and microphones. Jim finally convinced me that he needed a mixer, so this is the latest addition to our studio equipment. 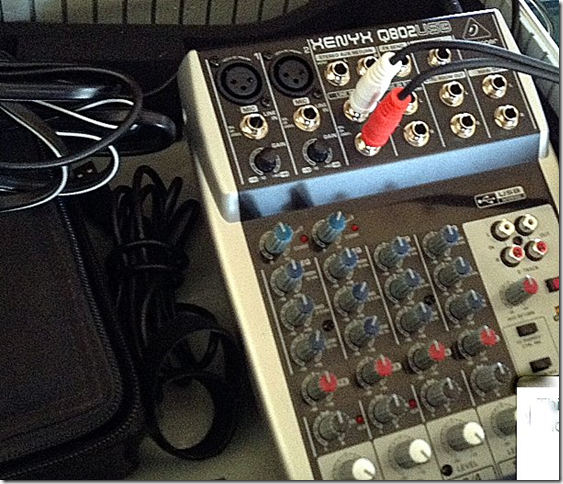 But, even that doesn’t help when we want to have some sound coming from the computer – like playing a video. Jim spent hours, no … days, trying to get that to work without producing earsplitting feedback. He came to the conclusion that it is impossible. Don’t worry – we’ll keep trying to do the impossible!

The other area we are still working to improve is the display of devices. In this show, we used a document camera. After a bit of adjustment, it looks really good – except – motion is blurry. So, when I tap a button and the screen changes, it blurs until the screen is set again. And, when I move my hand it’s blurry. The other technique we’ve used is to have a tablet as a participant in the Hangout, then we can use the rear camera of the tablet to show the other devices. That looks pretty good, (here’s a sample) but it’s awkward to use, and it takes up more bandwidth. So, we’re still looking for more options on that front. We’ll check in again after 25 more episodes and see how we’re doing!

Just when we’re getting the hang of this, we decide to go and try something more! We are such gluttons for punishment. We put out a call for anyone who wanted to join us in a “Study Group” for learning more about organizing pictures across mobile devices. With those people we are going to use the Google+ Hangout tools to have private video calls. Up to 10 people can be participants in the video call, talking, asking questions, showing their screens etc and the rest of the group can watch and leave comments. We had 63 people respond and we have now closed the group.