The plane to Havana was a charter since the Embargo still forbids commercial flights from US to Cuba. It was operated by Cuba Travel Services and was a comfortable 40 minute flight on an American 737 jet. Some weather delay made it a bit longer, but it is truly just a 40 minute flight to this place that has been forbidden for most of my lifetime and seems so far away!

The first thing we noticed after landing was the old cars. No, wait, the first thing I noticed was the uniforms of the women security agents in the airport! Mini skirts and black net stockings ... what?! But, I didn't take a picture of that. So, here's the old cars we saw from the window of our tourbus.
There are no product advertising billboards along the roads, but there are government/political billboards. This one caught my eye, Bloqueo, is the word Cubans use to describe the USA Embargo that prevents all commercial trade between the US and Cuba. Here is a description and timeline of the Embargo. It's because of this embargo starting in 1960 that they only have American cars from the 50s - and they've had to keep them running! With no access to parts, they even make their own. 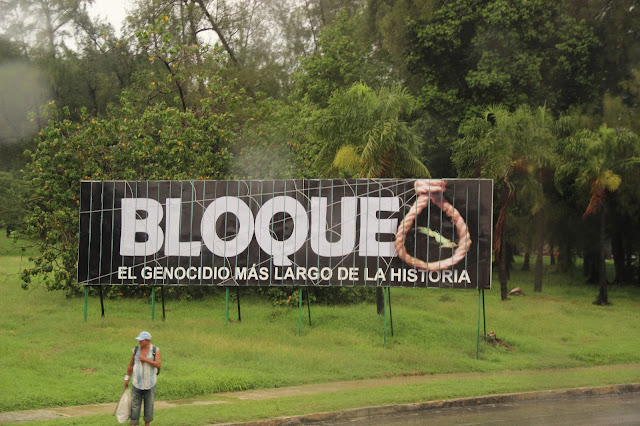 First stop - Plaza de la Revolucion. With the huge monument to their national hero Jose Marti. Jose Marti was long before Castro - his revolution was in 1895 for the Independence of Cuba from Spain ... part of the Spanish-American War. He was a poet and a writer as well as a revolutionary and he is revered as the voice of Cuban values regardless of what 'side of the aisle' you're on in today's politics.

Time for lunch! Our first "Paladar" which is a privately owned restaurant. Private business is generally prohibited in this Communist country, but they are allowing certain businesses since early 2011. These businesses include restaurants and Bed and Breakfasts. Our group took advantage of both.

That was the first of many Paladars that we visited. We had great food all around ... grilled fish, shredded beef/pork/lamb - Ropa Vieja, chicken, pork chops, lobster, and of course - rice and beans and plantains. Not much in the way of vegetables, but there were a couple of places offering pasta primavera, and I remember one or two salads. You were advised not to drink the water and that included being cautious of food, like vegetables, that needed to be washed - so maybe that was part of the reason. Hey! Who needs water when you have Rum and Beer? I think they served a Mojito with every meal, and cerveza or wine was usually the second drink. 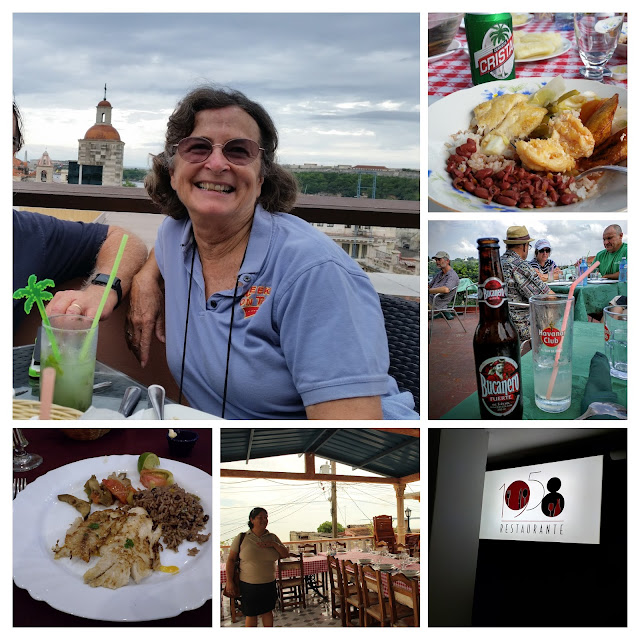 We stayed 4 nights in Havana - all at the Havana Libre hotel. It's sad to see how run down everything is. This is a first class hotel, second only to the Hotel Nacional, and we heard of people with ceiling leaks in their rooms, only 3 of the 6 elevators were working. We were on the 14th floor and we resorted to the stairs one time. Our room was huge and everything worked fine - in fact the air conditioning worked too good! I was cold most of the time. And, the view was SPECTACULAR. We took pictures from our window at all times of day. And, we had a buffet breakfast every morning with everything from papaya to banana bread to ham and cheese pressed (Cuban) sandwich to omelette stations. I was surprised at the coffee though - at least in the hotel, it was weaker than our normal American coffee, not the thick black stuff we know as Cuban coffee. 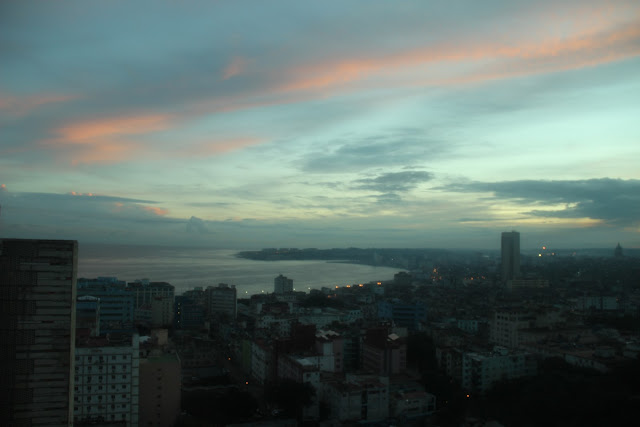 The way that Road Scholar gets a license to take US citizens to Cuba is by promising an educational experience with several "People to People" experiences every day. Jim and I both are passionate about learning ... so we were really looking forward to the lectures offered by local experts. We had 3 of these lectures while staying at the hotel.

I was just a sponge, soaking up so much information on an important topic, Cuba, and one with so little prior knowledge. Bottom line is that Cuba is more like US than not - it's a melting pot of people and cultures. It has been 'frozen in time' as of 1960 with Fidel and Che's revolution. Now that a thaw is imminent, there is both hope and nervousness about the future. Consider if we could take the US back to where it was in 1960 - knowing what we know now - what might we want to do differently? That is the opportunity that Cuba presents. It would be such a shame for Cuba to open for business only to become another Cancun.
Now that we have a context, we will be alert to any news about happenings in Cuba and will be watching with great interest. Raul Castro's term as president will end at the beginning of 2018. The presidency is limited to two terms of 5 years each - by Raul's own proposal. Let's hope the successor - probably 52 year old Miguel Diaz-Canel, has the smarts, and the heart to do the right things.
In speaking of the surprise announcement 12/17/14 by President Obama about re-establishing diplomatic relations with Cuba, our lecturer told us that Fidel Castro is quoted many years ago as saying that "The embargo will be lifted when the Vatican chooses a Latin American Pope, and the United States elects a black President!" Of course, he was basically saying "when hell freezes over!" As always, truth is stranger than fiction.
Another event of major importance to Cuba was the collapse of the Soviet Union in 1991. They had become totally dependent on Soviet support, with no ties to the US - Cuba was destitute in the 90s.

We used our one free evening to walk from our hotel down to the Malecon (the seawall and broadwalk) and then over to the newly opened US Embasy. For the same reason we've enjoyed visiting every Presidential museum in the United States, we thrilled at being in this place where history is being made. 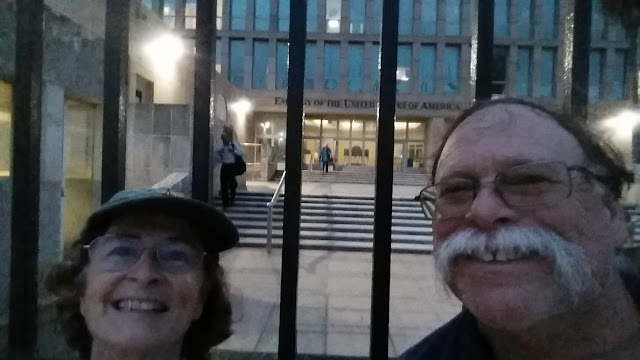 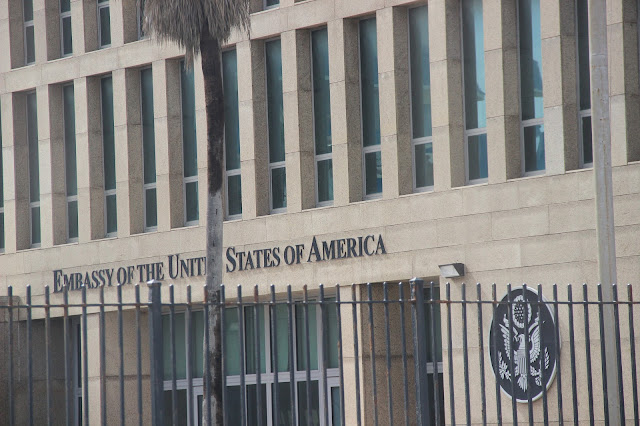 During our 4 days in Havana, we walked around the historic district, we rode in the classic cars, we were treated to music and dance performances, we visited Hemingway's home, and the Cabana Fortress. Here is a little video put together by Google Photos from our pictures and videos:

And, here is a bit more of the a capella women's choir who serenaded us at one dinner. They brought chills to our skin and tears to our eyes they were SO good.

And, since I can't possibly remember everywhere we went and what we did, here are the notes provided by our wonderful Road Scholar tour manager, Jocelyn ....

FRIDAY Dec 4th - delayed flight - Noon arrival Havana - straight to our first Paladar Lunch at La Moraleja - celebrated Nadine Sheely's birthday!  drive to Revolution Square (group photo) and first looks at classic cars!  Visit and tour through Colon Cemetary with Andres.  Check in at Habana Libre Hotel approx 4:30pm.  buffet dinner at hotel.
SATURDAY Dec 5th - buffet breakfast, followed by our first lecture on Architecture with Miguel Coyula.  Drive to Old Havana for walking tour of the 4 most important squares... Vieja, Catedral, San Francisco and Armas.  A visit to Taller Grafica cooperative.  Time to find some lunch and soak up some Cuban Culture.  A stop at the hotel before heading to Havana 21 for conversations with four 30-somethings... along with a cool beverage.  Dinner was at Paladar 1958 (with an included lightening show, pouring rain!)
SUNDAY Dec 6th - buffet breakfast followed by lecture on Religion with Maritza Corrales.  Visit and tour of Fine Arts Museum, lunch at Moneda Cubana, views of the city of Havana from the ramparts of La Cabana Fortress.  Stop at Nacional Hotel before heading back to Habana Libre.  Dinner was at La Fontana..... with a private concert by Vocal Luna... but the highlight for us all was the ride TO dinner in Classic Cars!!
MONDAY Dec 7th - departed the hotel for a brief stop at Cigar Factory Shop... and a little rum tasting.... visited Hemingway's Home (Finca Vigia) then had lunch at La Bonita in Miramar.  An afternoon performance by Mal Paso at one of Havana's Synogogues..... 4pm lecture on Cuban-US Relations by Camilo Garcia Lopez-Trigo.  Dinner experience on your own and opportunity to enjoy an evening of music and entertainment.

Next up - 3 days staying in a private home turned into Bed and Breakfast in Cienfuegos.

Watch our Weekly Online Show on Learning Smartphones and Tablets!
What Does This Button Do?
Posted by Chris Guld at 12/12/2015

Fascinating! From the history lesson to the incredible pictures, a great blog! Beautiful pictures. What a neat opportunity you both had.

I worked with a woman who was born in Cuba and lived on a plantation. She remembers the night the soldiers came and they had to escape in the night (could hear gunfire as they ran). They were able to board a ship in the harbor and leave. Of course her family lost everything..
Jan

Amazing photo and video stuffs with amazing writing about Havana. Thanks author. I am planning to visit Cuba soon. But I do not know whether I will visit Havana or not.
Nepal Trip