After you've traveled by RV for a few years, you make friends and see them at various places all over the country. In evacuating Florida, we knew that some fellow RVers and Hurricane Irma refugees, were safely parked in Alabama. We pull into Rainbow Plantation Escapees RV park in Summerdale, Alabama and Chris and Cherie of Technomadia came out to greet us. We also had a text message from Chris Yust to come over for happy hour!

We're all breathing sighs of relief for our own safety, yet glued to our phone screens for news of friends and family still in the path. For Chris and Cherie, they are fearing the worst, yet hoping for good news of their boat that they left tied up in Marathon - Florida keys.

The first night (Sunday) we gathered at Chris and Charles motorhome. I was able to get my mini-poodle fix as we all drank wine, felt grateful for being out of harms way, and continued to search for news about those still in Florida. The second night was Monday 9/11. That was the worst day for the hurricane in mainland Florida - we didn't do any partying that day. 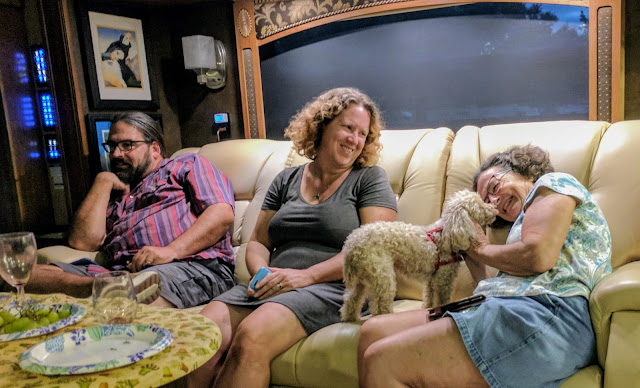 Tuesday, Sep 12 was the day for the big Annual Apple Event where they announce all their new products. Chris and Cherie offered to host a viewing party in their motorhome where they can project the event onto a big screen. They know a lot more about the Apple world than we do, so this was a geek's dream to get their commentary as well as watching the event together.

It has to be one of the very coolest parts of RVing that you form temporary neighborhoods where your friends are right next door and you can visit each others' homes and party.

We hosted dinner at our place that night ... which meant sitting on the ground outside our tiny motorhome. Hey! It was beautiful weather. We had dinner then went for a nice walk.

We had decided to stay just one more night, Wednesday. Chris and Cherie would also leave the next day, so we had to have another party! Everybody but us seemed to know about this great restaurant nearby called Big Daddy's grill. A beautiful setting, good food, and great company.
The CH and J group! Three people named Chris, 2 more start with CH - Charles and Cherie, then there's Jim and Joe.

Jim's son, Devon lives close to our townhouse in Fort Lauderdale. His home came thru the storm unscathed, not even losing electricity. He checked on our place and said all was well, but we had no electricity. Charles and Chris had their home with them and they got reports that their RV lot in Ft. Meyers looks good. Chris and Cherie still don't have a first hand confirmation, but they did see an aerial photo that showed their boat is still tied up to the slip where they left it. It's still afloat.
My Mom's assisted living facility was spared any damage during the hurricane, but they lost power. It was quite disturbing when I tried to call and could not get an answer, but it didn't take long before Kathy - the manager in the memory care wing - called me on her cell to let me know that Mom was fine. The worst part was no air conditioning, so they were taking all the residents out to the Coral Springs center (a mall?) for the day where they could stay cool and get something to eat. I heard from her Hospice care aid, Kerrie, that the power was back on by Wednesday evening. Both Kathy and Kerrie are wonderful. They pay close attention and take very good care of Mom - I rested easy Wednesday night.

Once again, we are faced with a decision of which way to go. If it had been a short evacuation to Gainesville, we would clearly have just gone home. But, as it is, we are now 2 days away from home and it's nearly a week later. Our next gig is Sep 24 in New Orleans for the Carriage Travel Club rally. We are only a couple of hours from New Orleans. We have 10 days to work with. We had fully expected to go home, but, being the lazy people we are, and enjoying RVing as much as we do, we decided against the trip back to South Florida. Another fly in the ointment is we had planned to continue on from New Orleans and take our time getting to our next gig at the Workamper Rendezvous in Heber Springs, Arkansas. After that we go to Illinois, and we would not be back in Florida until November.
Choice 1: from our current position at #1, go home right now, then back to New Orleans and on ... 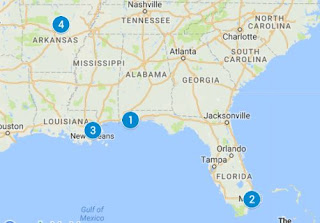 Choice 2: from our current position at #1,  go to New Orleans, then home before heading on to Heber Springs and beyond 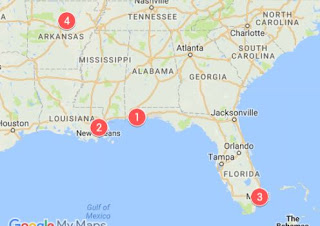 We picked choice 2. So, we have a week in this area. Then the rally in New Orleans. Then it will be decision time again - do we really need to go home? Or can we just head to Arkansas? We have two weeks in between, plenty of time.

Life was so much simpler when we were fulltime RVers! There was no "going home" we were always home. Then we just moved on to the next place and we were "home" there. I love Fort Lauderdale and the townhouse, but it does complicate things sometimes.

It looked more like a "Chris" reunion than a hurricane party. :-) Seriously, glad to see you all are safe and hope the Y-Not did not receive any storm damage. We decided to go to Biloxi instead of the SKP's park in case Irma decided to move more to the West. Biloxi gave us more options if that happened. We were in the process of having Chris change our insurance policy when all this hurricane stuff happened. You and Jim have safe travels and glad to hear that everything at the sticks and bricks home is good.

Tom - where do you stay in Biloxi? We spent the night at the Elks lodge there on our way to New Orleans.

Glad to hear your place and family are all ok. Travel safe!!

This was one awesome hurricane party! So glad we got to keep each other company, distracted and share in the scary moments together. Life long memories made, and friendships deepened.

Meaher State Park in Spanish Fort, AL is a great place to stay when visiting Biloxi. It is a few miles off I-10 near where the USS Arizona is docked. It is right on the Bay and where we chose to wait out Irma.

I apologize I meant to say when staying in Mobile AL not Biloxi.