One of the issues of living on the road is finding medical care. Some people see this as a severe negative of the RV Lifestyle. They purposely schedule a month or two each year at 'home' so they can get all their appointments in with all their doctors. We're still young enough and healthy enough that we don't have a long history with any particular doctor. I have actually found it a positive aspect of our lifestyle. There are walk-in medical clinics all over these days, and we've had really good luck with them. And, since we're usually seeing a doctor who doesn't have our history, they spend a few more minutes with us! I have learned to get copies of everything that is done and to keep those records with us. The only real problem we've had is with Dentists. We were in California when it was time for a teeth-cleaning, but we couldn't get an appointment for that. We had to have a Dentist exam before we could get our teeth cleaned and we couldn't find a Dentist who was taking new patients. So, we had to wait till we were back in Fort Lauderdale for that. We've had great luck with Veterinarians for Odie. I especially liked the woman we visited in Lake Havasu City. Unfortunately, when we tried to visit her the same time the following year, she had retired. She is the one who convinced me that having a dog's teeth cleaned was important to their health and longevity. It's time for his annual vaccinations, so we asked around and got a recommendation for Dr. Hendry here in Wauchula. Odie sat patiently as Dr. Hendry gave him his shots and I chatted with the Doctor. Come to find out his great-great-grandfather was a pioneer in this area ... I had notice that there is a neighboring county called 'Hendry'. 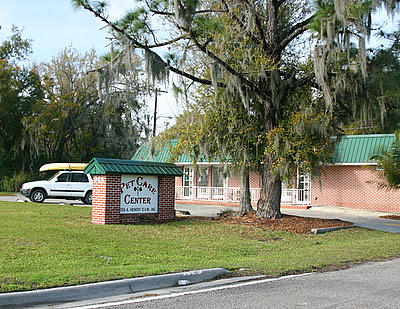 He said it was time for Odie's teeth to be cleaned. What do you think of his 'Pearly Whites' now? 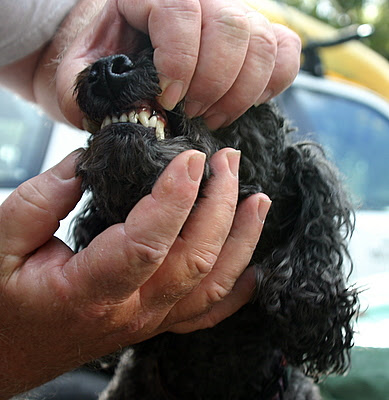 Having a dog's teeth cleaned is a pretty big deal. It costs about $140! Mostly because they have to sedate him to do it. As long as he was going to be under, I asked if they would remove a cyst on his back that's been bothering him. I didn't realize that would be such a big deal. Poor Odie! 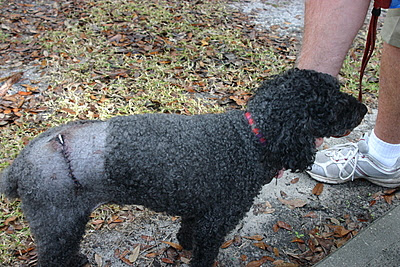 It doesn't seem to bother him as much as it bothers me. He's eating, walking, and generally acting fine. But, he told me that's enough of Vets for a while!
Posted by Chris Guld at 2/14/2007

Yep, you got to have their teeth cleaned at least once a year. Just had one of mine in for a teeth cleaning and her gums had receded and they ended up pulling ten of her teeth. Poor thing. I've been taking her in to get her teeth cleaned once a year. Glad I do that.
It's cold here in northern Indiana and we have lots of snow on the ground.
Any chance you can send me a bag of sunshine? Stay warm and safe.

That is not the story I heard.
You were walking Odie on the river nature trail where he was attacked by an alligator. Chris fought the alligator and Jim ran away.
Chris wrested the limp body of Odie from the jaws of the gator after a mighty struggle.
THAT is the reason for the vet visit.