Screencast Camp at TechSmith in Michigan

We make our living with our Tutorial Videos.  And, I create those tutorial videos using screencasting software called Camtasia by TechSmith.  So, when I saw that there was a new version of Camtasia (8) and they were holding a ‘Screencast Camp’ at TechSmith headquarters.  I consulted the map and our calendar and decided we could make it work.

So – last weekend, Jim and I attended Screencast camp at TechSmith headquarters in Okemos, Michigan (pronounced Oh-ki-mus).  They were serious about the ‘Camping’ part.  Some folks came with tents, many of the TechSmith employees slept on air mattresses in their offices, but we made a real hit with our motorhome in their parking lot.  Jessie was all prepared for us and had roped off a spot for us to park.  They also ran an extension cord out their office window for us to plug in.  A video crew even interviewed us – if we get a copy, I’ll post it here. 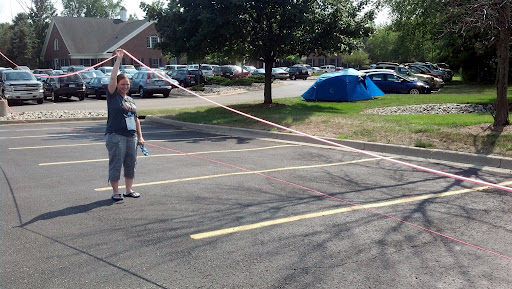 Our reserved parking space at TechSmith - Jessie was prepared for us. 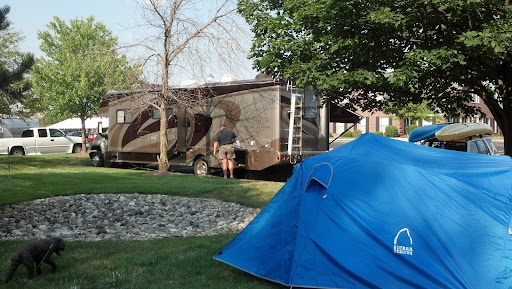 They weren't kidding when they called this 'Camp.'

They fed us breakfast, lunch and dinner for the whole weekend!  And, they even had homebrew beer that they made! 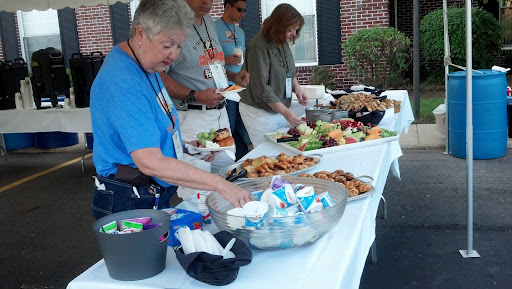 They fed us good 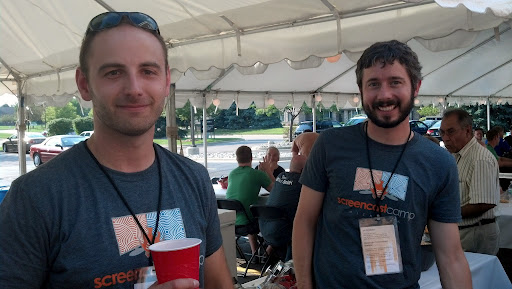 In our online/digital world, it is such a treat to attend functions like this where we get to meet the actual people behind the software that is so important to us.  It felt very similar, just a lot smaller,  to when we visited Google HQ in 2009.  The same young, energetic staff, the same emphasis on fun and creativity at the company.  It looked like everyone really enjoyed working there.  And, they are very passionate about their excellent software.

I am very excited about all the new features in version 8 of Camtasia.  I even took advantage of signing up for one-on-one time with the developers to learn the new animation features.

The conference itself was built on a Barcamp model of UNconferences. So, on Friday night everyone gathered and tossed out ideas of sessions we wanted to either take, or give.  It actually worked better than I expected.  I am accustomed to prepared sessions where you know what you’re going to learn.  But … I did learn a lot – and Jim did too.  There were sessions on how to get the best quality sound, there were sessions on the new features in Camtasia 8.  I think everyone agrees that the most fun and valuable session was Screencast Commandments taught by attendee Dan Nunez … he did the same talk last year and I watched his video on it, but seeing him in person was great!

They also gave us free copies of their software, including their flagship product Snaggit which I’ve never used, so Jim took the session on Snaggit 101 – and maybe he’ll be making some of the content of our videos now!

I loved their comfortable breakout rooms – all equipped with big screens and projectors. 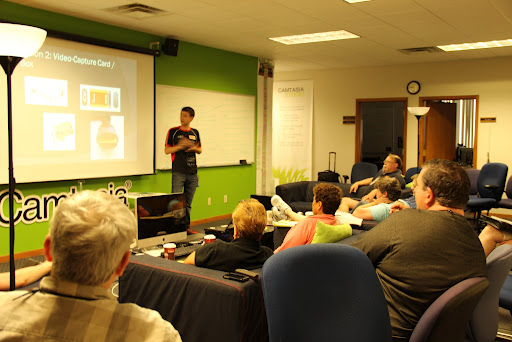 I loved their comfortable meeting rooms.

We took a tour of their facilities and got a kick out of their evident sense of humor.  Here’s one employee’s space where the top of his cubicle wall demonstrates getting your ducks in a row.

Ducks in a Row

And, we got to see the studio where their monthly online show – The Forge -  is recorded.  Here’s The Forge episode that introduces Camtasia Studio 8.

And here I am in the Forge studio;

Chris on the set of TechSmith's "The Forge"

It was also a treat to meet Betsy Weber.  Her title at TechSmith is ‘Chief Evangelist’ … isn’t that great! 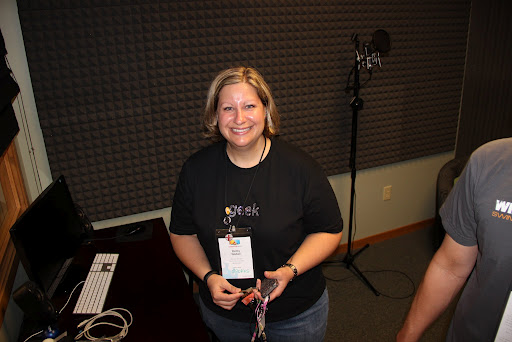 The most important outcome of our weekend visit at TechSmith was getting inspired to do more with our Screencast videos.  I’ve actually signed up for a 6 week online course to learn more of the specific How-To’s of Camtasia – but I’m doing that with the confidence that I understand the company behind the product and I know where I can go for more support.

THANKS TECHSMITH – we loved the weekend, and we’re inspired to do a lot more with your products.

I used Camtasia in my professional world as Training Manager. It is a great, easy to use product.