Pack up, Take a Drive, See a Lake

The rally's over, where'd everybody go? We're never in a hurry to leave - we're tired and enjoy a day of rest after rallies like this. Besides, we had our weekly "What Does This Button Do? Internet show to do on Sunday. When we got back from breakfast, we found that the electricity had been turned off. Oh well, this wasn't the first time we had to do our show on generator power.

After the show we just took a leisurely walk around the fairgrounds. We always marvel at how these mini-cities can get all set up, be active, then disappear within 5 day's time.

On Monday we also took it easy. We had to take Ally to the airport, then we planned to hit the road and head south. Our next destination was to visit friends in Eureka, CA. We didn't really expect to do anything in between. I was actually looking forward to some boring drive time to relax, but it wasn't to be! I looked at the map and noticed how close Crater Lake was. And, there appeared to be a route that would take us right by the lake and continue on towards Grant's Pass. So long to boring!

I'm sure glad Jim was driving! It was a narrow, curvy road with some steep dropoffs on the outside edge. 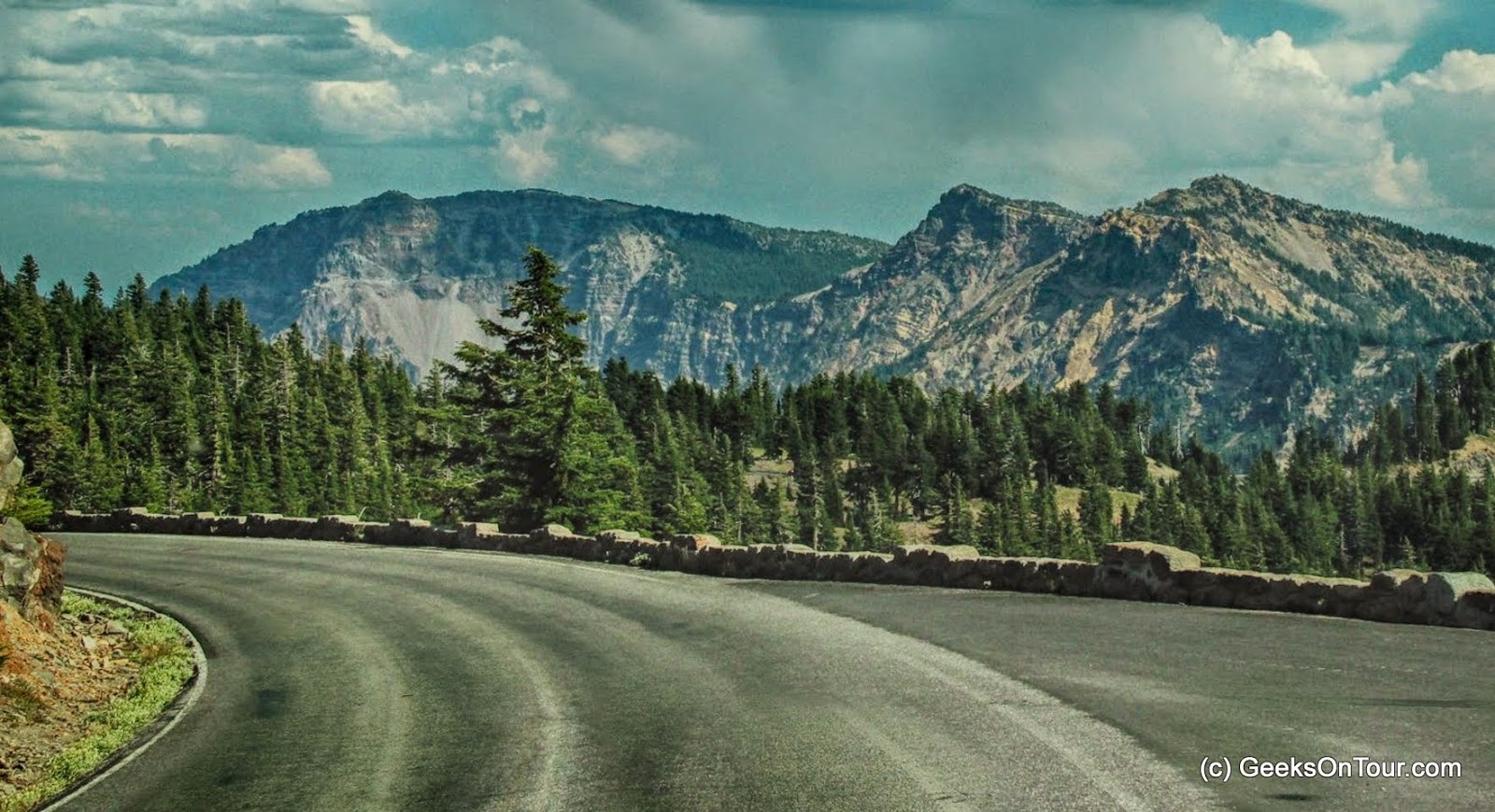 The HDR photos above
You might notice that a few of the pictures above look almost like paintings rather than photographs - the colors are too vivid and the lines are too etched. That's because they are actually 3 pictures put together as one in what is called HDR, standing for High Dynamic Range. This is more than the HDR setting on your smartphone or tablet. I took the 3 originals with my Canon T3i digital SLR camera and then uploaded them to Google+. The auto-awesome feature puts the 3 originals together into a 4th HDR picture. Then I decide which ones I like and include them with my photo library. I know that some of them are a bit too much, but once you start getting used to them, the real photos look so plain.  If you want to know more about how Auto-Awesome works, here's an article I wrote about a different type of Auto-Awesome: http://picasageeks.com/2014/05/picasa-tip-smile-its-auto-awesome/
If you have a Verizon Unlimited Data plan:
And, on another techie note: we've just heard a notice from RVMobileInternet.com (a service by Technomadia) that the loophole that has allowed many of us to upgrade our smartphone while still keeping our Unlimited Data Plan - is going away soon. You cannot upgrade your phone at the subsidized price and keep your Unlimited data plan, but some Verizon reps have been willing to use a technique of swapping plans with another line. The Verizon representative who performed the upgrade for me is Ryan and his number is (740) 403-8414. If you have a smartphone with a Verizon Unlimited Data plan and you want to keep it while upgrading to a new phone - call him, or someone willing to do this Verizon contract swap before the 'swapping plans' loophole is closed on August 24.

Gee...you were just in my back yard! I should have waved. I don't have a Verizon unlimited plan, hence I don't have the luxury of watching your videos. Would love to do it if I could, they look great. ah well. I keep wondering how long anyone, even cable providers, will have unlimited bandwith.

I love the fisheye photo!
The of you two is great too.