A non-planned and perfectly executed tour. Stonehenge, Titanic, Isle of Wight and more

When all the festivities for Phil were over, we hopped on a train and traveled a few hours to Southampton. Jim had booked us a room on Booking.com and we knew there was lots to do there - we had 3 days.
First, we had to see Stonehenge. And we did it all with trains and buses. We thought we had to spend $300 each to take a tour, and all the tours were booked. The train round-trip from southampton was $52 and the bus tour to Stonehenge was$80. That's for both of us. So, no problem spending $$ on dinner! 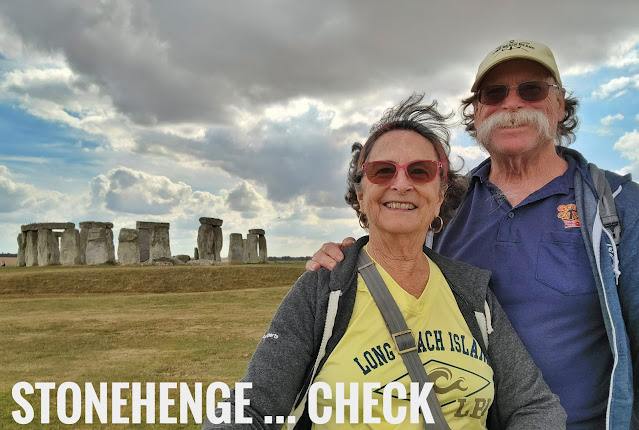 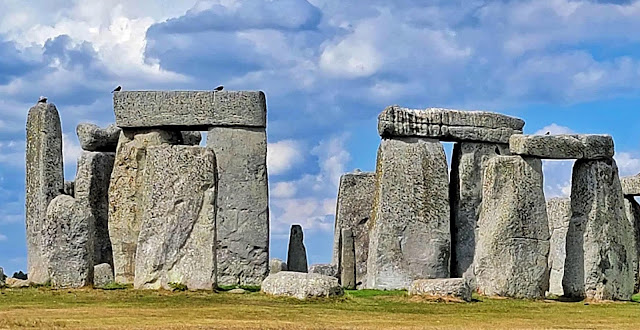 Next day, we were in our <$100/night room, near the harbor in southampton.  This morning was the first of September and there are some computer projects I like to get done on the first. We woke up about 7:30 and made some coffee, then turned on our computers. I was thinking, anyone else in this situation would be saying, hurry up, time to get going. There's so much to see and do today. And it has to be today because we leave tomorrow. But no, we had some things to do, and we like to relax in the morning. We'll see and do whatever works out.
We had two things on our want-to-do list today: the Titanic museum and a get ride to Isle of Wight . We left the room and started walking to the museum-about a mile away - when Jim notices a building that says Solent Sky - an air museum that he read about and would like to see. He said, maybe we'll stop here in our way back because it's so close to our room. I said, no. If it's something you want to do, we go now. Never pass up an opportunity when it's offered, you don't know if it will work out later. It was wonderful. Great old planes, wonderful history lots of photo opportunities. And the cell signal was even good enough that we could do a live stream. 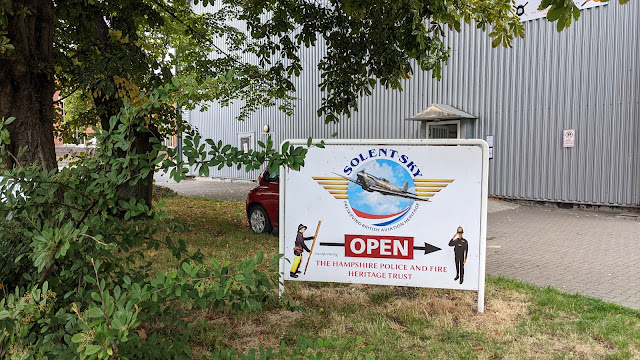 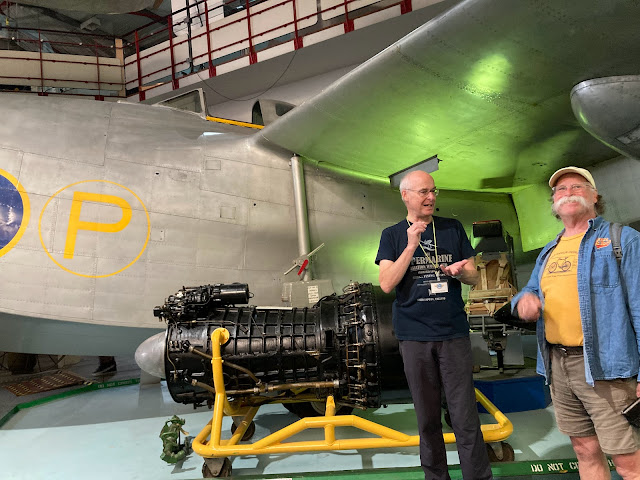 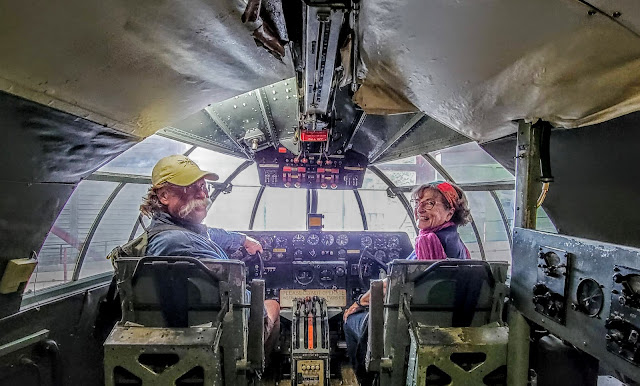 Yes, we spent some time there, and it might mean we wouldn't make it to Isle of Wight. So be it.
We continued our walk to the Titanic/Southampton museum. The online ticket site said "not available" for today. I figured that was just the online ticketing, but want sure. We walked in the museum and had no problem getting 2 tickets. There weren't many people there. We watched all the little videos, read about how devastating the loss was to southampton: every street in southampton had at least one person who died on the Titanic. Jim played with the simulation of captaining the Titanic out the Solent, and we had a nice lunch in the museum cafe. 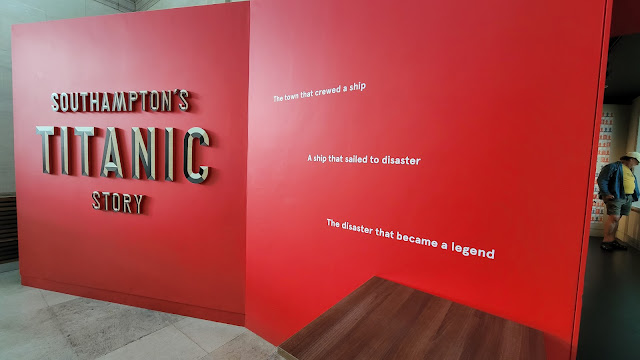 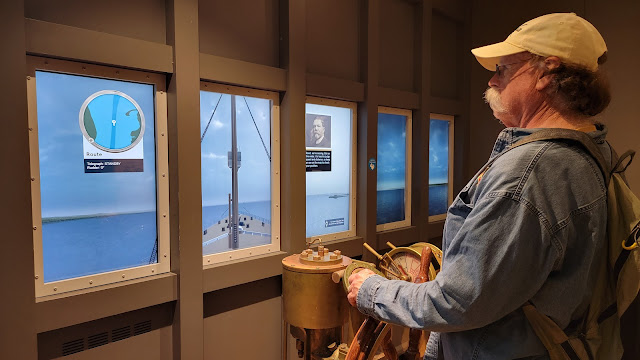 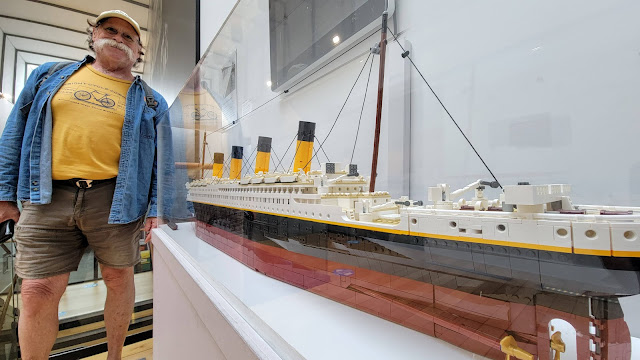 By the time we were done, it was a little after 3.
Perfect
We walked to the harbor and found the ticket office for the jet boat to Isle of Wight. The next one was leaving in 10 minutes! We tapped our credit card to their terminal and paid 22 pounds for 2 tickets.
What a day, quiet, and luxurious ride! A beautiful day with the harbor full of ships and sailboats, we arrived at West Cowes about 4:30-5, and we were hungry. How perfect ! Unfortunately, most of the restaurants didn't open till 6-7. But, after a walk thru town and strolling the waterfront, we found one where the bar was open now and they started serving food at 5:30. It was especially good food. Black Rock - they put a hot Rock on front of you with raw scallops and a steak. You cool your own! It was scrumptious. 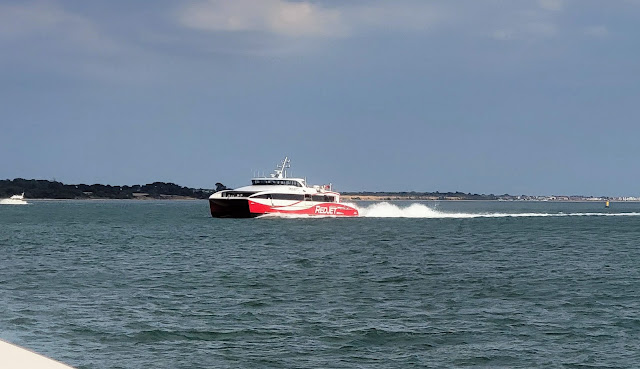 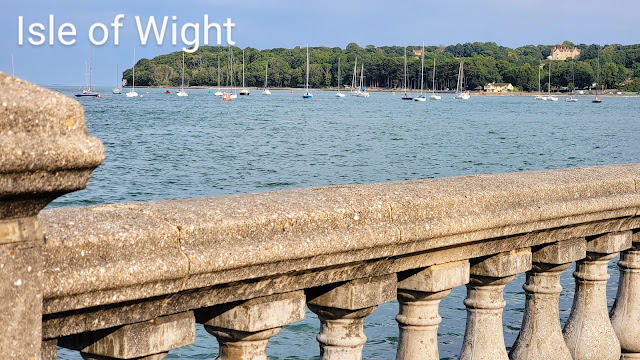 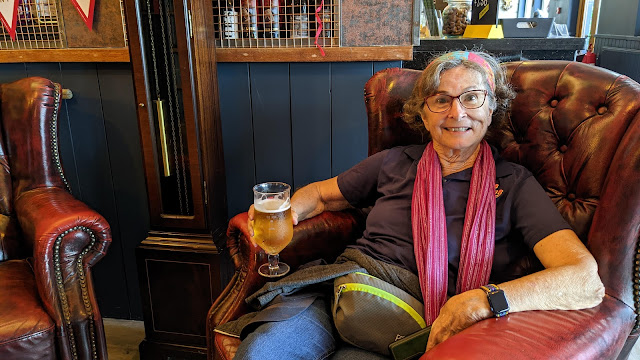 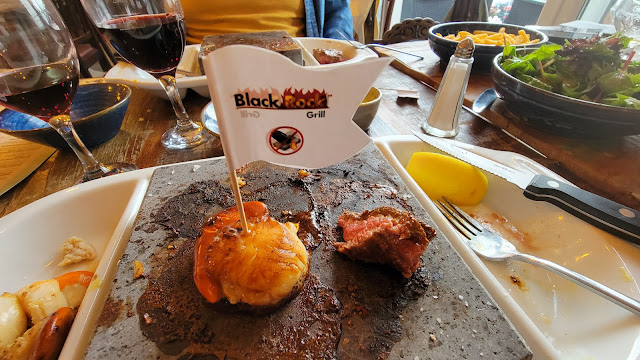 We finished in perfect time to catch the 7:05 ferry back to Southampton, walk 15 minutes to our room, unwind, and crash. We ready to wake up, pack and get to the train station for a9:30 ride to Gatwick.
Posted by Chris Guld at 9/01/2022