Since we just went through hurricane Katrina, you might think I mean recovery from the wind, rain and power outage. But, no - the hurricane was at most a minor inconvenience compared to recovering from my computer crashing at the beginning of last week! It has been coming for a while - my computer would come up with the 'blue-screen-of-death' rather than booting up normally. This has been happening over the last several months. Jim has always been able to bring it back to life with use of the original CDs and the chkdsk command. But, it's been getting worse - windows updates have been unable to load, my anti-spyware program disappeared and refused to reinstall. And, my Internet connection would hang up ever hour or so, requiring a reboot to get back in business. My computer is 2 years old and I use it hard. This is one thing we teach in our 'Practice Safe Computing' seminar - that a 2 year old computer that is used on the Internet a lot will need to be reformatted. So, I vowed that the next time it crashed - I wouldn't tell Jim to revive it, I'd tell him to reformat and reset it up. This is a painful process. It took Jim the better part of 24 hours to reformat, install the operating system and all the basic drivers for the computer to work. Then I've been spending the rest of the week putting my data and other programs back from backups and configuring everything the way I need. Things like my Macromedia suite that I use for web development ... I use Coldfusion for the database part of things and it is very particular about how it is installed. I had Jim partition my drives into a C (for operating system and programs) and D (for data) so that, next time this happens I only have to wipe out the C drive. But - Coldfusion didn't like having data installed on D - it expects it on C. Then, when we tried to raise our satellite dish and get Internet (when the power was out) we discovered that, even though we had all our necessary CDs, there had been lots of 'tweaks' we had made over the years that made everything work. That took another day and calls to tech support to get it online. By that time - the WiFi was back up! My photos are probably my most precious backed up data. I make a CD at the end of every month with that month's digital photos on it. I like to have all my photos on my computer for when I want to make slide shows etc. So, I spent hours copying 20 CDs of backed up photos onto my computer. One CD had gotten pretty badly scratched and didn't want to work ... that one took me an extra 2-3 hours skipping over the photos that were on the scratched parts. Then, I wanted to back up my newly restored data, but I had to find the special backup software that came with my external DVD recorder first ... I found it and installed it. We're pretty good at keeping ALL our original CDs in special CD wallets so we know where they are. But I still can't find the CDs that came with my camera so I can download photos to my computer. Luckily it's installed on Jim's computer as well, so I can download from camera to Jim's computer, then copy to CD and bring them over to my computer. Weren't computers supposed to save us time??? Between Jim and me, we've spend a good 40 hours ... and, that's just to get me back to where I started a week ago! I'm telling you all this in hopes that you will be prepared when (not if) it happens to you. 1. make backups regularly: I started needing 6-7 CDs in order to backup what I needed, so we bought a DVD recorder - now I can backup with 2 discs. For precious things (like photos) make more than one backup! 2. keep all your original CDs safe and accessible. That includes operating system, programs AND all those little drivers that come with pieces of hardware - like WiFi adapters and external drives. OK, back to the hurricane. It was only a category 1 (75mph) when it hit us, and it did veer south at the last minute - hitting Miami a lot harder than us. Even a weak hurricane does a lot of damage. As some news reporters observed, "Hurricane Katrina was nature's way of pruning South Florida." Here's some photos: 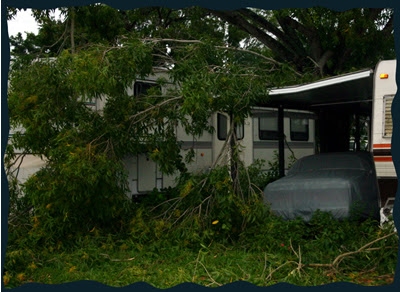 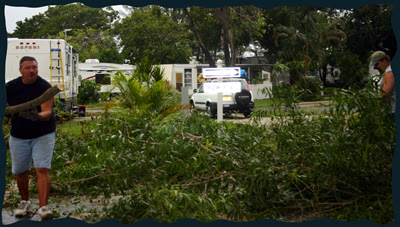 This was in Mom's complex: 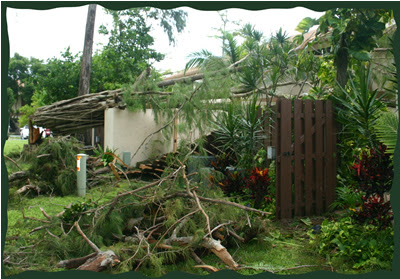 The worst part was that electricity was off for a couple days. Driving was dangerous because the traffic lights weren't working. Jim's sister remembers last year when they were without power for 10 days in West Palm Beach. She didn't hesitate to go buy a generator for the folks when she learned their power was out. Here's Jim helping to set that up: 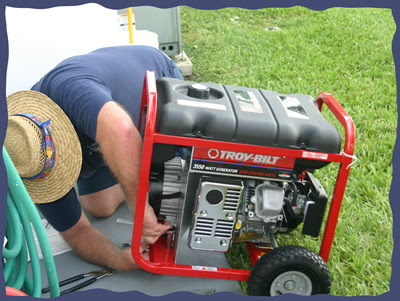 A HUGE reason I love my Macs, in 15 years I have never had to do that. Not to mention never a virus or spyware. I have had to do that exact same thing on my PC's, yes it sucks.

Have you considered using a different hard drive that is an image of your properly working drive? If you do that every couple of month's, you can just swap drives and keep going while you extract the bits you need from the failed drive. Also, consider using a whole different machine for your photo's and other important stuff. Never surf with your "good stuff"
machine.

It's been a while since your last update. I hope you both are okay.

Aaaawwwwww - so glad someone 'misses' us! I know it's been a while. There's just not too much to talk about while we're still sitting still ... and working ... and partying ... and dealing with computers ... y'know, such mundane stuff. We'll be hitting the road soon. I can't wait!