Gill and Gabi invited us over for dinner, and I want you to meet them. I find it heartening to know that the melting pot of America is cooking along just fine. I met Gill (Gilberto) because he works at a client of mine. I did a Microsoft Access database project for them, and Gill is the onsite computer guy who managed the database on a day to day basis. We communicated a lot over the past year via instant messenger and, with remote control software, I could log into his computer and make any changes to the database that he needed done. It was actually easier to get the work done when I was 2000 miles away than when I was living here because I didn't feel the need to get in the car and travel to his place. I would use the remote software and have the change completed within 20 minutes. Anyway, when we were somewhere in Utah, I believe, Gill IM'd me to give the great news that his wife, Gabi (Gabrielle) was pregnant. They were SO happy, and they were going to move into a bigger place, and we would have to come over for dinner when we were in S Florida. ... So, we did. Gill used a tripod to snap this photo of the 4 of us with his camera ... the same make and model as mine! A Cannon Digital Rebel - the boy's got good taste. 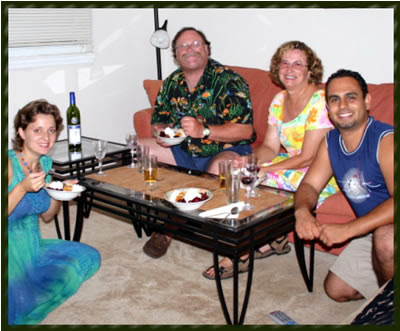 I just love their story. Gill grew up in Venezuela. His family moved here 11 years ago. He plays piano and guitar. He sings beautifully. And he used to make his living playing at a local restaurant. Gabi was born in Czech Republic, grew up in Germany, and was just here on vacation 6 or so years ago, when she happened to eat dinner in Gill's restaurant. She claims it was love at first sight, they spent the rest of the night walking on the beach, but she had to go back to Germany the *next* day! Well, as all modern love stories go ... they kept in touch via email. (They tell me they kept those hundreds of emails and have them printed in a notebook somewhere!) Even the emails stopped after a while and they lost touch for 3 years. Then Gill sent one more email ... she responded. She visited here, he visited there. He waited for her to finish her University degree in Germany, then she moved here and they got married in Miami. This summer they had a second, traditional wedding in Czech Republic with all their families. What a beautiful video they showed us! I'd love to visit there someday. It would be tough to drive our motorhome over ... though I know of people who put their motorhomes on a boat to be able to use them in Europe ... hmmm, that's a thought. Gill will finish his degree in Civil Engineering from University of Miami this fall. He got his American citizenship last year - just in time for the election! They are still in process of moving, and waiting for the baby to arrive in December. I think Jim and I smile a lot, but they have us beat. We were just blinded by the radiance of these two! 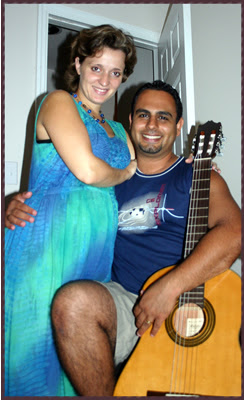 Thanx so much, Gill and Gabi, for having us over to dinner. And, where can we get some of that wonderful Czech mustard?
Posted by Chris Guld at 8/05/2005

What a "HEART-WARMING" story--thanks for sharing it with your faithful readers. Life sure is slowing down for you Chris--now that you are PARKED for awhile. Ain't it time to HIT the road again? Or have you just decided to WINTER in Florida?

I still say "it's over" and Odie's Roadies is house hunting....

Such a shame, I sure did enjoy thier travels......