A Forced Break - No Internet

We thought we'd hang around the rally fairgrounds for at least one day as we recuperated and wound down from a very busy week, but it was not to be.  The electricity was turned off around 10am - a sure sign that we were being asked to leave!
We turned on the generator so we could take care of the necessary things, but slowly got ready to hit the road and head back south.  Our next 'gig' is at a computer club in Sarasota, Florida.  It is apparently still winter and Florida is the place we want to be!
So, we headed south, not knowing where we would get to the first night.  I studied the Allstays App for a spot somewhere around the Gainesville area and Ginnie Springs jumped out at me.  Jim and I have been scuba diving in those gin-clear springs and knew it to be a very special forested campground as well.  We've never been able to stay with the RV before because they don't allow pets.  We've been sadly pet-less for about a year now ... there are a few advantages.
Now this is what most people have in mind when they say "campground." 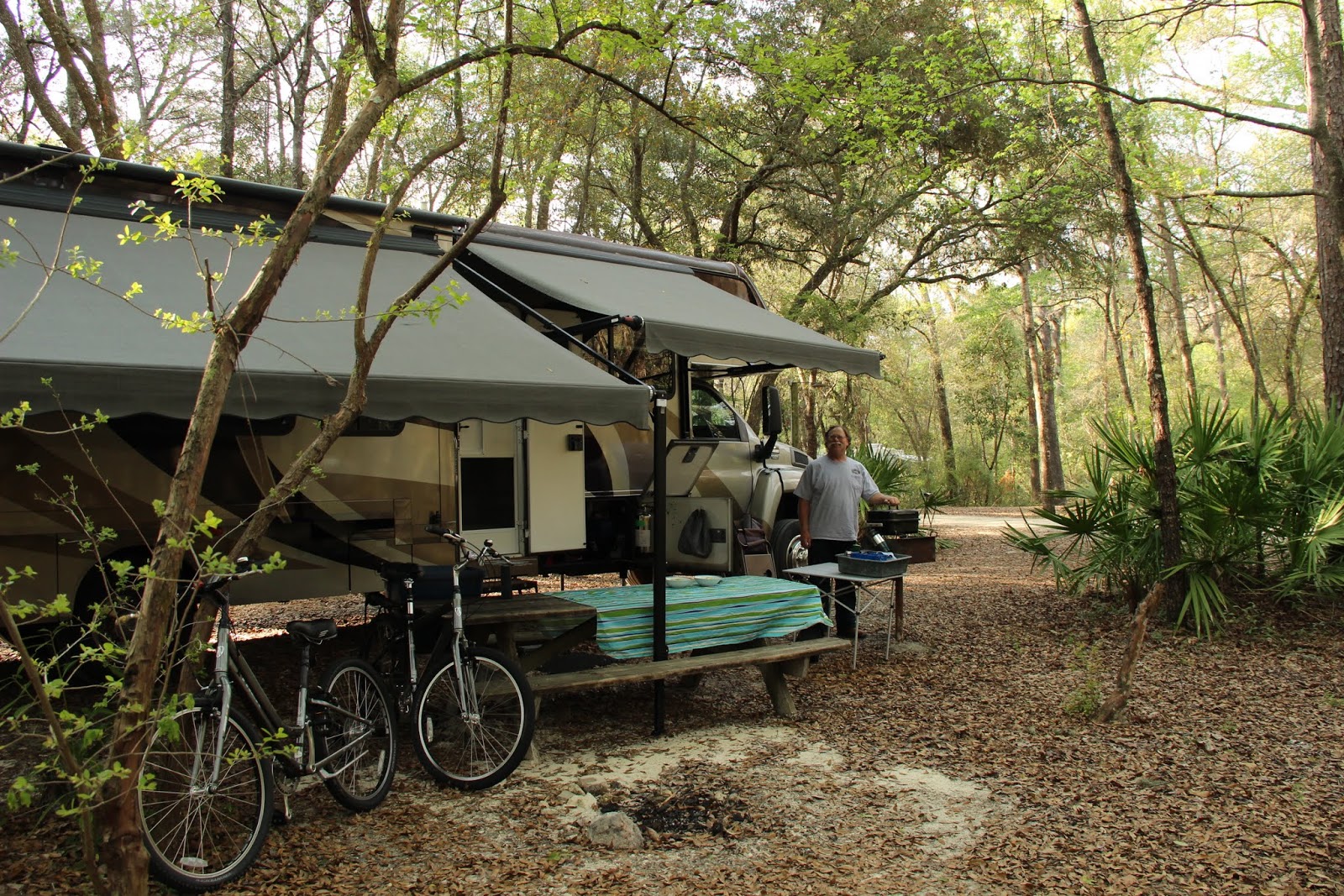 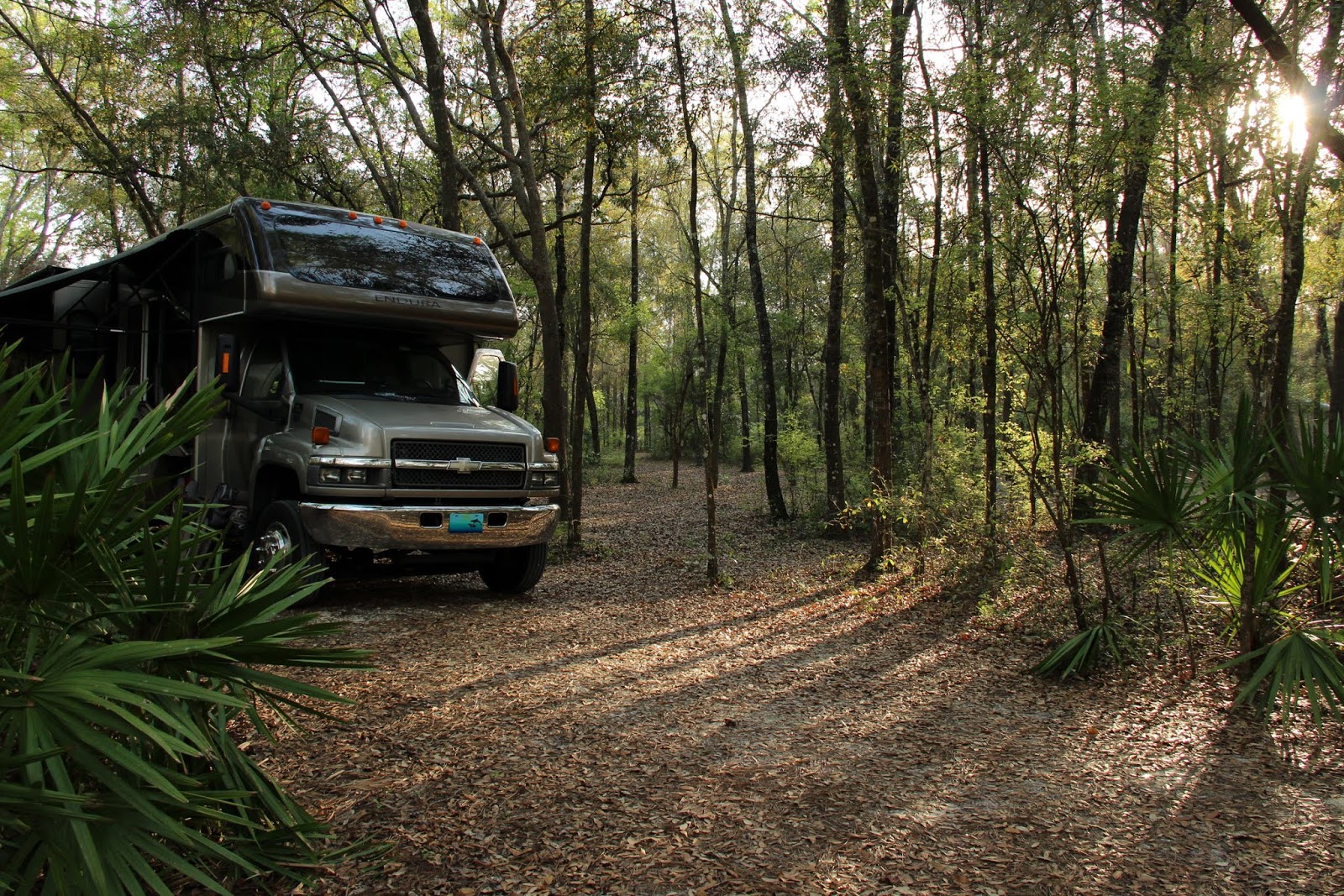 Such a pretty place, and the birds have the most beautiful voices!  Jim got right to work setting up a homey camp, with a table cloth on the picnic table, the awnings out and the grill ready to receive dinner fixin's.  I sat down at the computer and was very disappointed.  Our Verizon phones which normally provide Internet to our computers would bounce back and forth between one bar of 3 or 4G and a 1X signal, or simply NO signal at all.  I tried our iPad with it's AT&T service and found the same lack of connection.  I got out our Wilson "Sleek" 3G booster and it didn't help either.  We walked up to the office where there was supposed to be Wi-Fi and had not much more luck there.
OMG ... what do we do?? 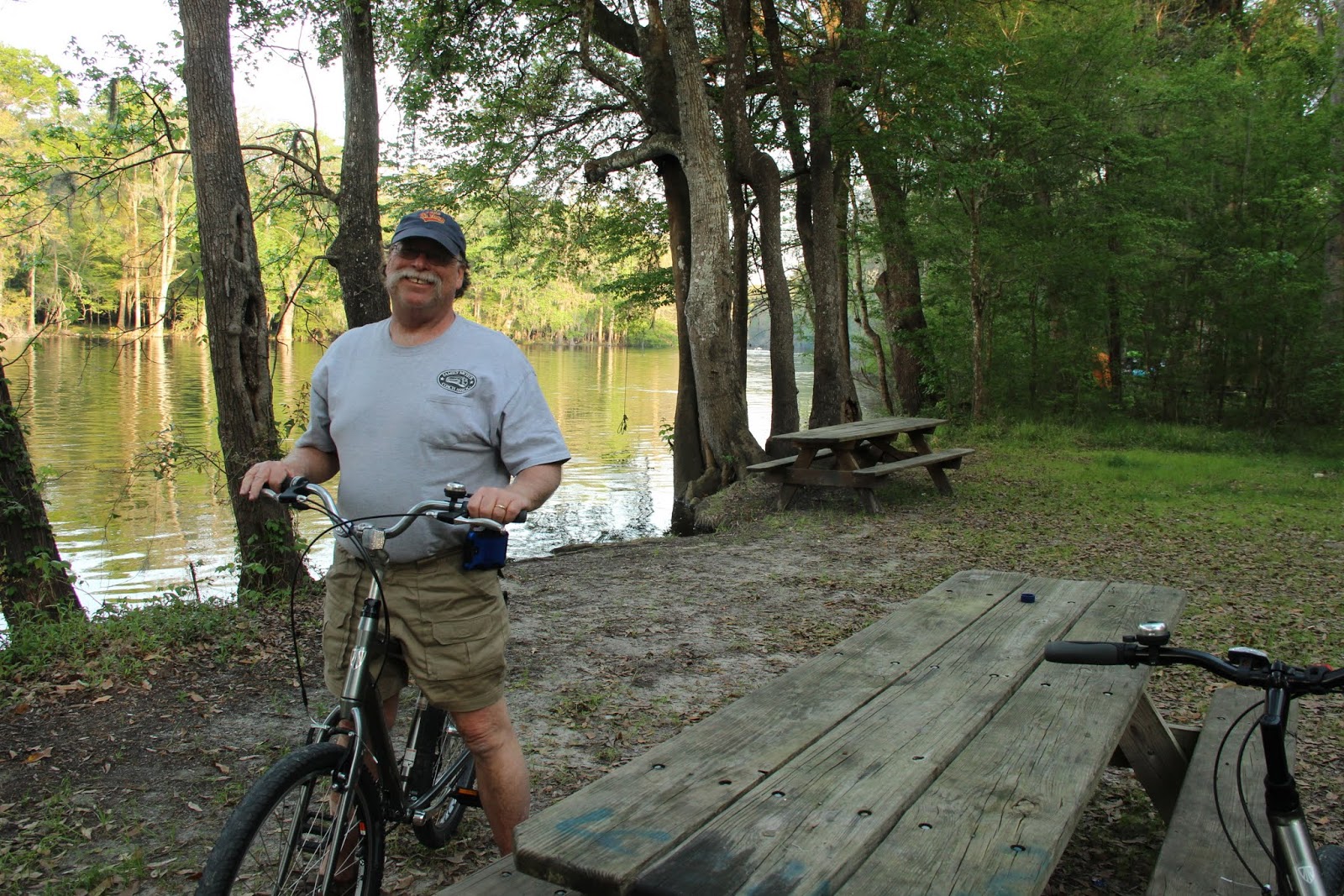 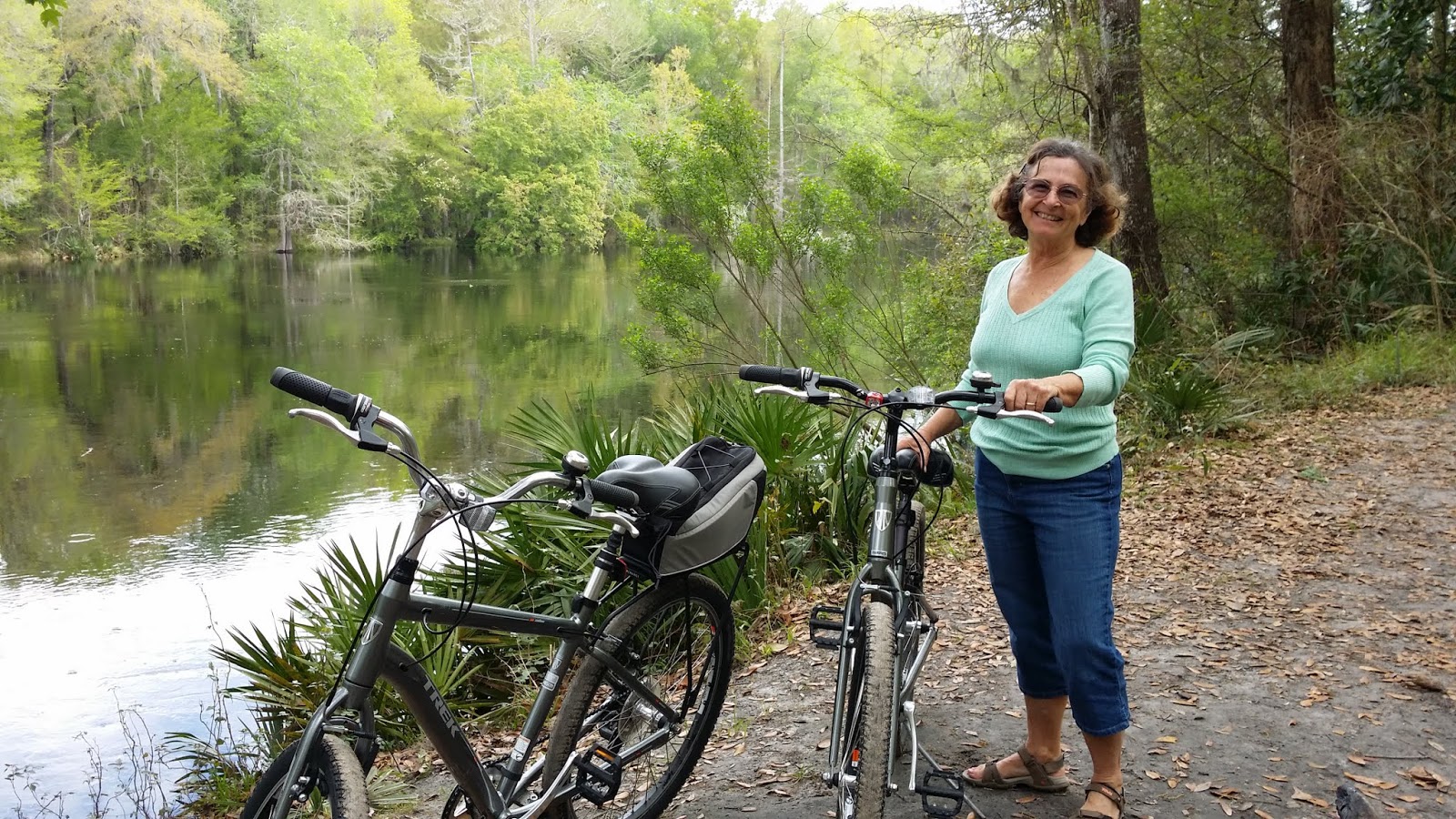 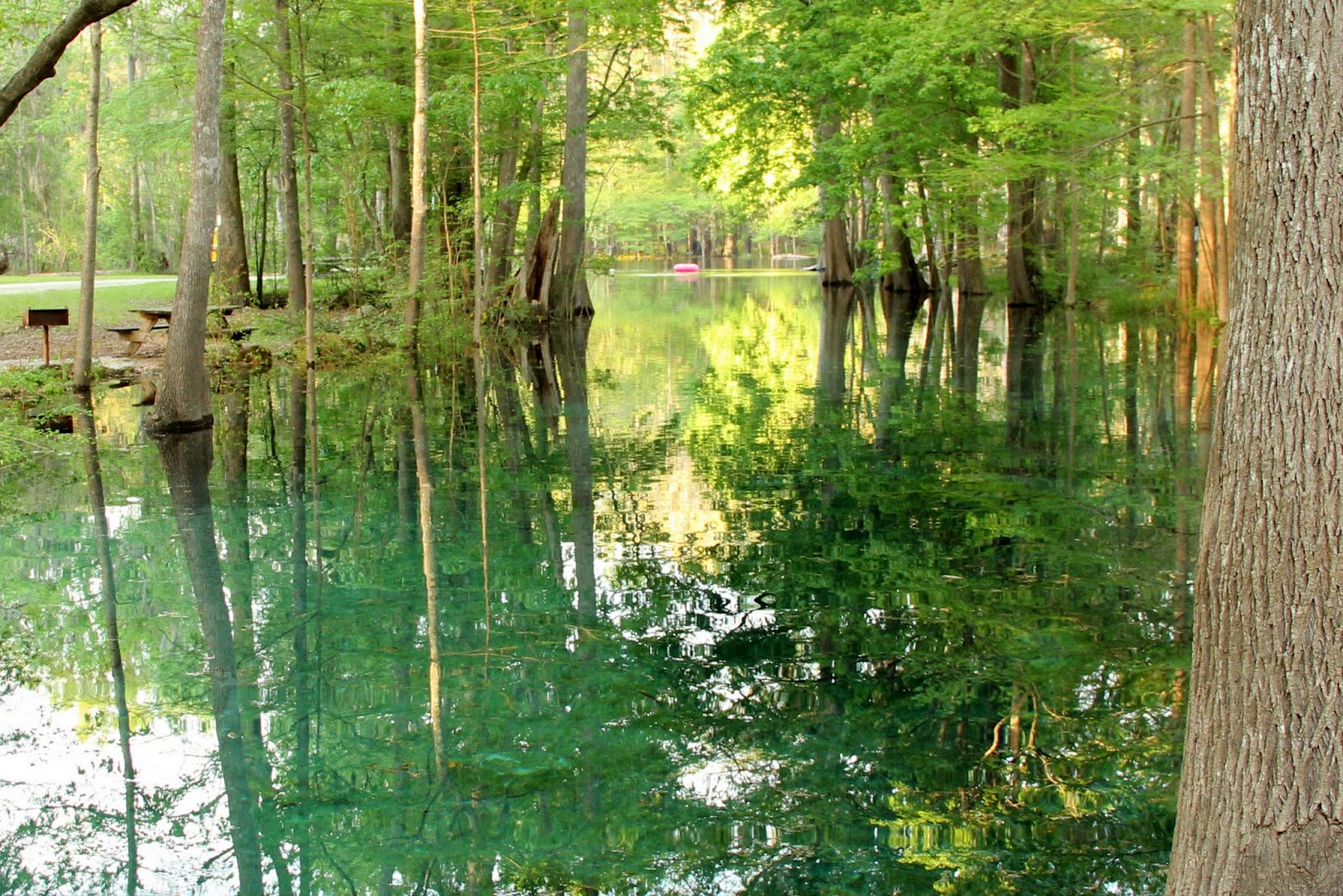 It is a beautiful place for a bike ride!  Lots of people were swimming and scuba diving in the springs, but we thought it was still a bit nippy for that.  I finished one book (Coast to Coast with a Cat and a Ghost) and started another (Going Home with a Cat and a Ghost) that I had already downloaded to my phone's Kindle App.  I did the download while we were on the road, just in case we were going somewhere with no Internet.  I really like reading on my Droid phone - it's so easy to hold in one hand, it lights up to read in bed and I can even turn the page using just one hand.

It was actually quite a delightful, peaceful 2-night stay.  But, after 2 nights, we really MUST have Internet!  So, it's off to Orlando and the Thousand Trails park there.  Good Internet, great hot tub, near Disney World where we have season passes, and best of all it's FREE.  Well, "Free" isn't quite the right word ... pre-paid maybe describes it better.  We have a membership in Thousand Trails and we pay roughly $500/year maintenance - then when we pull into a park to stay for a while, we don't pay any more.  It's home! Merrily and I also got our SCUBA certifications in Jinny Springs in 1992 (garwsh! it feels weird to type 1994).

There is a great little springs called Salt Springs in the Ocala National Forest. Great full hookup campground with well managed spacious sites. It's on FL -19 about 35 miles east of Ocala. The county rd 314 is a good shortcut and FL-19 goes on into Palatka and then on to I-95 south of St Augustine.

We just parked for 12 days in a Mississippi state park with no sat TV and limited phone and internet service and two channels on the TV antenna. We need some media overload to readjust.

Sometimes it's just good for the soul to unplug. It looks like you enjoyed your little respite.