First Look at the New RV

That was the exciting part.  Then came the paperwork and money ... that's a scary part, but we already had that all worked out ahead of time.  We'll have $900/mo payments for 8 years.  That will hurt, but we always seem to break even no matter what we do - so, I figure we will be earning at least $900/more from now on!

Then came the moving part.  OMG, did I freak out.  We knew that the new one didn't have as much storage as the old, but you just can't describe the feeling of carrying your stuff and not finding any place to put it!  There is only one cupboard in the kitchen, just enough for our 4 plates, 6 glasses, and four bowls.  So, we put the pots and pans in the cupboard over the couch. 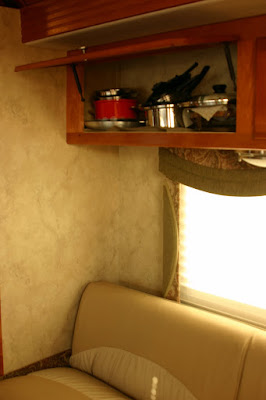 In the bedroom, I see *no* place for a dirty clothes hamper.  In the old rig, we just had it stuck on the floor in a corner.  In the new rig that little corner of floor disappears when the slide is pulled in for driving.

But, the lack of space for our stuff was only half of my meltdown.  As I sat at the dining room table at my computer, I looked across all the open space to the kitchen and into the living room.  That luxury just doesn't seem appropriate.  I'm not worthy!  What good is empty space?  I've always been a believer in trusting your gut feelings, and my gut was *screaming* "This is so wrong!"  This kind of beauty and space is meant for a different type of RVer ... not for us.  We pride ourselves on making do with a little, of being able to stretch out our arms and almost touch the wall on either side.  How can we ever feel at home in this?!

I considered holding my feelings inside ... we've made our decision, we really can't go back to the old RV - it is old and worn out, and we're not prepared work on it.  But, I just couldn't swallow hard enough, I had to let it out.  I called Jim in and I told him how I was feeling.  He listened.  I was prepared to take our paperwork back in to the sales office and ask them for our money back.  But, I had a suspicion that my emotions were unreasonable (yes, it does happen!  Just ask Jim.)  This has been a very emotional season for me, certainly enhanced simply by being a 58 year old woman.  I recognize that the burning in the pit of my stomach may simply be hormones (or lack thereof) stoking the flame.  So I waited for what Jim had to say.

He likes it.  A lot.  He says we can make it work for our stuff.  It'll be problematic for a while, but when we get some time to make alterations, it will be good.  I believe him.  He's good at that.
I took a deep breath.  Jim suggested that, instead of going out to dinner as we had planned, let's just stick a Lean Cuisine in the microwave and eat in our new rig.  Good idea.  We sat in the easy chairs and used the little end table that slides out of its holder in between the two chairs for our plates.  It worked well. 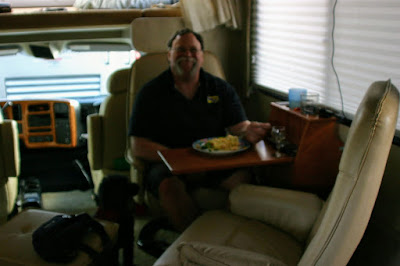 We brainstormed about how to make a top for the little table that extended it just a bit.  Oooh, fun.  As I took more deep breaths, I realized how much easier deep breathing was when I'm not sitting at my computer desk to eat my dinner.  I was looking across an open space at the couch.  I realized that, in this space we could actually have visitors!  And, there is a completely separate space in the middle of the coach that will be the office.  I will be able to get computer work done, while Jim is doing something else!  In the old rig, we kinda had to be on the same wavelength in order to accomplish anything.  The small space dictated that.

I started to get excited.  Whew!

Ok, I'll get back to moving now.  Here's how the old/new rigs are parked to make moving easy. 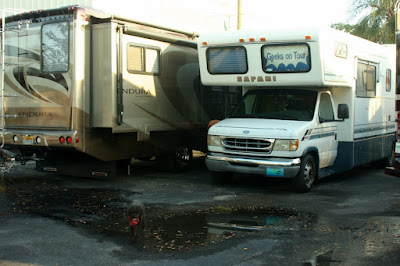 Change is always hard, even if it's a good change. Just let those tears flow, you'll feel better. I'm sure you'll come to love your new rig just as much as you loved the old one!

I tell people that when you get a new computer there's always a painful period. That's small compared to changing homes. Yes, you will come to love that open space. Now that you've made so many friends all over the place, you NEED a place to sit and visit when it's too windy, rainy or cold outside. You've also got just the right kind of man to help you get through this transition!! I agree that you need to let those tears out....(for several issues) A year from now you'll be able to read this post and smile as you are enjoying your new, well-deserved home.

A meltdown is normal -Thats what husbands are for to vent. but now you'll have the fun of designing a new MH just the way you want it and your experience with the safari will help.
We are still changing ours - throwing things our and adding new. forever reorganizing.
Just remember change is good!
Looks like Odie approves. Has your mom seen it? Enjoy

It is so beautiful and spacious!!! You'll make it work. How much to put it on the ship and come to visit us on island? :)

I don't know about the rest of you but it looks to me like they could park the old rig inside the new one and still have lots of room left..

Great looking new rig.. I hope there is a place for Mom in there...but I'm sure there is.
I wish you miles and miles of care free enjoyment with your new home on wheels..

We lived for 2 years with an inconvenient and uncomfortable setup in our MH. Suddenly, one day I realized we could change it! Yes, take time for your meltdown... then look around, figure out how to change the interior to suit YOU, and have fun! Isn't it funny how change - even a change we see as good, a change we plan for and hope for - can bring such angst? (Well, maybe FUNNY isn't the right word!) Hang in there and soon you will be writing a post devoted to all the things your LOVE about your new rig!

The "what have I done??!" thoughts are totally normal. Do not be alarmed....let them pass naturally and all will be well. Before you know it, it'll feel like home!
Nina

First of all congratulations on your new rig - it looks gorgeous and with a few changes it will be fabulous. I remember when Allan and I purchased our new motorhome Allan and I lay in bed that night and asked the question "did we do the right thing?" Well the answer was a tentative yes and now it is no question YES we made the right decision. Let us know when you get to that point. Have fun planning the changes.

Quite normal to be sad as you move to your new home. The memories you made in the old home come rushing forth. Embrace them and know you will be making new memories in your wonderful new home. YEA !! so happy for you.

You are allowed to cry, you are human, after all (we're not always sure about Jim, though! ;c) ).

You are very creative people and in no time you'll be having a ball making your new RV fit you like a glove.

All the best with your new home.

Chris, you know how big our rig is and my laundry hamper is stored in the shower and my pots/pans are over the sofa. LOL!!!

We have felt your pain. When we went from the 38 (that we lived part time in) our friends and strangers did a lot of snickering. Of course while trying to fit everything in it started to rain, a lot. Just before we were ready to fall into bed we found a rather large geyser in the front slide out...
What a night! The sun really did shine the next day, they found and fixed the leak. We realized that we didn't really need all that stuff, just most of it!
As in most cases, we did survive and are still very happily married.......

Chris and Jim,
I know that a lot of banks are not giving loans to full timers, Bank of America is not. Who and how did you get your loan? We are full timers with a previous loan from BAC and they would not refinance us at a lower rate because we are full timers.

I've changed rigs a couple of times, and it seems like your stuff NEVER fits in to the new rig, even if it's bigger. But after a while the stuff "settles" and all is well. Amazing!

This comment is coming from a full-timer, married to a man who has done literally hundreds of household moves as a professional. So it probably was easier for us to move than most. Even so,I totally feel your pain, Chris. Change is always difficult - but moving is excruciating. And if you hadn't had at least one tearful meltdown, I would be worried about you! I hope you enjoy your new rig immensely!

I feel your pain. We went from a 23 foot with no slide to a 28 foot with a big slide and had way less storage, including 2 cubic feet less in the refrigerator. Nothing would fit in the old spot. B J

Even birds have to build new nests every so many years. You guys deserve the new digs. And Odie certainly approves, so just deep breathe and enjoy it. Change is good and gets harder the older we get. Happy trails.

Your new RV looks warm and cozy. Oooh, such an adorable pooch you have! Great job with the door to door plank. How's the journey going? There's nothing like exploring the county in a motor home as lovely as yours.

Lots of people share a common feeling every time they move out. But that’s life—we live in one shell, then look for another the next. But it’s okay, as there will always be a comparison between the old one and the new one. But since it’s been more than a year now, I think you got use to it now, right?