Damn! How time is speeding by. With no travel to delineate time by location, I have no frame of reference. Just all of a sudden it's the end of the week. We did our YouTube show on Sunday, so that means that Saturday was preparing, Sunday was delivering, and Monday/Tuesday was writing notes and recapping. We also did our "Backstage" zoom meeting with Geeks on Tour members after the show. These are so cool. Our episode was back to basics with Google Photos. We had over 200 viewers at one point during the live show - that's a record for us. And, within 4 hours, the video had over 1,000 views. That's really a record. I still wonder if there was some kind of anomaly in that count. We usually have 300 or so in that amount of time, and many of our shows only have 400 views even a week later. I know Google Photos is popular, but ?? Here is Episode 191 on YouTube.
I love guacamole, and the avocados that Jim got from the Walmart order were perfect by Monday and Tuesday. And, the one thing we will always go to Walmart for is chips. Their hint of lime chips are the best. What a treat. 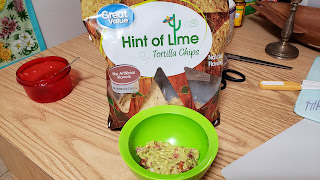 That's about it for the week. We've gone for our walk around the neighborhood most every day. We've also had a Zoom meeting just about every day, and I'm continuing to make progress on my Google Photos book. I'm especially excited about coming up with a strategy for adding videos and other dynamic info to the book. I'm making a Google Photos album for each chapter. The album will contain tutorial videos and text slides. Using Google Photos to teach Google Photos! Brilliant.

Loved this story from NPR about how well different types of people got along when they were forced to be together at Hotel Corona Rough Translation NPR
And, you gotta check out this way of virtual travel. Control where you go virtually in Farrell islands tourism
Posted by Chris Guld at 5/21/2020

Email ThisBlogThis!Share to TwitterShare to FacebookShare to Pinterest
Labels: #stayhome