We are still very content staying home. We walk around the neighborhood for exercise, and I hike up and down the stairs when my fitbit buzzes at me to move.
My Book
I'm working diligently on my Google Photos book. I hit a roadblock one day. The one where I think I can't do this, there's too much, it's too hard, I'll never get it done, I should write better, who am I to write this book, I should give up and wait for someone else to do it. But I persevered, first I took the evening off and drank more wine 🍷, the next day I kept my nose to the grindstone and succeeded at not drinking any wine, just to prove I could, and I focused on just one chapter - the Sharing chapter.
I think this will be a good book.
Food
I am so lucky that I live in the best restaurant in town. Jim is still making delicious, healthy meals every day. In addition to being a computer geek, he is a cooking geek. He uses a Sous Vide to cook the steak. That's a device where you seal the steak in a plastic bag and immerse it in water. The Sous Vide device gets the water to the specified heat and you program it for the proper temperature to make the steak rare, medium, well-done - however you like it. It cooks the steak perfectly, through and through. Not rare in the middle and well-done on the outside. It takes a bit of time because it's low and slow, a couple hours maybe, but it's no work - he sets it and forgets it till it dings that it's done. Then he takes it out to his Kamado Joe grill with special charred wood instead of charcoal to finish it off. He also has an Instant Pot, and an Air Fryer, but they weren't used for this meal. 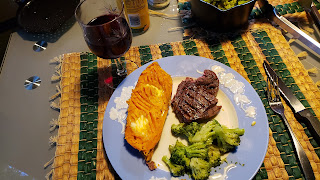 We did give Jim a break one day, we broke down and ordered pizza online, oops Jim slipped and clicked on the chocolate lava cake as well. The Dominos website shows you when the pizza goes into the oven, when it comes out, and when it's in the car for delivery. We ordered at 5:42 and it was promised by 6pm. That seems awfully fast. We figured it would probably be more like one hour. Jim started getting irritable when we passed the hour point and still hadn't heard anything. It was delivered at 6:50, and it wasn't very hot. But, the air fryer fixed that. I think Jim prefers to cook instead of going thru the aggravation. I do like the thin and crispy crust Pacific Veggie pizza though. I didn't like the chocolate lava cake at all. 😋
Space Launch
For being stuck at home and having nothing going on in our lives, it was amazing how exhausted I felt by the end of the day Saturday with all that was going on in the news. First - the good stuff - Spacex and Nasa's first manned rocket launch in over 9 years. It was so emotional - both Jim and I were crying as we watched that massive rocket rise up above the flame, take to the sky ... and make it. Then the unimaginable feat of the Rocket coming back to earth and sticking the landing on a drone ship named "Of course I still love you".
Memories flooded thru me. I remember being a 10 year old girl huddled around the TV with my parents in 1962 as the United States launched a man into orbit, then again in 1969 when we put a man on the moon. The wonder of it all, the feeling of invincibility, the proud knowledge that I lived in a country that could do this! Also the memory, in 1983, huddled around a TV at work to watch the Challenger launch with a teacher on board, and the horror of watching it blow up. My last space launch memory is in 1998 when Jim and I went to Cape Canaveral with our friends Chris and Richard to watch John Glenn go back into space on STS-95 when he was 77 years old. It was another tear-filled moment as we watched the rocket lift, then waited a few seconds to hear, and feel, the thunderous roaring sound. Our hearts were in our throats with the fear of seeing it blow up, then exuberation as it made it to orbit perfectly.
All of these feelings combined as we watched the launch on TV this Saturday. Jim and I cried and cheered and poured some champagne.
Then ...
then ... with the TV still on, we started watching news of the riots in the streets protesting the murder of George Floyd in Minneapolis. The video, played over and over again, of a police officer kneeling on Mr. Floyd's neck as he says, "I can't breathe." Reports say that the officer kept kneeling on his neck even after he became non-responsive. What? How is that possible? If it was necessary to take such extreme measures to subdue someone (and by all reports it was not) wouldn't any normal person be poised to let go as soon as possible? Reports are that the officer kept kneeling on him for nearly 3 minutes after he became non-responsive. 3 minutes is an eternity. How is that not cold-blooded murder?
Then the protests began in Minneapolis, at first peaceful, then turning ugly, breaking windows, setting cars on fire. So horrible. Then came New York, Chicago, Los Angeles. Wow, this is historic. It's encouraging to see that many, if not most of the protesters are white. Could it be possible that this is a turning point in the country's history? We're on such a razor's edge though. Seeing protesters turn angry and facing rows of police with full military weapons, how does it not turn into a war? On the TV Saturday, the coverage was on protests in Miami. Crowds started at the Friendship tower downtown and walked thru the streets toward I-95. Then they streamed onto I-95 (the primary freeway in S Florida) and stopped traffic. What a sight. Many people in their cars, rather than being upset and trying to get through, got out of their cars and joined the protesters. Another very emotional sight. All very peaceful as far as we could see.
Bad News
5/27 Wednesday US Cases 1.73 million Deaths 102,000
5/28 Thursday US Cases 1.76 million Deaths 102,379
5/29 Friday US cases 1.78 million Deaths 104,000
5/30 Saturday US cases 1.81 Deaths: 105,000
More bad news: Riots in Minneapolis after police murder a black man: 'A riot is the language of the unheard': MLK's powerful quote resonates amid George Floyd protests
Good news
We have liftoff! Heart-stopping, Tear-jerking liftoff. And, even better was that the reusable Dragon Rocket stuck the landing on the drone barge.