We love visiting Presidential museums, they are the perfect combination of history and biography - my two favorite things to learn about, besides computers that is! So, when we were told that Herbert Hoover's museum is in Iowa not too far from our route ... we had to go. This is our 8th presidential museum. You can see all our blogposts about them by clicking on 'Posts About ... Presidential Libraries' in the right sidebar.

btw - I'm sure glad I'm writing this rather than speaking ... I find it almost impossible to speak 'herbert hoover' without getting tongue tied or dyslexic and coming out with herver hoobert or something :-) Just try it ... say Herbert Hoover 3 times fast! 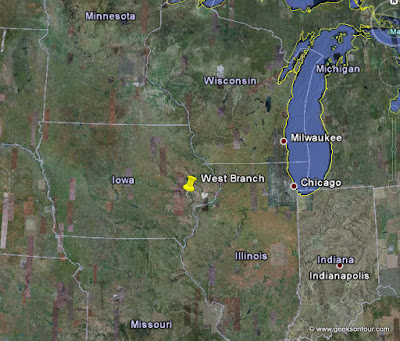 What a pretty little town.

The little white house in this next photo is Herbert Hoover's actual birthplace. It's been restored, but it is the actual building in it's original location since 1874 when he was born. Hoover was a Quaker and we had a great tour guide who made us experience the Friends Meeting house the way the Quakers would have ... in silent meditation. She told us that Quakers believed that we all have a light within and the purpose of Sunday services was not to listen to a preacher talking about God, but to sit in silent meditation and find our God within. So we sat on the benches .. Jim on the men's side and Helen (the park ranger/tour guide) and I on the women's .. for a moment of silent meditation and then she continued the tour. That was great - thanks Helen! I didn't know I was a Quaker!?

I was fascinated with Hoover's biography.

What a full life! And full of such huge ups and downs.

The museum also had an exhibit about Iowa A-Z which I thoroughly enjoyed. Who woulda thunk there'd be so much interesting stuff in Iowa! I could have spent a lot more time in that museum (I always say that) but Jim reminded me that the Lincoln museum in Springfield is next on our agenda and we'd better get going.

meanwhile, I need to take a 'work' day. I need to get our newsletter out in time to remind folks that our $29 special on new and renewing memberships is over on the last day of June. I also have lots of new 'show-me-how' computer videos I want to make, but that can wait till we get to Indian Lakes Thousand Trails where we'll stay for 2 weeks of catch-up before heading to Bowling Green, Ohio for the next FMCA convention where we'll be presenting 7 different seminars plus our hands-on Boot Camp during the evenings. See why we need to rest up? For our complete schedule see our website.