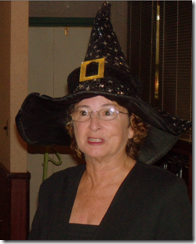 There’s not a whole lot of trick or treating that goes on in most RV parks, but we did have one.  The manager’s daughter, Marie, came to our door dressed as a black cat. Instead of saying trick or treat, she said ‘Meoooooww’.  Jim gave her some candy while I put on my witch’s hat and answered with my best cackling, “I’ll get you my pretty.”

That was the second time I had the opportunity to wear my witch had that we bought at the Salem Witch museum this summer.  The first was our Toastmasters meeting on Thursday, and Jim took a picture.

We’ve belonged to this Toastmasters club since the 90s and it has a history of getting dressed up for Halloween.  I found this pictures from 2001.  Yes, I promise that is me and Jim.  Who else do you know who would dress up as Dilbert?! 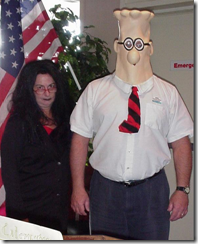 Hope you had a great Halloween.  And don’t forget to turn your clock back for daylight savings time.  That means we’re getting an early start to go diving today!  Jim’s been out kayak diving a couple times already, but this is the first time for me.  And, it’s a beautiful day.