We are back at Palm Creek again helping people with their WiFi connection. When Jim visits people, he takes his laptop computer with him. That way he can try to connect with his computer before spending too much time looking at their computer. If his computer can't connect, then there's something wrong with the location. If his computer can connect fine, but their's can't, he starts checking out their adapter's power, their computer's configuration etc. etc. I've written a long list of things we check here. There are way too many people here for Jim to help them all, so I make lots of user visits as well. Problem is, I don't have a laptop to take along. The user's computer is all I have to work with. 90% of the time, the problem is that the user does not have a good enough adapter. So many computers are sold by saying they are 'Wireless Ready'. They have a WiFi adapter built-in. People think this should work in an RV park hotspot. It doesn't (unless you're really close to the source). You need something better than what is built-in to most computers. See my previous post about adapters here. Or people buy a card type adapter. Most of those aren't good enough either. I have found that taking a Wireless Ethernet Bridge along with me on my visits is almost as good as taking Jim's laptop. I simply plug the bridge into the user's ethernet port, disable their adapter, and they're on! I LOVE my Wireless Ethernet Bridge ... it just WORKS. I first learned that this was the best way to connect when we did some experimenting with an outdoor antenna - read that post here. So, what IS a wireless ethernet bridge? Let me start with a picture: 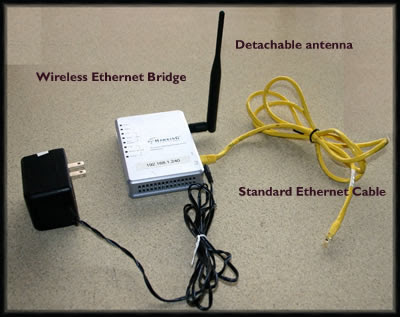 This is the one I take around with me. I need to find a power outlet to plug the bridge into, then I plug the ethernet cable into the user's computer's ethernet port (95% of all computers have an ethernet port - it looks just like the phone jack but just a little bigger). There is nothing to install, nothing to configure on the user's computer. As soon as the ethernet cable is plugged in, the computer *thinks* it is connected to a wired network. The computer doesn't even know that wireless is involved at all. And that's a good thing! Wireless Internet hotspots are still very new technology - and, from our experience, very few computers are naturally good at it. The Sony Vaio (what Jim has) is one notable exception. However, cabled/ethernet networks have been around for a long time. Not only does your current computer have a natural understanding of ethernet-based networks, it's father and it's father's father knew how to work with ethernet! It's the bridge that takes care of wireless part, and it was born to work with wireless. So, why don't we recommend wireless ethernet bridges to everyone using WiFi hotspots? Because they're hard to set up. For one thing, the name (ssid) of the WiFi hotspot has to be programmed into the bridge. So, every time you travel to a different location you have to reconfigure the bridge. It's not really *that* hard, but you have to be comfortable with things like IP addresses, and ad hoc vs. infrastructure mode, and SSID's. And, sorry if I offend anyone, *but* many RVers are computer beginners, they have trouble with basic computer operations. We don't want to be responsible for their heart attack when we tell them they have to configure a piece of hardware at every new hotspot. One user, when told that a 'config' file needed modification said, "Why do I want figs with my computer?". Another reason we shy away from recommending them is that they don't show you things like signal strength and speed and available wireless networks like normal wireless adapters. Remember, the computer thinks it is connected to a wired network at 100Mbps. And, that's all it shows you.

This makes it harder to troubleshoot what's wrong if you're not getting a connection. BUT, if you're willing to learn a little, and get involved with IP addresses and settings. The bridge is a great way to go. Besides the fact that it simply works good, another reason is that an ethernet cable can be as long as you want without degrading your connection. USB cables are limited to about 15 ft and antenna cable is also limited - the shorter the better. So, if you want to have your computer in the rear of the coach and the best place for the antenna is in the front, the bridge is the only way to go. Oh yeah - one more reason. It works with Macintosh! I always worry when I have to visit a Macintosh user because I know so little about them. I visited one just yesterday ... plugged the wireless ethernet bridge in - disabled his internal airport, and Voila!, he was surfing the web. Read more about wireless ethernet bridges: Motorola Linksys Hawking or just google for wireless ethernet bridge!
Posted by Chris Guld at 1/07/2006

What is the brand of bridge that you use?

The one in the photo that I use is the Hawking. It looks a little different from the one you see if you follow the link just because it's older, they've changed the look. It's a HWBA54G.

excellent article... i was looking for a device like this but i didnt know it´s name

Austen, YES! this works with XBox. In fact, this is such a common use that bridges are also known as Gaming Adapters.

Thank you for your very informative post and site. Now I know what I need to buy to extend my network coverage in my home that's economical and easy to install after weeks of research!

Can anyone recommend the best Remote Desktop system for a small IT service company like mine? Does anyone use Kaseya.com or GFI.com? How do they compare to these guys I found recently: N-able N-central help desk software
? What is your best take in cost vs performance among those three? I need a good advice please... Thanks in advance!

Oh boy! Thanks for this article! I mean, really, I was actually looking for such a device. I think I'm gonna go for the Linksys though, as the last Hawking I've seen on their site is kinda bigger than the Linksys.

It might be useful for people to know that I plan on using this to get Wi-Fi for a computer without ANY kind of network card. I'm not sure it will work, but:

It's a 386SX 20 MHz laptop. To make things work, I'll have to wait until I can afford to pay someone to make a custom RAM card so I can get more than 2 MB of RAM on it. Of course, the RAM card was proprietary and of course you can't find one anywhere.

It has a parallel port and a serial port. I managed to get one external Ethernet card for the parallel port (thank God for Ebay!) and apparently I'll be able to have wireless networking on it as well, thanks to this device. The only drawback would be that it needs an external power supply, but then again, so does the parallel port Ethernet card. It's not such a big problem in a car, though.

I currently use a wireless ethernet bridge (Z-com) or, depending on the hotspot and wi-fi, a Cisco/Linksys. My problem is, I do medical transcription and the dictaphone has to be connected to a hard line, so I have a vonage line. So it goes, Ethernet bridge, vonage line, dictaphone (phone). The Vonage line can also connect the computer as a hard line as well. My question is, can an air card Hotspot' (Tried Sprint's 3G/4G card) be used to capture that signal with the ethernet bridge? I need to have a dependable signal where I go, so taking mine with me seems to be the best way to do that.