I need to say goodbye to Ron Morrison. He was a regular at Thousand Trails, Peace River - where we spent the winter last year. I received a couple of emails this week telling me he passed away. It was a shock, since I regularly read his blog , and there had been no mention of illness. No one seems to know exactly what happened, he was taken to the hospital on Saturday night and he was gone by Sunday. Ron was a character. I liked him. He always had a smile for us. He lived in an old blue bus that he operated on vegetable oil. 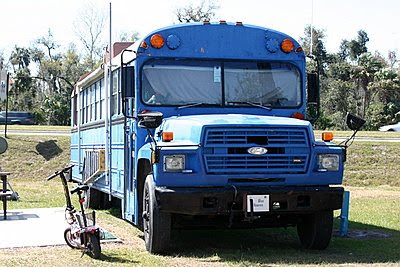 He didn't have much, but he didn't complain. This year he even got a job as a school bus driver in the town near the park. He was a star computer student. Already a good photographer, he created several PhotoStory slide shows after taking our class. He even told us that he got a couple paid gigs making slide shows for Weddings and other special events. And, of course, we taught him how to blog and he wrote regularly from February, 2007 to February 15, 2008.
And, my favorite personality trait ... he could laugh at himself. He writes in his blog that he bought these green velvet shorts with bells on them to play pickleball - in hopes that they would distract the opponents and he could win a game! 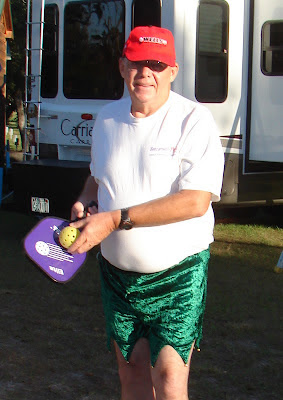 I keep looking at his blog expecting to see another post. It's weird. It makes me think that everyone who blogs should have a designated person who knows your username and password in case a Last Post needs to be made. Maybe it should become a standard clause in our Last Will and Testaments? Designate the person you want to write it, and specify the username and password? Even if I knew his username and password, I wouldn't feel right. I'm not family, and I didn't even know him very well. I guess I could put a comment on his last entry and link people to here.
Goodbye Ron! You touched our lives.
Further your computer education **Subscribe to the Free Geeks on Tour Newsletter**
Posted by Chris Guld at 3/07/2008

Email ThisBlogThis!Share to TwitterShare to FacebookShare to Pinterest
Labels: blogs

I'm so sorry to hear about Ron. I think you're right about needing to leave logins and passwords with a close friend or family member.

It's not just blogs, but it's the forums where we have forged friendships with those with similar interests.

I have often thought about this since there are several motorcycle forums that would truly wonder if I disappeared and quit posting.

I do think that with Blogger you can designate more than one person as an author. That might work.

Again, sorry to hear of his passing.

I'm sorry to hear of Ron's passing. I met him briefly on a quick weekend trip down to Peace River in FL. I liked his intrepidness in building that big blue bus with the vegatable oil fuel system. There should be more like him.

Chris, I know the feeling of loss that your are experiencing as I too have just suddenly lost a dear friend in our camping club. I believe that these events puts us closer to our own mortality and the feels that we would like to be able to say goodbye somehow and comfort those we are leaving behind.

What a nice tribute you have given Ron.

I never meet Ron. I'm sorry to hear of his passing. I enjoyed reading his blog and his photos were among the best.
Ron old Friend, you will be missed.