When we did computer training and support for a business in Fort Lauderdale, Florida, we were often known as 'computer heroes.' I remember one client said she was going to give me a cape to wear!

Well, I have my computer heroes too ... for different reasons ... and one is Elliott Masie. Back in the late 80's, early 90s, he organized a conference for computer training professionals called the 'Computer Training and Support Conference.' It was a great conference. I don't remember the numbers exactly, but I think there were usually 1 - 2,000 attendees from all over the country. I would attend as a participant and, in later years, as a presenter ... he called us 'faculty.' He knew how to make us (computer trainers) feel special. We were always very motivated after one of his conferences.

My memory quilt even has a couple patches from one of those conferences. It is a special memory. (note: Van Valkenburg was my last name then) 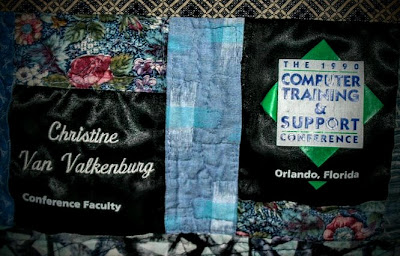 So, when I saw that we were planning to pass close to Saratoga Springs, the home of his 'Masie Center' I thought I'd drop in! We were lucky, both he and his wife Cathy were in and we got to spend a little bit of time chatting before we had to hit the road again. 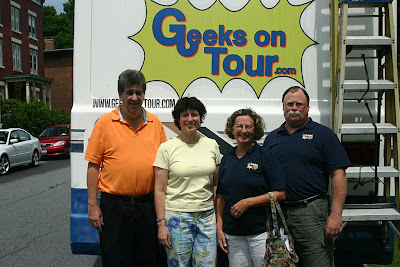 He's still in the business of furthering the role of training, but instead of concentrating on how to teach people to use computers, it's more about how to use computers to help people learn anything. It's always an interesting conversation whenever Elliott's involved. His current conference is simply called Learning. And, he produces an email newsletter called Learning Trends.

One thing that I love about our nomad lifestyle is the opportunities to connect, and re-connect, with people all over.

Thanks Elliott and Cathy! Hope to spend some more time in Saratoga someday. It looks like a nice place. Good luck with your horses!

Email ThisBlogThis!Share to TwitterShare to FacebookShare to Pinterest
Labels: people