“Hanging Out” in Massachusetts

We’re still here in Colorado, at the Clear Creek campground, but our Friend Bob Brown wanted us to give a little smartphone seminar for his Good Sam rally in Massachusetts.  We’ve done this before using Skype.  We’ve also tried using Google+ Hangouts.  We still can’t decide which system is best, but we did quite a bit of practice with our equipment using Hangouts this time.

In the picture below, you can see Jim with his Surface Pro tablet.  He’s connected to the Hangout with that computer.  The beauty of it is that it has a rear-facing camera.  That means, as he’s talking to the folks in Massachusetts, he can be showing them the Android phone, or the iPad screens by focusing his Surface’s camera on them. 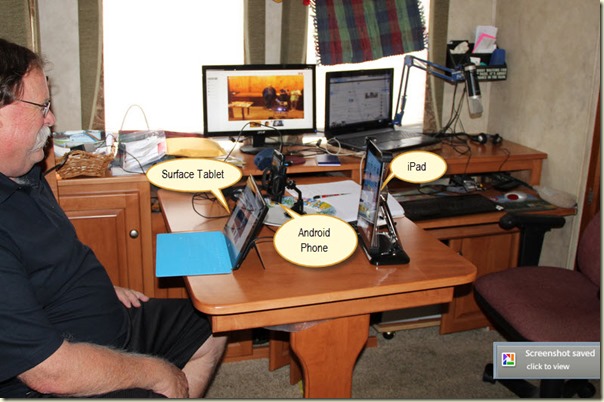 In the background, you see my computer with the big microphone, and the second, larger, monitor is displaying a view of the room in Massachusetts.

Unfortunately, they had thunderstorms in Massachusetts at the appointed time.  Severe weather wreaked havoc with their Wi-Fi connection.  They said that they could hear us OK, but we couldn’t hear them.  So, we called Bob on the phone and he relayed their questions.  Never Give Up!  Never Surrender!

It certainly wasn’t as good as our live seminars, but we covered some of the material anyway.  We finished early, and Bob told us that the Internet connection died completely as soon as we hung up.

We have two more remote seminars scheduled in the next month.  Wish us luck!

Thanks Chris & Jim we had a good time with the remote. Your feed to us was great. Also doing some research on better sound control. The remote location we used USB Camera with built in Mic on a Fiber optic USB extender. I need to seperate the mic and camera for better control @ the remote console.
We should tets drive Team View some night.