We are huge fans of Presidential museums.  We have made it a point to stop at them all over the country, and have managed to visit all 12 official Presidential museums.  See this past post for a list. There are also a few presidential historic sites we’ve visited that are not part of the official system of Libraries … Teddy Roosevelt Nat’l Park in N Dakota, Lincoln museum in Illinois, Whitehouse museum in Washington, D.C.  Whenever I write a blog post about any of these, I add a label for Presidential Libraries.  Clicking on that link will show all of those posts together. 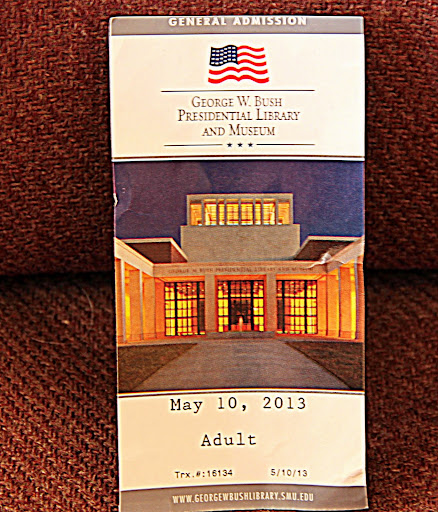 So, when we learned that the 13th official library had just opened, and it was on our route, we had to visit the George W Bush Presidential Museum in Dallas.  This is our third Presidential museum in Texas – Lyndon Johnson in Austin, George H.W. Bush in college station and now George W in Dallas! 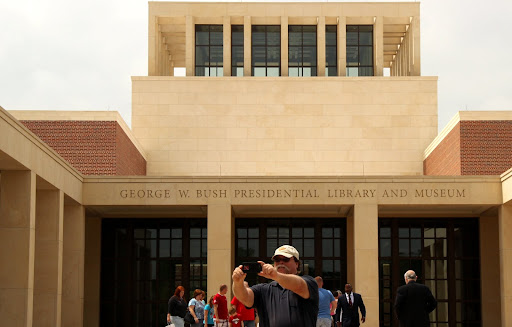 It was very strange to see ‘History’ displayed on events we have lived through – recently – and have our own recollections and opinions. 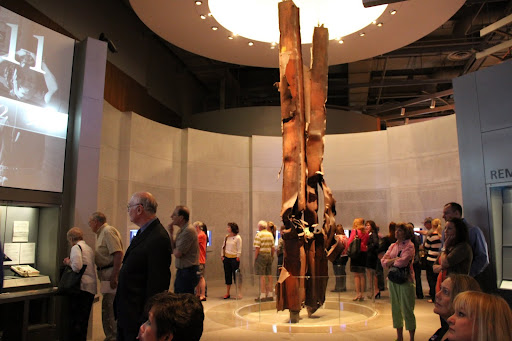 I usually really like seeing history summarized.  My brain is too full as it is and can’t hold much more, so just give me the soundbites!  But, when you see the decision to invade Iraq simplified to 3 choices (1.another UN resolution, 2.Lead an invasion 3.Do nothing) you know that history isn’t that simple, there was so much more going on.  More than anything, this experience makes me question everything I’ve learned about history – the facts are always as seen thru the eyes of the presenter, and the presenter with the biggest stage wins.

This Iraq scenario was one of the presentations in the ‘Decision Points Theatre.’ I loved the technology in the presentation, there were at least a dozen stations where the audience gets to vote on the decision, and the results are displayed on the big screen.  Then President Bush appears on the screen and explains his decision. 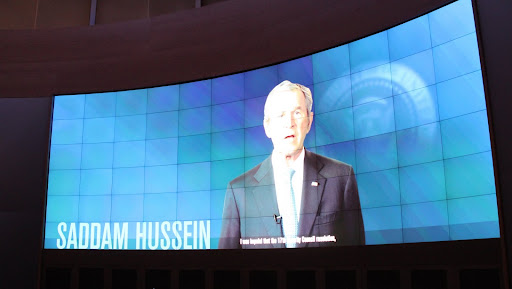 George W Bush tells the audience about the decision he made

In addition to a Presidential record, we have come to expect these libraries to present a slice of life in America during that president’s term.  Although it was appropriate that the terror attacks of 9/11 were portrayed as the dominant events of his term, I was disappointed that I didn’t see any presentations of the technology that emerged during this time.  Yes, we’re geeks, but I think everyone can agree that GPS, smartphones, and growing access to Internet has changed our world during these years as much or more than those terror attacks, and I think they deserve a place in the museum.

It was odd to come away from a Presidential Library visit with more negative feelings than positive.  Although it’s true that we were not fans of George W Bush, we are ardent fans of Presidential museums, it is one of our very favorite things to do on the road.  This one just felt more like a commercial for the man than a museum of his life and times.  Maybe the other ones were too and I just didn’t notice? 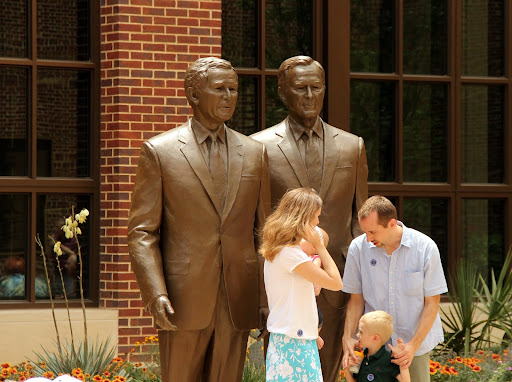 Lots of people had their picture taken with Bush and Bush Sr.
Posted by Chris Guld at 5/10/2013

Howdy Chris & Jim,
I haven't been to but one Presidential Museum, The GWH Bush museum, in COLLEGE STATION, TEXAS, on the campus of TEXAS A&M UNIVERSITY,(of course, I'm an AGGIE) so, I can't speak about the others.. That one is AWESOME and tells it like it was, then!!! Probably, the reason W's was all about the 'incursion' into Iraq was that that was the only thing the MEDIA talked about and blamed HIM for!! Did you see anybody else trying to HELP the people of Iraq??
Why everything the 'EMPEROR is doing is also W's fault, don'tcha know!!! butterbean carpenter