It is now Tuesday, May 28, and we’re still at Clear Creek.  Our plan is to leave today and travel up to Rocky Mountain National park, but don’t be too surprised if we’re still here tomorrow!

Here’s a map I made using Google Maps.  Click on it, and you’ll go to the live map where you can zoom in and out and move around.  Each icon represents somewhere we visited, took pictures, etc. 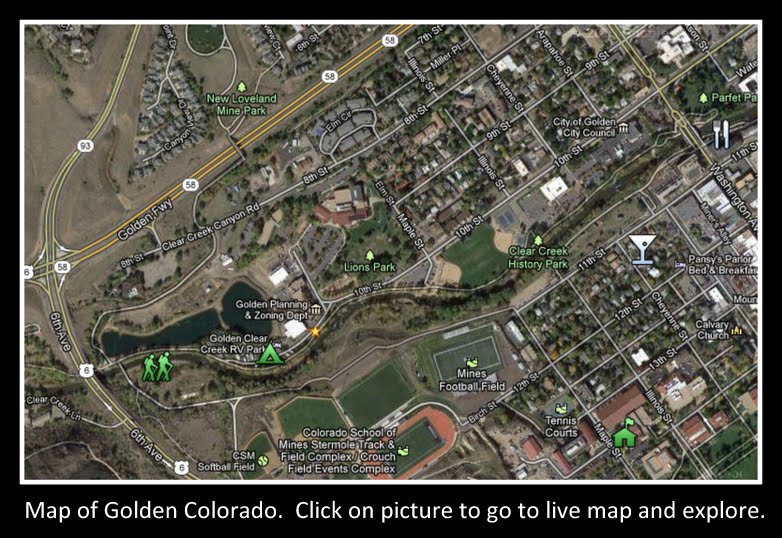 As I wrote in a previous post, we put this area on our itinerary in order to visit our friends, Diane and Andy and their daughter, Elizabeth.  But, because of a Facebook post we made, we hooked up with some other friends as well! 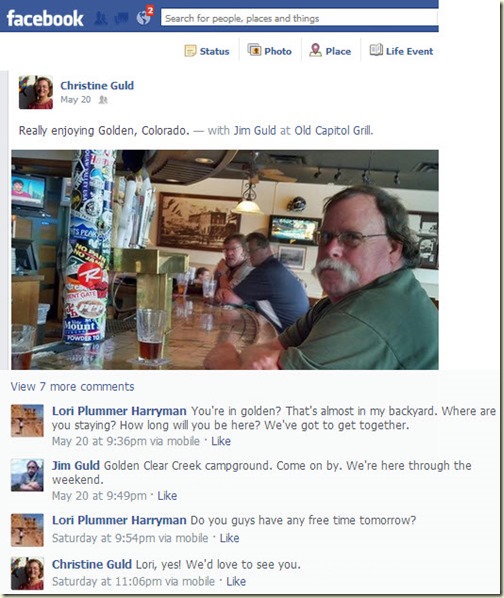 This is SOO what Facebook is all about for me.  Yes, I knew Lori lived in the Denver area, but it had been many years since we’ve been in touch.  We used to go diving in the Keys with a group of women in the 80s. I didn’t think of contacting her – but because of being ‘Friends’ on Facebook, she saw where we posted a picture from Golden and she commented.  She and her husband, Bob, came out to the RV park and we had a delightful walk and talk. 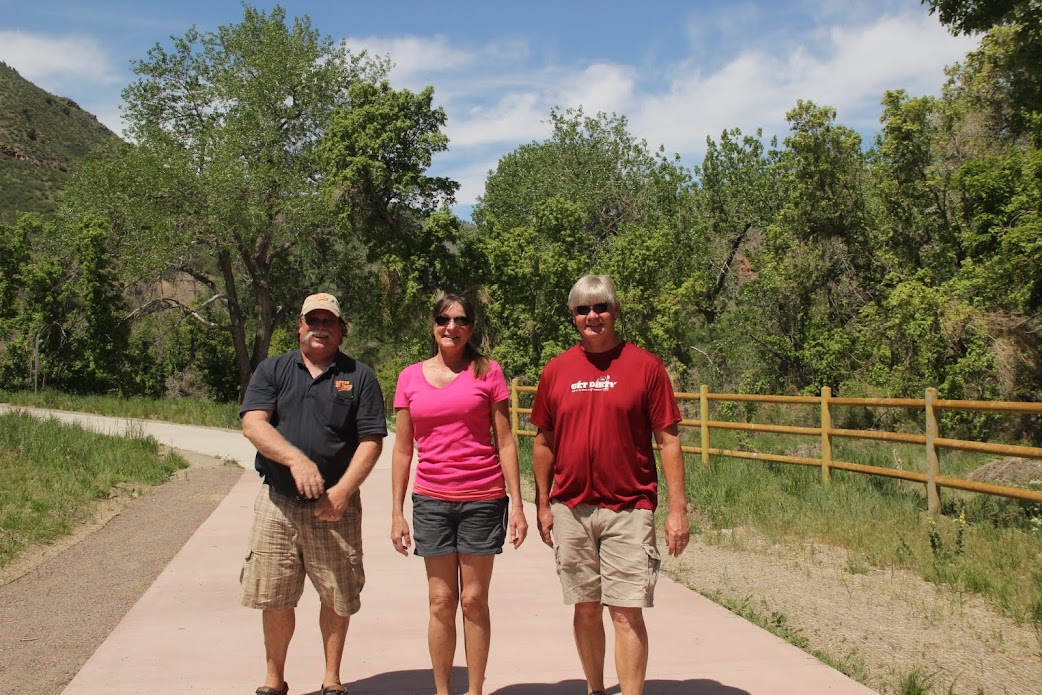 Then they invited us to their home for dinner.  What a treat! Lori is a Master Gardener (it’s a specific Colorado Certification) and that doesn’t mean just flowers!  Everything she cooks is either from her garden or fresh organic stuff.  It was delicious – and Bob grills a pretty tasty chicken too.  They manage an indoor garden as well – with lots of hanging plants in their high-ceiling living room on an ingenious system of pulleys so they can bring them down to water them.

We didn’t take any pictures at their house, but you can see and read all about their garden in Lori’s blog: MyGardenDelights.blogspot.com

Lori and Bob – it was SO good to see you!  And, thanks for the delicious meal.

I also want to mention someone we met in the RV park.  She saw our sign for Geeks on Tour in the front windows of the RV’s cab over and asked if we could help her with her digital pictures on her computer!  Uh … let me think … yes! We can do that.  So, Dixie got a 2 hour private tutoring session and she loved it!  She had a camera card with 4 years worth of pictures because she didn’t know how to get them to the computer.  I helped her download Picasa, showed her how to get her pictures to the computer, then move them into folders that made sense to her.  She also set up a web album so she could share her pictures with family and friends in Poland.  All as easy as a few clicks of the mouse now.  Before, she had been taking her camera card to a photo lab like Walgreens, printed out some photos, and mailed them to friends.  She wanted to know where we were traveling next so she could follow us and get more lessons!  It was good to meet you Dixie!  You’re a very good student. 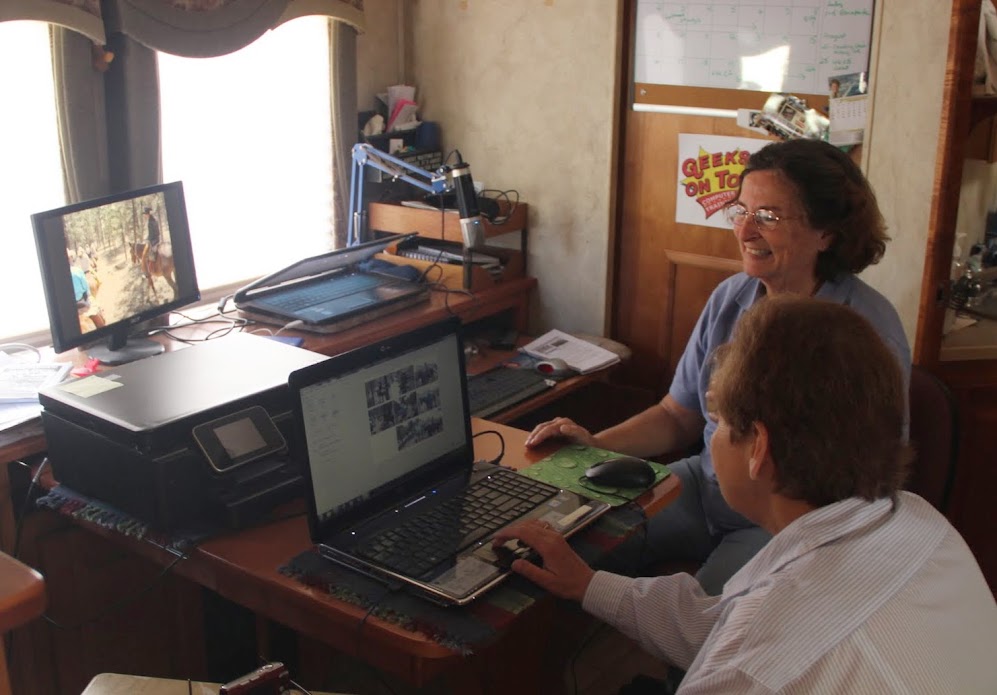 Oh yeah … I also never posted the pictures from when we visited Diane and Andy at their business – Rolling Sands Harmony.  They sell yoga supplies, meditation supplies, and other healthy things.  They started out selling some of this stuff from their RV!  When it got to be too much, that’s when they decided on the Denver area where they wanted to live.  Now they couldn’t be more settled!  A house, a 2 1/2 year old daughter, and a stick and brick business.  They’re working hard and doing well.  They also do a lot of business thru Amazon.com. 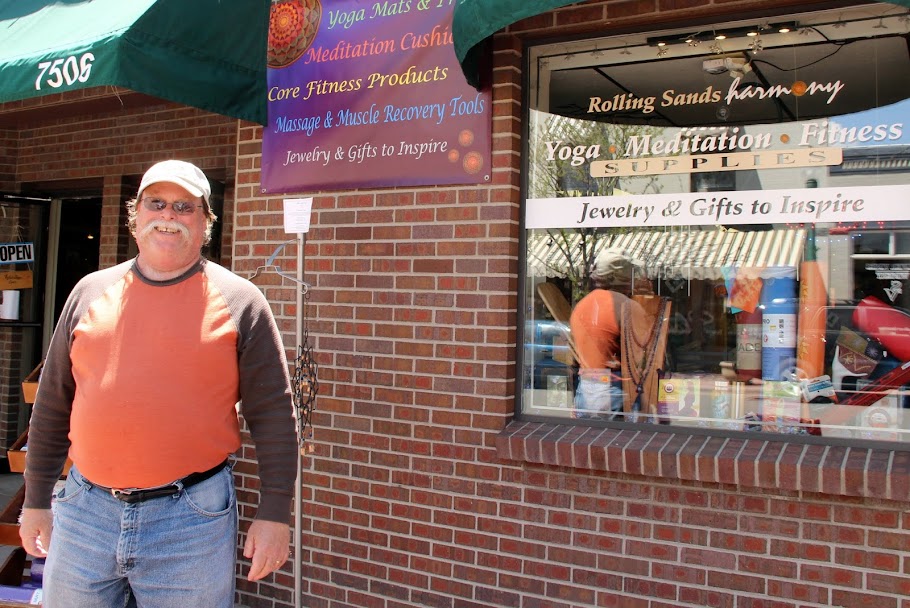 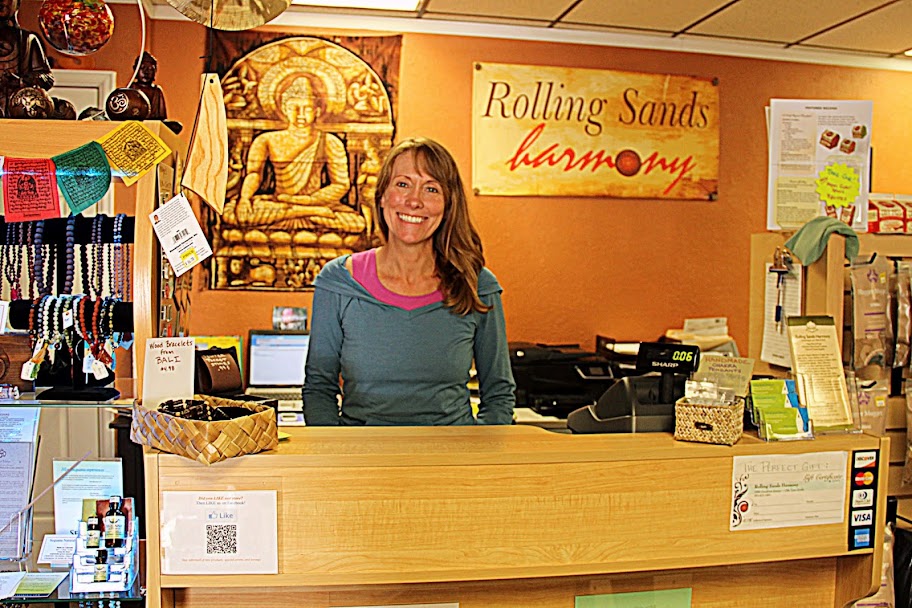 They got a shipment of product while we were there.  Jim helped do the unloading. 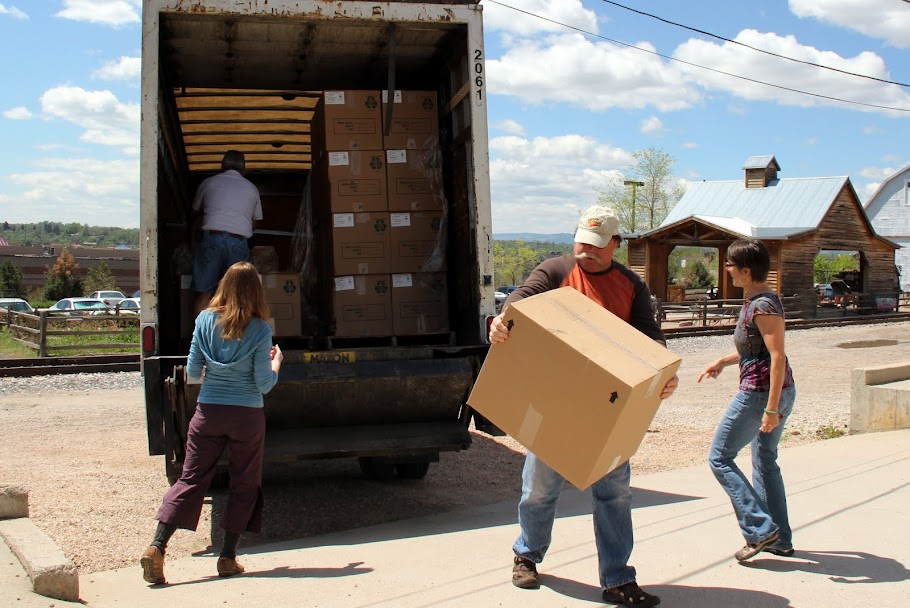 It was great seeing you guys Diane and Andy!  And, of course, to meet Elizabeth! and … Congratulations on your successful Bolder Boulder run.  While you were running – we at least walked at the Red Rocks Amphitheatre!

Rocky Mountain National Park should be glorious this time of year. . .don't forget to check out the golf course at Estes Park. . .the elk should be everywhere. . .

Hope you are doing the scenic drive from Golden to Estes Park and then on to the National Park. . .

we enjoyed every minute we were there last year. . .looking forward to your pics. . .