During the Safari rally last week I mentioned that they were taking up a collection for flood relief for the nearby city of Cedar Rapids. There were about 180 rigs here. If you figured $20 each, that would be $3600 . Then, Safari International promised to match whatever was collected. Well, the final count, last I heard was $4,100 collected. That meant a donation of $8,200!

Then, this week the Country Coach rally was challenged to beat that. Country Coach corporate promised to donate $2,000 for every coach sold this week. They sold 8! (at approx. $650,000 each) They had several other group donations as well, for a final donation of $27,000.

That is so awesome. But, unfortunately, it's just a drop in the bucket for what this community needs. The floods last month we devastating. And, it's *still* raining.

We've actually had very nice weather. In the 60s at night. Pretty hot and sunny during the day. But, for the last few nights we've had thunderstorms overnight. It wakes me up and makes me think we're in a hurricane when I can see the trees outside bent over in the wind. I can see them clearly in the shocking bright light of the lightning! It's nervewracking for me ... I can't imagine what it must feel like to people who are already bone-weary of cleaning up flood debris in their homes.

I caught a picture of the gathering storm at sunset time the other night. It almost looks like a nuclear blast, mushroom cloud doesn't it? 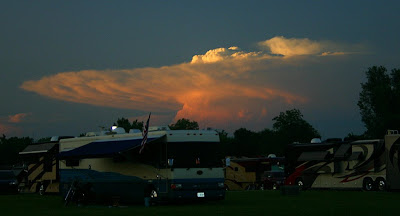 Tomorrow we're off to St. Paul, Minnesota. About 300 miles away. We'll be at the FMCA International Convention. We're schedule for 2 seminars each day for four days! Is St. Paul outside of 'Tornado Alley'? I hope!

Love the shot...thanks for sharing!!!