After the storm last night, I thought the beach might have some dramatic scenery this morning. So I grabbed my camera and headed across the street (yep, it's only 2 blocks to the beach from here - so nice.)

The storm didn't seem to make much difference in the ocean - it was more of an inland storm - but it was pretty anyway.

As much as I like taking the photos, I also like working with them in Picasa and making them look better. Like this flower photo. Here's the original: And here it is after a few clicks in Picasa: Or these birds in the wave. Original: 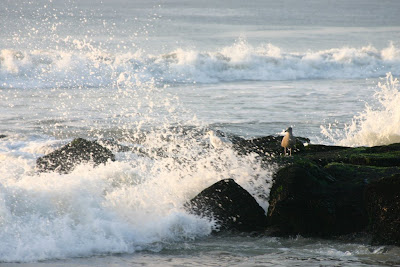 Edited version: In the bird photo, I even used Picasa 3's new 'retouching' feature to erase some white spots of water drops from the brown bird. So much fun! Lots of videos at www.GeeksOnTour.com will show you how to work with Picasa. And, you can bet there'll be lots more videos coming now with Picasa 3! One of my first jobs out of college was as a photo 'spotter' at a color photo lab in San Francisco. This meant taking a very fine point paint brush, dipping it in paints and touching up the dust spots, or any other blemishes on prints. Sometimes they were 8X10s and sometimes they were wall-size murals. I would keep the brush moist by touching it to my tongue. People told me that I was probably going to develop cancer in my tongue one day from doing this. Now I've traded the brush for a mouse. All I'm in danger of now is carpal-tunnel syndrome!
Further your computer education **Subscribe to the Free Geeks on Tour Newsletter**
Posted by Chris Guld at 9/07/2008

nice photos doesnt look like Hannah was too bad