Between a rock and a hard place, Bulger pulls us thru

​​There are a lot of one way Bridges in New Zealand. You will see a sign telling you whether you have the right of way, or the other side. If you have the right of way, go ahead,
If you don't have the right-of-way, then you need to see if there is anyone coming the other way before you cross. If the bridge is situated such that you can't see the other side, there are lights to tell you whether you can go or not. Just green or red.
Here is a photo of a one way bridge where we are waiting on our side (on the left) for the oncoming truck to go by. There was a light just to our left that was red, letting us know to wait.

In the narrow, winding road that goes thru the mountains to the Tasman Sea in the North of the South island, we encountered a new feature, overhanging cliffs (see the area in Google Maps). In this photo, the road is 2 way, we have to hug the rock on the left so that oncoming traffic can drive without falling off the cliff to the river on the right. Just past that curve, there was another where the road narrowed to one lane and we could not see around the corner. It wasn't a actually a bridge, but it operated by the same rules. There was a light pole on our side to tell us to go - green- or to stay - red. Just one little problem - they were out of order. There was a black bag over the top of the p​ole where the lights should be.

It was a Monday afternoon on this country road in the wilderness area of the south island of New Zealand, so if we don't see anyone coming, it's probably ok to go. Jim starts driving towards the blind curve on this one lane with a rock wall to his left and a cliff to his right. Oops, here come some cars. He hasn't gotten too far .. he puts the 21 foot long, 8 ft wide, ​motorhome into reverse and backs up to where he started. The cars pass by and the road looks clear again - we can't see anyone coming.
With no lights to tell us what to do, Jim cautiously inches forward. Still no one coming. Just as he turns the corner - beyond the point of no return - we see someone coming. Not just anyone. A truck. A 2-trailer cattle truck full of cattle! OMG. Jim moves as far to the left as he possibly can. I reach out and bring the side-view mirror in (it's on a hinge) to take about 12 inches off of our width and he gets as close to the rock wall as possible without scraping the side of the RV. The cattle truck comes to a stop beside us, then backs up a little in order to get a better angle on his drive. Inch by inch the truck crawls past as we suck in our breath. As the rear of the truck reaches Jim, he brings in his side view mirror and drives forward, just squeezing past. We made it.

One of the things we like to do when we're RVing is listen to books on tape. Sometimes we don't even bother with audible, and I just read it out loud. I had been doing that with this crazy book called "Baron Trump's Marvelous Underground Journey." 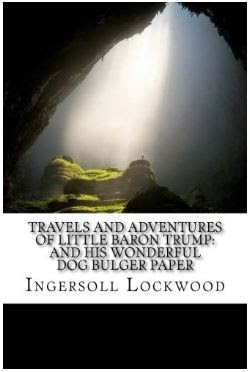 No, it doesn't have anything to do with the President's son Baron, but that odd coincidence is how the book is gaining some popularity today. It was actually written as a children's story in 1893 by Ingersoll Lockwood​. I got the Kindle version on my phone on a whim and started reading it out loud to Jim and Melinda. To our surprise, we quite liked it, so I continued reading. It is about a young man (Little Baron Trump) and his dog (Bulger) on a fantastic adventure to the underworld - a world within a world. I had just read the portion about how the young Baron had found the "Giants well" which provided an entrance to the underworld. Boy and dog successfully let themselves down using ropes. The problem is he only has one length of rope, and many lengths to travel:


​Know, then, that that was the smallest of my troubles; for, as any sailor will tell you, you only need to tie your line in what is known as a “fool’s knot,” to one end of which you make fast a mere cord. The moment you have reached the bottom, a sharp tug at the cord unties the fool’s knot, and your tackle falls down after you. My method was to lower Bulger down first, and then let myself down after him. In this way we proceeded from parapet to parapet, until at last we stood upon the very edge of the vast well​ ...

By this point in the book, we are realizing how important, and wonderful is his dog, but it gets better! After descending to what they thought was the bottom, they reach a very narrow opening known as "Polyphemus' Funnel" and the pipe was too narrow for the little Baron's body. He let Bulger down first, then bound his own arms tight to his body, greased himself up and slid into the funnel pipe. He had to twist his body like a screw to continue downward movement, but still came to a halt before coming out the other end.
...


I was at the point of swooning when I heard Bulger utter a loud yelp, and the next instant there was such a strong tug at my ankles that I sent forth a groan, but that tug saved me! It was Bulger who had leaped into the air, and catching the rope in his teeth had dragged his little master out of the pipe of Polyphemus’ Funnel!
We all fell into the same heap, Bulger, I, and the weight, fully ten feet, and very serious might have been the consequences for me had my fall not been broken by my striking on the pile of my clothing placed directly under the opening; and, dear friends, if you talked until the crack o’ doom you could not make me believe that my four-footed brother hadn’t placed those clothes there to catch me. They weren’t thrown higgledy-piggledy into a heap either, but were laid one upon the other, the heaviest at the bottom.

​It was shortly after reading this section of the book that we had the experience between the rock and the cattle truck. Do you think that Bulger was with us? Did Bulger pull us through and save us?.

Watch any episode of our Online Show on Learning Smartphones and Tablets!
What Does This Button Do?
Posted by Chris Guld at 2/20/2019