We already know that RVing is a fabulous way to travel. We highly recommend it. You don't need any hotel reservations, or train tickets. You set your own itinerary. You can cook your own meals. You can get up when you want, go to bed when you want. You never need to hunt for a bathroom. You can share a bottle of wine and and chat while watching the sunset! Sometimes you can park for free - in a friend's driveway, or on an open piece of land. Other times, it's easy, with the right app (we used CamperMate for New Zealand) to find a campground that suits your needs.

The only drawback really is that you have to drive!

Jim likes driving an RV, he's certainly had enough practice. Staying to the left required an adjustment, but he had no problem with that. But the roads were narrow, curvy, and often steep. That made it stressful. The motorhome we had was a lot smaller than the big rigs he has driven in the US, but at nearly 10 feet high and just over 22 feet long, it was still a big vehicle. Lesson learned: we should have planned to drive no more than 2-3 hours/day. When he had to drive 3-4, or even 5 he was wasted, and no fun, by the end of the day.

Here is a little movie where I compiled some photos and video clips of driving in New Zealand:
https://youtu.be/teGmZoY3VQ0


How did we pick out this motorhome?

One of the sites we used to research RVing in New Zealand was HeathAndAlyssa.com. They had such high praise for the Wilderness RV company that we didn't even look anywhere else. Since Melinda was going to be with us, we needed an RV with 2 bedroom areas. That meant that we couldn't get one of the little vans, it had to be bigger. We picked the Ranger 4 model.

The cost varies with the season and the availability. We were there in high summer season (February in the south hemisphere.) It wasn't cheap! We paid about $400NZD per day - roughly $300USD. So it worked out to $100/day each. Still well worth it for really nice accomodations and the ability to cook our own meals rather than spending for eating out. We picked up the RV in Auckland on Feb 5 and dropped it off in Christchurch on Feb 20. We drove a total of 2,150 KM (1,336 miles). Diesel fuel was just over $4/gallon ($1.599NZD/Litre) We spent $492NZD on diesel, roughly $330USD.

Here is our first look around the camper. What IS the steering wheel doing on that side?!?


Here is how the bed worked - it was really cool:
https://youtu.be/_oAcOk05DXo

How come I've never seen a dashboard device holder like this in any RV over here? It was oh-so perfect for holding my iPad, and the iPad, with Google Maps, made a perfect GPS.

We sprang for the extra $10NZD per day (about $7USD) for the Internet service. That got us unlimited data with a cellular provider chosen by Wilderness. There was an antenna on the roof, and a router in the closet. I'm not sure how many devices were allowed to attach, but we had at least 4 online at any given time. Just like cellular Internet in the US - it was not always available. It ranged from high-speed, excellent service to non-existent. I'd say it was good about 65% of our trip. Still well worth it. Jim's Pixel phone, and my iPhone were on Google Fi which works Internationally with no adjustments. Sometimes, when the RV WiFi didn't work, our Google Fi did. And, sometimes nothing worked.

Melinda first traveled in New Zealand by camper van about 20 years ago. She remembers being able to just pull off the road anywhere that looked nice and spend the night. Something that has become known as "Freedom Camping." Other people have also told us that Freedom camping is the way to go in New Zealand. Well, not anymore. We only parked in one Freedom camping area, 2 driveways of Melinda's friends, and the rest were commercial campgrounds. 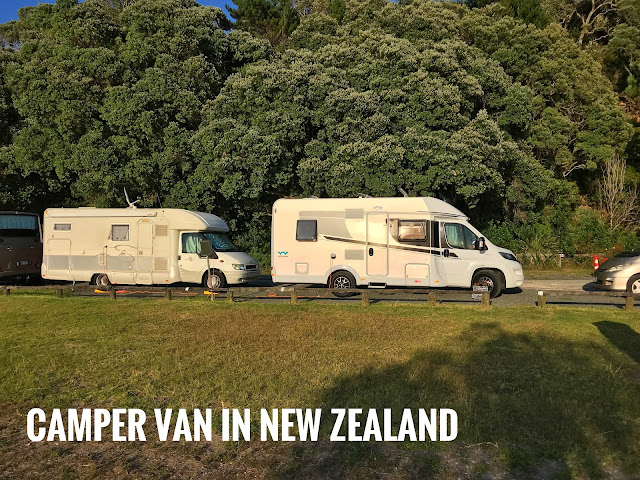 The prices ranged from $15NZD/night to $45 ($10-30USD) Now, that doesn't sound bad until you learn that it is per person, not per RV like we're used to. For the most part, campgrounds were similar to US campgrounds. One difference was that none of them had sewer at your site. That's because the RVs used cassette toilettes. You had to remove the cassette and take it to where the dump drain is. It was a simple enough matter - the only problem was that the capacity was so low. Even in our little Roadtrek, we can go a week in between dumps. The cassette was full in about 2 days of similar use. At least that's how it seemed to me. 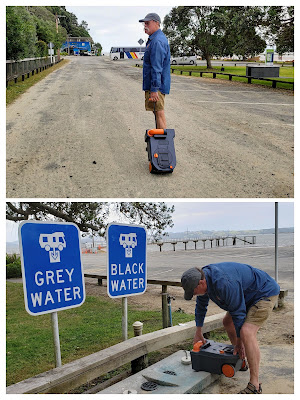 Another difference is how they cater to car/tent campers by providing group kitchen facilities. Stoves, refrigerators and dishwashing facilities along with tables and chairs for dining. Pretty cool.

All in all, the RV was a great way for the 3 of us to travel together. We made it! If just a little worse for wear ... Melinda and I were happy to give our drive-weary chauffeur a shoulder to lean on. :-)

Watch any episode of our Online Show on Learning Smartphones and Tablets!
What Does This Button Do?
Posted by Chris Guld at 2/22/2019