Melinda's introduction to New Zealand was many years ago when her husband, Laird, took a sabbatical from his college professor job to study indigenous cultures in New Zealand. They spent 6 months traveling and met lots of people - one of whom was Makere (pronounced MA-ku-ray). Makere is an elder of the Waitaha people - considered to be the earliest arrivals to Aotearoa (New Zealand) and generally included in the term Māori, referring to the native peoples of the country. Melinda has visited Makere in New Zealand many times and Makere has traveled to the US and visited Melinda as well. They are old friends.

When we planned this trip, we certainly hoped that we would get to meet her, and we were thrilled it worked out. Especially when we learned that she lives on Golden Bay, right next to Abel Tasman National Park! That was one of the few places Jim and I had on our must-see list. We were able to park the RV right in front of the Marae (kind of a Maori community center) where Makere lives and she was the best tour guide we could imagine! She even arranged a Pōwhiri, the welcoming ceremony in the tradition of the Māori/Waitaha. We felt really special when a dozen or more Māori of all ages from the Marae gathered to greet us. First was a reception line where we touched noses with each person. It's called "hongi" and it is the traditional greeting of the Māori. Then there were some short speeches from the elders. Jim performed the role of our elder! Then more singing after which, keeping with the tradition of hospitality, we were invited to share dinner (kai) with them. 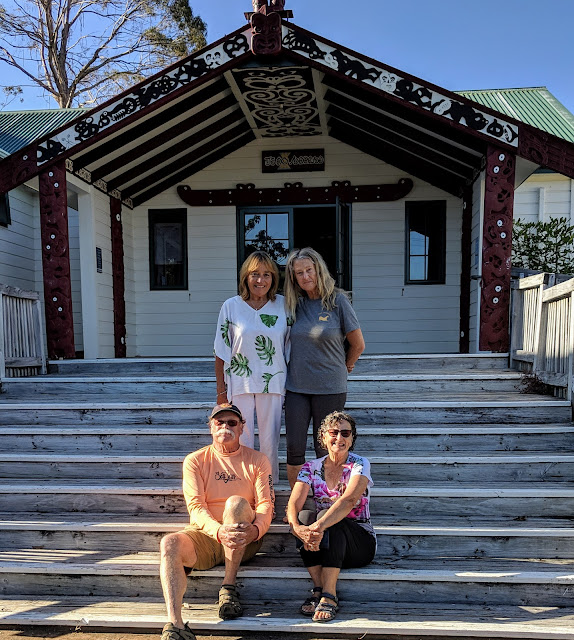 After dinner, we went with the group to hike to a sacred waterfall, while Melinda and Makere stayed behind to catch up with each other. Luckily, it wasn't as strenuous a hike as the last waterfall we visited, since we didn't have too much time before dark. It was a gorgeous walk to an adventures-in-paradise worthy waterfall. 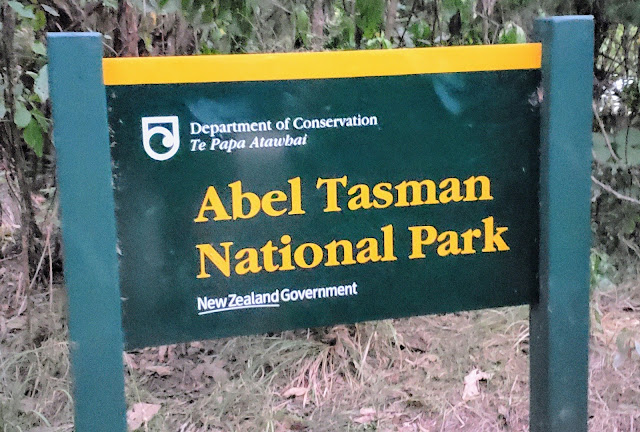 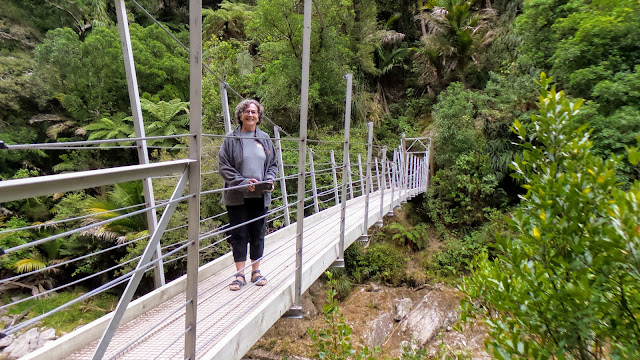 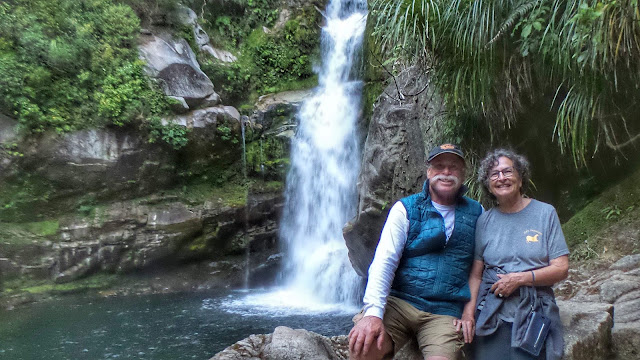 I didn't think it could get any better than that, but the next day, Makere took us to a sacred spring... This is the biggest, clearest spring I think I have ever seen - and I've seen some big, clear springs!

All the while that Makere was driving us around, showing us sacred places and all the beauty of her home, she was telling us her stories, stories of her ancestors, their history and their mythology. I was so entranced, I asked if any of this was written down - and she gave me her book: Whispers of Waitaha - Traditions of a Nation!

While Makere was telling us this special story, I tried to capture some of her voice. Here is the result. If you watch it, you will hear part of the Waitaha story of creation - how the ancient ones came over in dual-hulled canoes called Waka. When the 2 Waka were broken by storms, 7 whales came to the rescue and the Waka then formed the islands now known as New Zealand.

After taking us to a great place for lunch, she let us have a little nap, then drove us in the other direction over a mountain on a dirt road to a secluded beach called Totaranui. Just a few months ago, when Prince Harry and Meghan visited New Zealand, this was one of the places they were taken, and Makere was there to greet them. Now she's taking us there. Are we special or what?! Well, Melinda anyway. 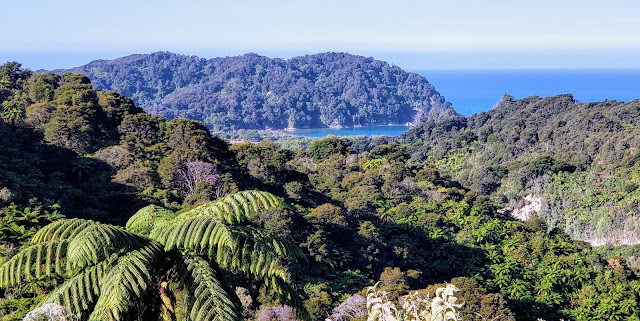 There's lots more to see and do in the area, but we had to hit the road and get the RV back to Christchurch in 2 days time. Here's Makere reviewing the map with Melinda and setting up our itinerary of things to see between Golden Bay and Christchurch.

Kia Ora and Thank You Makere! It was a beautiful and memorable visit, we hope you can visit Florida and let us return the favor someday.