Named after Hercules, this is the other city besides Pompeii that was destroyed when Mt. Vesuvius erupted in 79AD. Most people have heard of Pompeii and would plan to visit there to experience this history. We learned that Herculaneum is actually better preserve, but mainly, it was on our route.

The main difference we learned about the preservation is that, in Pompeii, those who excavated and restored the site used a technique to inject plaster into the places where the skeletons were found. This acted like a mold and the results are more lifelike figures of all the people who perished in Pompeii. Herculaneum did not use this technique. The skeletons are still in their natural state and therefore, provide more scientific history.

Think about it ... if you visit a cemetery, there may be hundreds of lives represented there, but they are from different places and they died at different times. In Pompeii and Herculaneum, you have thousands of people all killed at the same time. Their remains give us a picture of a moment in time for entire families - the children, parents, grandparents, etc. Scientists studying these sites were able to learn a lot about the culture in 79AD.

If you're interested in learning more, that means me :-) Here are some links:

The first think you notice at Herculaneum is the depth to which it was buried. In this photo you can see how far down they had to dig to expose the ruins. (that's Mt. Vesuvius in the distance behind the trees at the top right. 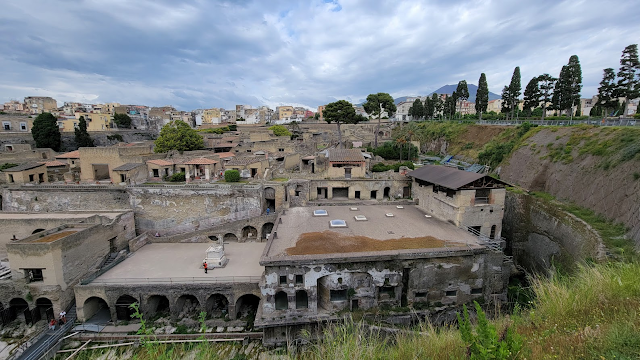 We had a nice day on our visit, a bit overcast, but then it wasn't too hot. It was interesting to see Mt. Vesuvius in the background. After walking down and down the long walkway, the first sight is the rooms full of skeletons. It's hard to imagine the horror. 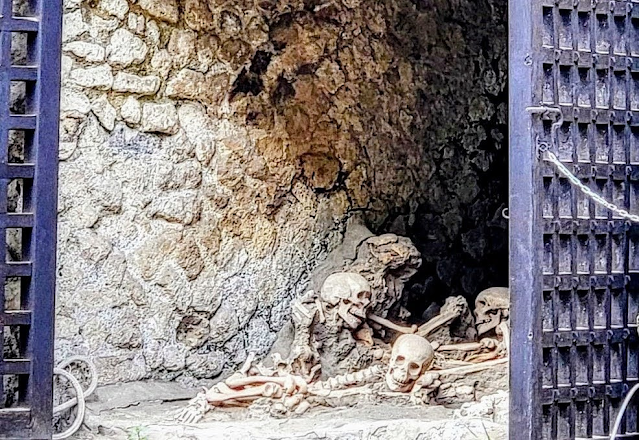 We did a fair amount of walking to get from the train station to our room, then to the Archaeological site. Getting our steps in today - about 15,000.
After Herculaneum, we're back on the train, headed for Rome!

Love the scenery! Thanks for sharing those photos.

Excellent post. I really enjoy reading and also appreciate your work. This concept is a good way to enhance knowledge. Keep sharing this kind of articles, Thank you. computer repair near me