The rally was over on Sunday morning with a farewell breakfast. But a few people were still hanging around Sunday night, so Jim got out the projector and screen to show 'home movies.' It seems like everyone was taking lots of photos, so we got our our video camcorder and took quite a bit of video during the week. Jim spent most all day Sunday editing it so we had about a 45 minute show for folks who were still here.

Somebody made popcorn and we had a few laughs watching the events of the week on the big screen. 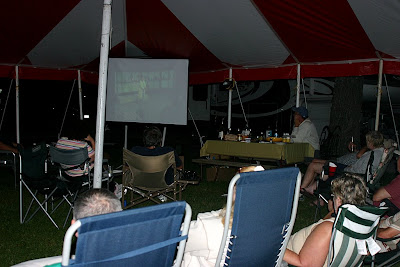 Although far from a professional production, the video does a pretty good job of documenting the week, especially the entertaining parts, and a few people said they'd like to buy a copy. So Jim spent some more time burning it to DVD and adding a menu etc. If you're one of those people, you can click here and, for $20, you can have the video for your very own! You can see lots of photos on the rally group photo album.

Our first thought was, hmmm, maybe we've hit on something else we can do at rallies to make money!? But, I don't think so - too much work. This rally was pretty special. We only did one seminar so we had more time to participate than usual. And, it was an especially fun rally - lot's of entertainment and audience involvement makes for good video. Although it was about the smallest rally we've been to, I think the participation in each event was exceptional. Most everyone attended every event, and there was only one event planned at any given time. Many larger rallies have so many different things going on that it's a small percentage of folks that go to any one thing. And, we certainly couldn't cover it all. 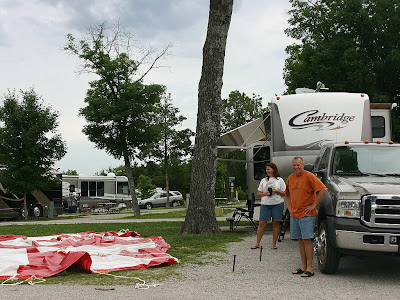 This morning they tore down the tent, it's really over now. That's Howard and Linda standing in front of their rig. They did a truly awesome job of organizing this, their first rally. I heard nothing but rave reviews from everyone. It's a nice bunch of folks, all brought together by Howard and Linda's website, RV-Dreams.com. In addition to Howard's daily blog, and dozens of pages of useful RVing information, there is a forum and chat room that has built the friendships among them. GOOD JOB RV-Dreams! Here's the short version of the video - on Youtube: