It was 2 weeks ago today that we went out to Denny's for our Earlybird Toastmasters club and ended up bringing 2 people back to our house. Since that day it's been just Jim and me and occasionally Jim's son Devon would come over.

The alarm rang at 6:15 this morning to wake is up for our toastmasters meeting ... Online this time. We love our Earlybird toastmasters group. It's been going for over 30 years and Jim and I have been members for well over 20 of those. We always look forward to seeing each other while enjoying breakfast, and we are thrilled with how well they've all made the transition to the online world, using Zoom 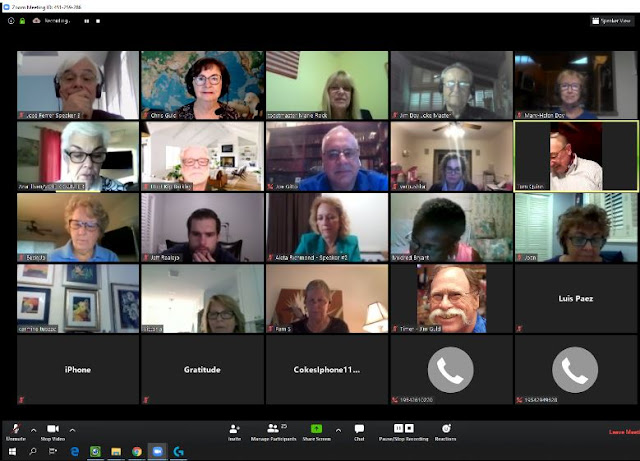 • DTM Mary Helen wistfully misses the good ole days when instead of a fancy silicone baster, she resorted to used paintbrushes stored in her garage for basting the turkey.  As a result, her children developed second-to-none immune systems.  This comes in handy today…

• Returning TM Mildred praised the versatility of the kitchen spoon, which included effective disciplinary action used against unruly children when she was growing up.• Former EarlyBird member Victoria lauded the multi-tasking features of the slotted spoon – doubling up as a toilet plunger and subsequently becoming a garden dirt mover (the virtual room virtually sighed with relief that it didn’t go back to hanging with the other kitchen utensils)…. Pfiuuuu….

• TM BeckyJo vividly described wildly waving a wooden fork during a passionate self-righteous argument with a spouse and breaking off its prongs, slowly, slowly and one-at- a-time for emphasis.  It truly gets your point across – try it!  She Won Best Table Topics Award.

• Returning TM Lisa, for lack of the word “spatula” in her culinary vocabulary,  kept calling the utensil a “cake batter spoon”.  Everyone is invited to her home for a cake-battered-spoon cake when sequestration is over.And then we zoomed on to the prepared speeches….

• TM Tom recounted his virgin Court appearance representing a client who called her husband by her boyfriend’s name “in the spur of the moment” – or shall we say “in the sperm of the moment”?  He Won Most Improved Speaker Award.

• TM Aleta – loyal member in good standing rejoining us for the first time since she left Florida in the 80s- told us about her lucky breaks in life, where she currently gardens a multi-acre property in Paradise and works as a Labor Mediator, a profession she absolutely adores.  As TM Marie said,  all these years (to some of us) you were only an enigmatic name in the Club Roster!!  And paradoxically, now you are virtually real!!

• Former EarlyBird TM and lasting friend – my brother Jose– delighted us with a speech about his 60th birthday party – celebrated twice, in Madrid and also in Fort Lauderdale.  Picture slides from the occasion brought us all hope for good parties still to come.  He Won Best Speaker AwardAs for evaluations…

• TM Lisa applauded TM Tom for his engaging speech which had humor, the element of surprise, and a good reminder that cheating doesn’t pay if you can’t get their names straight.

• TM Joe applauded TM Aleta for her uplifting speech which exuded optimism and positivity in a spirit of gratitude.

• TM Jeff praised Jose for his charisma and his ability to use technology to make his speech more vivid and descriptive.  He Won Best Evaluator Award.

The Word of the Day wasSEQUESTER, noun1.      Isolate or hide away2.      General cut in government spending

We had a delightfully varied attendance made up of former EarlyBirds who are freed from the rigors of commuting in traffic, friends of Jose, family of Jose, fans of Jose.  Let’s keep it going!  Guests, keep coming back, we love having you!Next Thursday, same time, same Zoom id.  And, once again, thank you to our Tech Wizards for making it all possible.Virtually yours,Ana

Ok, back to work.
I am way behind on my computer work. The most pressing thing on my agenda is to finish the show notes for last Sunday's Episode 188 of our YouTube show "What Does This Button Do?" It takes me several hours to complete this task. Sometimes I breeze thru it and sometimes it's like pulling teeth. Today was somewhere in between, but I got it done. Episode 188 - How to get your slides into Google Photos  The notes are only available to our premium members.

Jim made me lunch - a tuna melt sandwich. He is the sandwich king! And I love toasted sandwiches.
OK, now I need to get the notes into .pdf format and send an email blast to all our members that it is ready. But first ... hey, we're sequestered right? We have lots of time on our hands right? We can binge watch any number of shows on Amazon, Netflix, Hulu, or HBO. I've been watching Homeland and I think I deserve a break to watch a couple episodes this afternoon. Damn that show is intense!

Jim spent a little time with Devon today. He showed him the newly rearranged studio room and how it is now ready for carpeting. Maybe they can get some carpeting, watch a few YouTube how-to videos and we'd pay Devon to do the work. That would be great since Devon's work has all been cancelled for the foreseeable future.

Now Jim is looking up recipes for Chicken Marsala and my mouth is starting to water. I think I'll get that email blast to our members done and call it a day.

The good news
People are walking and playing tennis! We have a wonderful circular walk around our neighborhood. At just over 1 mile, it's short enough to be easy and long enough to get some exercise. It was a spectacularly gorgeous day. We went for a walk just after an early dinner. 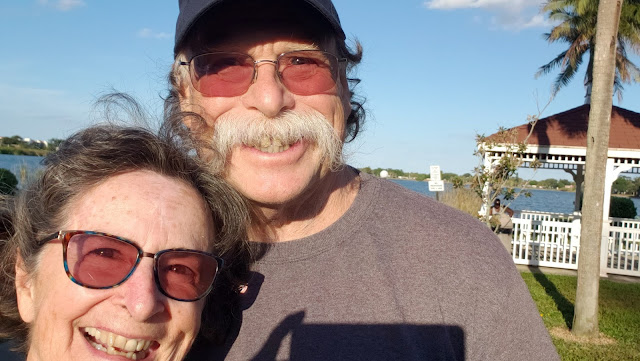